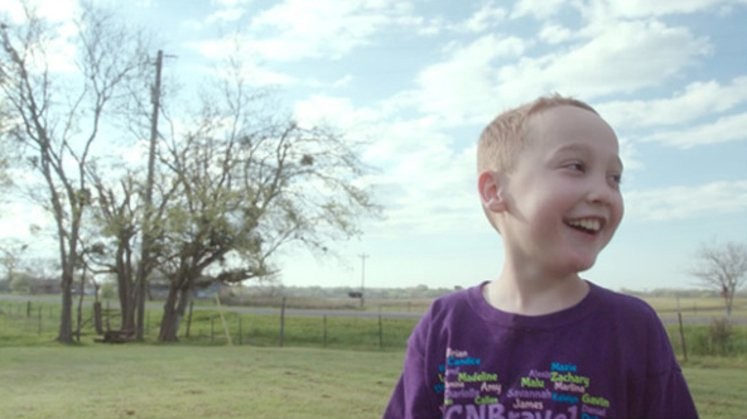 Courtesy DocuFest/ChasingHopeFilm.com
Director Justin Wilson's (not pictured) documentary short film Chasing Hope follows the lives of six Texas families using medical-grade CBD oil to treat a family member's intractable epilepsy. It's one of 42 films screening during DocuFest from Thursday, Oct. 1-Sunday, Oct. 4.
This is the 33rd year that Bart Weiss, the founder and artistic director of Dallas VideoFest, has brought his team together to put on the annual documentary festival DocuFest. Putting one event together every year since 1987 is challenging enough.

"Every year there are new challenges," Weiss says. "We've always taken on something that's never been done before. We were one of the first to go online."

But, putting together a festival during a pandemic that's shutting down movie theaters and forcing other film fests to go entirely online is an eventuality that no seasoned organizer could predict.

"We are like forever on the edge of trying to do something different, but I think it's going to be great," Weiss says. "I still don't feel 100 percent comfortable going to the theater even though I love movie theaters, but going to the drive-in, you can still feel comfortable and you're not just watching it online."

This year's DocuFest, which runs from Thursday, Oct. 1 through Sunday, Oct. 4, will be virtual, and moviegoers can also watch more than 40 films from the comfort of their car at the Tin Star drive-in theater in Trinity Groves.

DocuFest 33 includes an eclectic and generous collection of documentary films that explore unique themes, subjects and facets of human life. The festival fills a void for people who love going to the movies while also giving filmmakers like Heather Ross, who directed For Madmen Only: The Stories of Del Close, a place to screen their films to an audience they can see reacting to their work.

"Our [South By Southwest Festival] premiere was canceled an hour after we delivered the film, which was pretty devastating, and we're just starting to enter the festival world in this new landscape," Ross says. "We're grateful to fests like this one, who will bring the physical community and excitement of the festival experience together at the drive-in, since that's the magic and reward for what we do as filmmakers working outside the studio system."

The festival's collection covers areas like politics, internet culture, improv comedy, medicine and (of course) the coronavirus. The latter is chronicled in Coronation, directed by celebrated artist, activist and filmmaker Ai Weiwei who tells the story of Wuhan, China, the first city hit by the coronavirus in early 2020. Weiwei's film lays out the harrowing struggle to combat the growing virus through the eyes and voices of the people who lived through it.

"It's a very, very powerful and dynamic film," Weiss says. "It's something people really need to see."

Cleaning crews sterilize the grounds of a Wuhan hospital in China from a scene from director Ai Weiwei's documentary Coronation , which will be part of this year's DocuFest.
Docufest/AWW Germany
Other notable titles include the highly acclaimed Sundance Festival Award-winning Feels Good Man about comic artist Matt Furie's legal fight to take back his most famous cartoon creation Pepe the Frog from the alt-right it tried to co-opt the anthropomorphized amphibian for its campaign of hatred. Weiss says he discovered the movie directed by Arthur Jones before it scored a distribution deal through the Alamo Drafthouse, but Feels Good Man's message of hope and love is so entertaining and strong that he still wanted to screen it.

"Normally during a festival run, we would not show something that's been shown before, but I think it's really great," Weiss says. "It shows how this comic strip became a cultural meme and how he tries to bring it back and it speaks to the moment we're in."

Ross' film For Mad Men Only: The Stories of Del Close explores the life and philosophies of the innovative and influential Chicago comedian who's considered the pioneer of improvised comedy through a series of stories he was drafted to tell for DC Comics.

"He was a lover of B-movies and spectacle, and his stories traffic in those languages, so it's very fitting," Ross says. "In addition, we use a lot of wild visuals in the film —  from handcrafted collage animations to exploding the micro-dot-matrix texture of the comic book stories that anchor the film. Having those visuals blown up to drive-in-size is a visceral opportunity that I never anticipated but am very excited about."

Other films include Gay Chorus Deep South, which chronicles the San Francisco Gay Men's Chorus tour of the Deep South in the contentious shadow of the 2016 presidential election, and Jimmy Carter: Rock & Roll President, which tells the amazing story of the 39th president's popular rise to the White House through the power of a generation's musical movement.

The festival also has a collection of short documentaries and the always entertaining CatFest, showing some of the funniest, saddest and cutest collection of kitten and cat films.

Docufest 33 will also screen documentaries from Dallas and Texas filmmakers such as director Miles Hargrove's Miracle Fishing. The film tells the story of environmental journalist Tom Hargrove, who was kidnapped by the Colombian rebel group FARC in 1994. The movie unfolds the story with the images captured by a camcorder that recorded the family's negotiations and meetings with the rebels.

"It's an incredibly powerful story," Weiss says. "It's a magnificent film that's very well told and a very endearing story. It was supposed to play at [the Tribeca Film Festival in New York City] and it almost didn't happen because of what's going on because of COVID. So we're really lucky to get it."

Weiss says he's excited for this year's lineup and it's not just because they were able to hold a festival for a viewing public that isn't just watching from a computer.

"I really love what we're doing this year," Weiss says. "I wish I could bring it to people in a theater but given where we are in this moment where there's a lot of anxiety about health and the election coming up ... we're being in the house way longer than we should be. We open up our eyes to the world and let you see things from another point of view about things you're not thinking about."

Weiss is excited because his festival is able to provide something more than just a chance to go to the movies again. It's about reaching out to audiences and helping them see things and explore emotions they haven't been able to access for a long time.

"It's not escapist, but it's inspiring," Weiss says. "It speaks to our goodness and our heart."

The comic strip character Pepe the Frog goes through an emotional journey from Internet meme to co-opted symbol in Feels Good Man, one of the many films being screened at this year's DocuFest.
DocuFest/Wavelength Productions