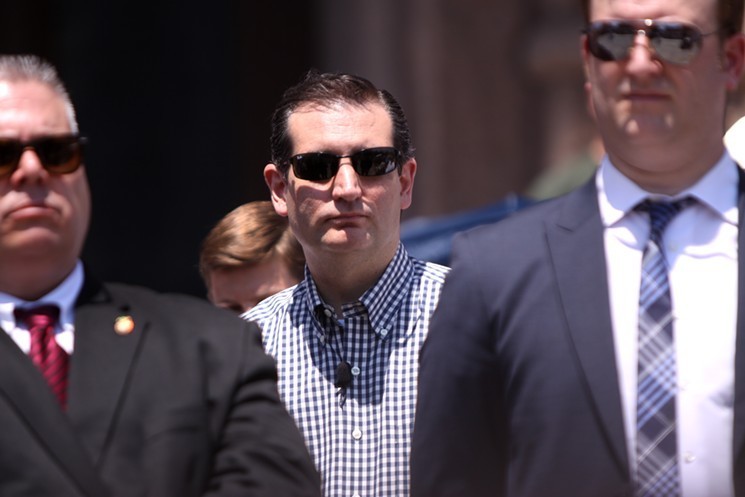 Gage Skidmore
R.I.P. R.B.G., Ted Cruz is gunning to fill your seat.
Supreme Court Justice Ruth Bader Ginsburg’s death could have been an opportunity for Republicans and Democrats to set aside differences and collectively mourn an extraordinary life. Leave it to Texas Sen. Ted Cruz to mess it up.

Tuesday, Cruz blocked a ceremonial resolution that would have honored Ginsburg’s life, The Texas Tribune reported. Cruz said he disagreed with the language that his Democratic colleagues included regarding the justice’s supposed last wish: that her seat remain vacant until after next year’s presidential inauguration.

“Under the Constitution, members of the judiciary do not appoint their own successors,” Cruz said.

U.S. Senate Minority Leader Charles Schumer said that turning the justice’s “dying words” against her was “so, so beneath the dignity of this body.”

Thanks to Cruz, the resolution did not pass.

Since Ginsburg’s death last Friday, Cruz has made several appearances on news programs to demand that her vacancy be filled prior to November’s election.

Many have been quick to remember, though, that he argued the opposite after Justice Antonin Scalia died in 2016. Cruz and the GOP-led Senate blocked then-President Barack Obama’s nomination to the bench.

Cruz’s arguments may be inconsistent, but if you watch him in action, “Lyin’ Ted” is a decent litigator. Unlike some of his Republican colleagues, he can actually piece together a coherent argument.

So, let’s clear the floor and allow Cruz to debate himself on assorted subjects.

After plugging his upcoming book, Cruz argued that a nine-member Supreme Court in 2000 settled the election dispute between George Bush and Al Gore. He said that an equally divided court could make the election drag on for weeks or even months.

"That is an intolerable situation for the country," he said. "We need a full court on Election Day.”

2016: After Justice Scalia’s death, Cruz fought to prevent Obama’s pick, Merrick Garland, from proceeding to a Senate vote, according to Politico. In fact, Cruz argued that the Republican-majority Senate could block Supreme Court nominees “indefinitely.”

Cruz also claimed, falsely, that there is a “long historical precedent” of limiting the number of seats on the bench, according to PolitiFact. Guess there’s not a need for a full bench, after all.

Nominating a Justice in an Election Year

2016: After Scalia’s death, Cruz insisted that there was a “long tradition” of abstaining from nominating justices during an election year, according to The Hill. He also said that the election should be a “referendum on the Supreme Court.”

2020: Following Ginsburg’s death, Cruz told Fox News that it should be up to President Donald Trump and the Senate to fill the seat ahead of November’s vote — referendum be damned.

Sept. 10: Earlier this month, Cruz seemed excited after Trump added him to the shortlist of potential Supreme Court nominees. He called the consideration “humbling and an immense honor.”

Sept. 14: Four days after he thanked Trump for the opportunity, Cruz clarified his position, according to The Texas Tribune. Becoming a justice, he said, is “not the desire of my heart.” That’s a pretty poetic way of putting it.

2019: Cruz boycotted Nike after the brand nixed plans to sell footwear sporting the Betsy Ross flag, which many say glorifies slavery. In addition, he called boycotting part of Americans’ right to free speech, according to Salon.

2020: After the CEO of Goya, a Hispanic foods company, expressed support for Trump, many upset customers began boycotting the brand. Cruz said that the move was an attempt to suppress free speech, the A.V. Club reported.

2016: When Cruz was running for president in 2016, The Washington Post reported him as saying:

"[Trump] is a pathological liar. He doesn't know the difference between truth and lies.”
"In a pattern that is straight out of a psychology textbook, [Trump] accuses everyone of lying."
"Whatever lie [Trump’s] telling, at that minute he believes it."
"The man is utterly amoral."
"Donald is a bully. Bullies don't come from strength; they come from weakness."


2020: Now, Cruz is one of Trump’s biggest cheerleaders, The Hill reported.

“So many of us are so sick and tired of Republicans that roll over and whimper when encountering the slightest resistance,” Cruz said. “And I think probably the best characteristic about the president is he’s got a backbone.”