Taylor Adams
La Tarte Tropézienne in downtown Dallas
Over the weekend, some more facades of businesses downtown were boarded up. It's not an unfamiliar sight at this point after the riots last summer, but now more businesses have glass covered in preparation for Election Day.

Jan Marien, co-owner of La Tarte Tropézienne on Main Street, says he was called to a meeting with the Headington group Monday, when tenant businesses in Headington properties were given with the week’s plan.

Headington Cos. could not be reached for comment Monday.

“I’m not too concerned to be honest. I really do not know what to expect,” Marien said. “We’ve been kind of … brainstorming what scenario could happen. Other than maybe isolated incidents, I don’t really see a big protest or anything going on. Now that being said, nobody knows, so it’s better to be ready just in case.”

Other businesses downtown have different looks today: Twisted Trompo on Commerce Street was boarded by Saturday — a manager there tells us it was the call of Metropolitan Condominiums, which is the building Twisted sits in.

"It's in preparation of any potential civil unrest," said Noel Rodriguez, a manager at the Metropolitan. "We just don't know what will happen. I hope all of this effort is for nothing." 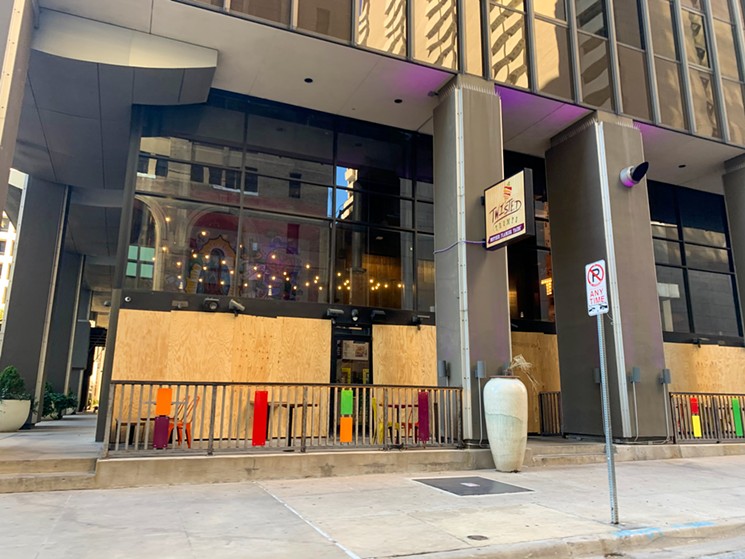 The Metropolitan started boarding up the first floor Saturday before Election Day.
Taylor Adams
The Observer reached out to other businesses that were boarded up by midday Monday, but some owners didn’t want to talk. One business took precautions, but the proprietor responded with, “Nothing to talk about, it is short and temporary.”

Kourtny Garrett, president and CEO of Downtown Dallas Inc., said she understands some may feel the need to prepare from their experiences in May, but the organization is encouraging businesses to not board up yet and simply stay on alert.

“Since then [May], we have all worked so hard to reopen downtown. ... We have worked hard to reopen and maintain confidence in the market,” she said. “We’re asking that businesses are not boarding or barricading just yet until we have ... reasons to do so.”

DDI works directly with law enforcement: If there is any threat, the organization sends it to business owners as well as social media.

“The educated prediction is that we will have a peaceful Election Day here in Dallas,” Garrett said.