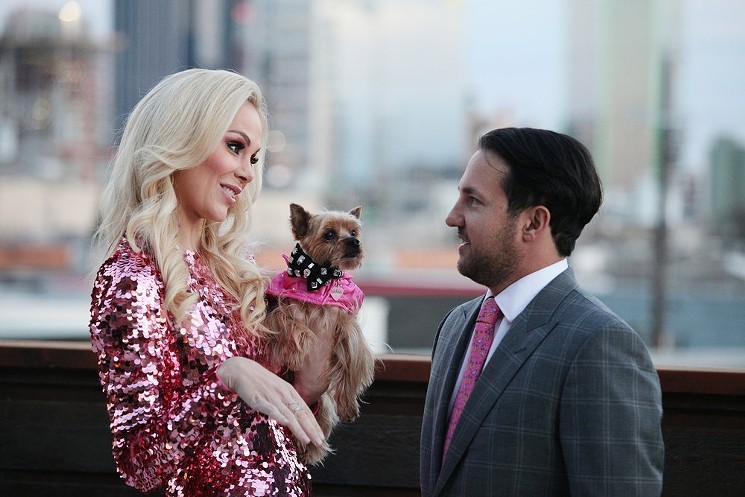 courtesy Bravo
This is Court Westcott with his wife, Kameron. He gets it.

Behind every glammed-up woman with Botox on The Real Housewives of Dallas, there's a husband sighing his way through the show and life. It's clear: He just really hates it here.

Some husbands hate it more than others. Some husbands actually don't hate it all — they're eager for the screen time.

And because we love pitting men against one another, let's rank them from He Loves Being Here to He Just Really Hates it Here.

5. Travis Hollman
Stephanie Hollman's husband is Mr. Career Man. One time, D'Andra Simmons needed career advice and Travis was all, "Oh, yeah, I know about careers," and there was a whole thing with them and a meeting that never happened because D'Andra had to dye her hair. Travis was pissed about it because as a Career Man, you don't waste time because of hair (rule number one of careers). Travis has a company that builds lockers, which is as interesting as it sounds, but when he's not building lockers, he's making to-do lists for his wife. Fun! He Enjoys This Side Project.

4. Court Westcott
If there was an award for Husband Who Just Gets It, it would go to Court Westcott. He's like yes, you need me on camera to explain to my wife, Kameron, that a dead dog's spirit doesn't move to the new house with us? Got it. He's on camera just enough for the audience to be like "ohhh, that's Court, Kameron's pink polo-wearing husband who is rich but we don't know why," but not on camera long enough for us to really get to know him and learn maybe that he kind of sucks (always a risk). Congrats to Court. He Understands TV.

3. Eduardo Brittingham
It is pretty clear that Eduardo doesn't know where he is most times. The camera will be on him while his wife, Kary Brittingham, talks to him about how she wants to make her own money from her jewelry line. Eduardo usually nods along because he's trying to figure out where he is, while sitting there and eating guacamole. It's actually quite admirable in a way, but we get the feeling that he just really hates all of it. Pretty sure that's what marriage is! He Is Looking For A Way Out.

2. Daniel Moon
There is nothing to say about this man. He and his wife, Tiffany Moon, met in a club, and the next thing he knows, he's on a reality TV show about middle-aged women who drink too much. This is why clubs are dangerous, kids! Scary! Please, He Needs Help.

1. Bryan Redmond
Bryan Redmond's face should be on milk cartons all over the country right now. Viewers of RHOD have not seen this man who goes by "Bryan Redmond" in years. He very well could be missing. The last time he had any substantial moment on the show was when he and Brandi fought at Texas de Brazil in Addison and Brandi left the restaurant crying. Since then, he's been gone. He, like, really hates it here. He Is Literally Missing.