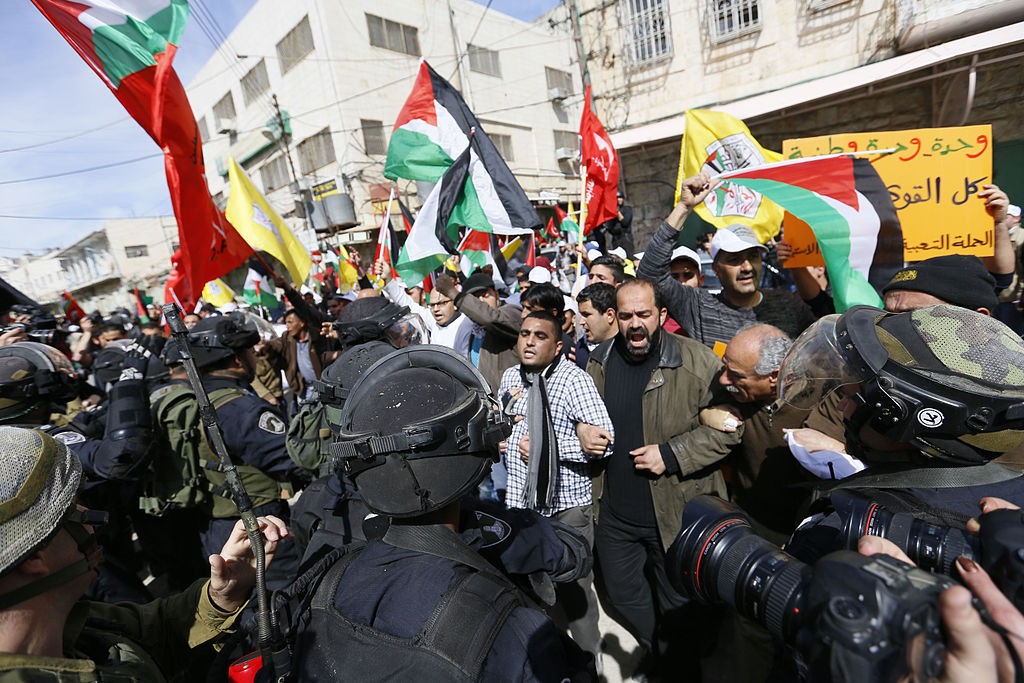 Mustafa Bader, CC BY-SA 3.0, via Wikimedia Commons
Someone should tell the people writing Texas school curricula that it's possible, even easy, to find images of Palestinians who aren't masked and holding assault rifles.
What’s in a simple quiz question? If you’re a Palestinian student in Texas, the answer may be a good reason to take offense.

Published by Jarrett Publishing Co., part of a Texas Essential Knowledge and Skills (TEKS) lesson used by schools statewide includes a quiz question that raises eyebrows: “Which is an important cause of terrorism in the Middle East?”

The correct answer? “Many Palestinians believe terrorism is justified against Israeli occupation.”

The education material recently sparked controversy after the local chapter of the Council on American Islamic Relations (CAIR-DFW) put out a press release calling on Allen ISD to ditch the curriculum for unfairly characterizing Palestinians.

As of Thursday, an online petition circulated by CAIR-DFW had gained more than 2,900 signatures.

CAIR-DFW learned about the Jarrett Publishing Co.’s not-so-savvy Middle Eastern political analysis after a Palestinian-American student at the Lowery Freshmen Center recently encountered it in the classroom. Disturbed by what she read, she told her father.

Luay, whose last name is being withheld to protect his daughter's identity, said the problem had started earlier in the school year, when a teacher implied that the Sept. 11 attacks were the result of Muslims angered by warm ties between Israel and the United States.

His daughter felt bullied and singled out, he explained. "But the straw that broke the camel's back was when she took the quiz," Luay told the Observer. "I picked her up and she came to the car crying. The only right answer she could choose was that she was a terrorist."

Luay wanted to figure out what was behind the curriculum. He reached out to CAIR-DFW and also examined the book from which the lesson came.

"We needed to make sure also that those racial statements didn't just come from the teacher but also from the curriculum," he said.

"I picked her up and she came to the car crying. The only right answer she could choose was that she was a terrorist." - Luay, father of an Allen ISD student.

In the TEKS section titled “The Palestinian Viewpoint,” a photo depicts a white-gloved man armed with an assault weapon. A member of the Palestinian armed group Hamas, the man wears a black mask decorated with Arabic calligraphy.

Elsewhere, the curriculum refers to Palestinians who support a resolution to the conflict with Israel as “moderate Palestinians,” a description the text never applies to Israelis. The implication, Luay feels, is that any Palestinian who isn't "moderate" supports terrorism.

The district has since met with Luay and has scheduled a meeting with CAIR-DFW. In a letter to the nonprofit, Allen ISD said it had been in contact with the publishing company and relayed concerns about the material. Moving forward, an updated version of the lesson will be used in the classroom.

Rather than "many Palestinians," the updated material says "some Palestinians support terrorism," for instance. Additionally, the lesson now carries a photo of a "peaceful Palestinian demonstration" in the place of the Hamas member previously used to illustrate the section.

"Allen ISD strives to create a safe and inclusive learning environment for all of our students," David Hicks, the district's chief information officer, told the Observer by email. "AISD will continue to listen to our parents and community members and work together for the betterment of our schools."

Still, Luay hopes for an apology and perhaps an alternative lesson that teaches the material in a more nuanced way. He doesn't think switching "many Palestinians" to "some Palestinians" really fixes the problem.

Faizan Syed, CAIR-DFW's executive director, said he was upset that the current lesson material had been in use since 2013. "For seven years, nobody saw that as a problem that the Palestinian viewpoint was illustrated with a Hamas photo," he told the Observer, describing the curriculum as "anti-Palestinian" and "dehumanizing."

Syed said biased educational material is common in Texas. "When it comes to Islam, Muslims and minorities, there's a lot of curriculum like this," he said. "Every few months we get another one of these curriculum updates from one of these schools, and of course, we have to be the ones to bring it to the school's attention.

"It really isolates Muslim students and makes them feel they're targeted."

The way Syed sees it, the coursework is part of a much bigger epidemic: Muslim students in the Dallas area face widespread discrimination and bullying.

In 2020, the nonprofit published its first-ever report on the matter, and it found that nearly half of all Muslim students had experienced bullying in public and non-Islamic private schools around the Dallas-Fort Worth area. Worse still, nearly a fifth of that total had been bullied by a teacher or an administrator.

The report also noted that Texas schools have started to address problems in the state's core curriculum, but that many haven't yet adopted updated curriculum and educational materials. "The continued use of outdated materials in schools reinforces misconceptions about Islam and further perpetuates Islamophobia," the study said.