iStock/DallasO75219
According to a city audit, deficiencies in how the Dallas Police Department stores evidence and other property pose a moderate to high risk.
When Mark Hughes, a North Texas activist, approached the police after falsely being named a suspect in the 2016 Dallas shooting of several law enforcement officers, he turned over his car keys, AR-15 rifle and camouflage shirt as evidence.

Sometime after being cleared by the Dallas Police Department, he got his gun and car keys back. His camouflage shirt is still presumably in the hands of DPD’s Property Unit, which stores the department’s evidence.

A picture of Hughes in the shirt posted by DPD was seen by people around the world as it circulated in national and international media. But Hughes hasn’t seen the shirt since that tragic night in July 2016.

This happens with a lot of evidence, actually, according to an audit of DPD’s Property Unit.

About 70% of sampled found property was still in storage at the property unit, even though it’s eligible for disposal or release to the owner, according to the audit. For these items, the statute of limitations for associated offenses have expired; there’s no clear offense linked to the item to warrant prolonged storage; they’ve exceeded storage lengths established per the unit’s standard operating procedures; or there was no request for hold of the item by a case detective.

There were 148,615 found property items in the unit’s storage as of July 27. If the sample data is correct, this means the storage of about 104,031 of these items (70%) is not justified and in need of review for disposition or release.

The audit found 23% of the sampled property was authorized for disposal but was still stored by the unit.

Worse still, the unit has outdated and incomplete operating procedures for disposition activities and stores property and evidence at unsuitable locations. 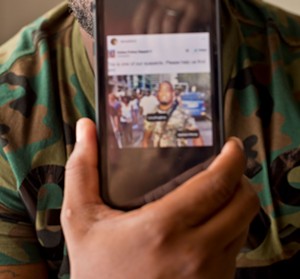 Mark Hughes was mistakenly named as a suspect in shootings in downtown Dallas perpetrated by Micah X. Johnson on July 7, 2016. He never got his camouflage shirt back from DPD after handing it over as evidence.
Mark Graham
The city auditor recommended that DPD revise and update its procedures, implement an automated system to notice when an item can be reviewed for potential disposition, and ensure property and evidence are protected from theft, tampering and environmental exposure at auxiliary locations.

The purpose of the audit was to evaluate how adequately and effectively DPD stores property and evidence. The city auditor looked at operations from 2018-2020. It was released March 11.

District Attorney John Creuzot said evidence damaged due to storage deficiencies could be thrown out of cases in certain circumstances. Say a wooden chair is submitted into evidence in a criminal investigation, Creuzot explained. If that chair is stored outside, exposed to the elements, rotting and decaying, “You’re going to have a hard time getting that admitted into evidence,” he said.

A car stored at the auto pound, also exposed to the elements, may have some damage over time, but not significant enough to make it inadmissible in court. “It depends on what it is and what the circumstances are,” Creuzot said.

Evidence that was demonstrably tampered with is often deemed inadmissible, he added.

Having an incomplete disposition process has kept warehouse space from efficiently being cleared for incoming inventory. This has led to the unit reaching its storage capacity. What doesn’t fit is stored at offsite auxiliary locations that don’t have the same level of security controls or environmental protection as their main storage space.


“It sounds to me that DPD is recognizing that its practices might not be the best.” John Creuzot, district attorney


The unit’s disposition process is manual. DPD selects items to review for potential disposition based on the level of the associated offense. Items with low evidentiary value are first targeted for review.

Limited-duty officers or crime technicians review the items using DPD’s case management system. If it’s eligible, the reviewer then sends a request letter to the assigned detective or investigator to authorize the item for disposal or release. However, this review process is not documented in the unit’s standard operating procedures.

“Therefore, there is no formal guidance for the department personnel to carry out review of items for disposition, and management cannot ensure consistent monitoring of the process,” according to the audit.

Three out of five peer city police departments use a system-generated review and notification process instead of a manual one like DPD’s. This practice is recommended by the International Association for Property and Evidence. Having an incomplete review process is not.

Because of space limitations, property and evidence are also stored at a decommissioned patrol station and the Dallas Auto Pound. District Attorney John Creuzot said evidence damaged due to storage deficiencies could be thrown out of cases in certain circumstances.
City Auditor
The items at the auxiliary locations are exposed to potential theft, tampering and environmental damage because they are not suitable for storing police evidence.

“At the decommissioned patrol station, there are exposed pipes, missing ceiling tiles, and evidence of prior water leaks near areas where property and evidence are stored,” the auditor said in the report.

At the auto pound combustible property and evidence is exposed directly to the weather elements. In another area at the auto pound, items are stored on wood pallets surrounded by patches of mud caused by rainwater that floods the area.

If these items are damaged, they could be made unrecognizable or unusable for evidence purposes.

Additionally, neither location is equipped with video surveillance equipment to monitor who accesses property and evidence. The property unit management said they requested funding for security cameras at these locations, but it hasn’t been approved yet.

According to the audit, these shortfalls pose moderate to high risk to the department. But the city manager and DPD don’t agree with that assessment.

In a memo to the auditor, City Manager T.C. Broadnax said, “While we agree with the recommendations to improve the processes related to reviewing property and evidence for potential disposition, we believe the risk is moderate as the current process has not affected the property’s and evidence reliability.”

DPD is adding six civilian staff to help with property and evidence, making repairs and adding fencing to the auxiliary locations and is working to install surveillance equipment this year. The department will also revise its procedures and will look into implementing an automated system.

This isn’t a new problem for DPD, and it’s not the first time they’ve said they’d fix it. An audit of the property unit in 2008 and a follow-up in 2009 found virtually the same problems.

“The combined effect of these internal control deficiencies results in a risk that significant errors and/or fraud could occur and not be detected within a timely period by employees in the normal course of performing their assigned functions,” according to the 2008 audit.

That year, DPD implemented a new browser-based inventory management system called Evidence Manager. They still use this system, as well as a records management system to determine if items are eligible for disposal or release. But the problems persist. “It sounds to me that DPD is recognizing that its practices might not be the best,” Creuzot said.

However, he said he’s confident Broadnax, Assistant City Manager Jon Fortune and DPD Police Chief Eddie Garcia will get these problems ironed out. “These are doers, and if there’s something that needs to get done, they’re gonna take care of it,” Creuzot said.

If they do, maybe one day soon Mark Hughes will finally get his shirt back.