DJ GSpook Remembered for His Legacy in Latino Hip-Hop

"He was the same person," says Dallas DJ J-Kruz, who met GSpook when they worked at K104 FM and 97.9 FM The Beat. "In radio, especially for jocks, good jocks are themselves. People come up to me and say, 'Man, you act the same way you do on the air,' and I take that as a compliment. You want to be authentic, and GSpook was authentic."

GSpook's vibrant personality and oratory talent were constantly on display even when the "On the Air" sign was off.

"All you did was laugh around the guy," says comedian and friend George Redd Speaks, who knew GSpook since their days attending North Crowley High School. "He was always on. It was just his personality. Me, I turn off a lot. I know when to be quiet and chill and when it's time to perform, so I know how to turn it on and get the response I want with it. Spook woke up with it. He wasn't trying to impress anyone. That's just who he was."

The memories of the Latino DJ, who called himself "The Krazy Mexican," left an impression on almost everyone who met him on a professional and personal level. His closest friends and fellow radio personalities shared some of their favorite GSpook moments in the wake of his death on March 14 at the age of 39.

GSpook got his start in the Dallas radio scene thanks to a radio contest held by K104 in 2001. Randy Watson, also known as Cat Daddy, was the nighttime DJ at K104 who judged the contest. He remembers the colorful voicemail GSpook left as his initial audition.

"He was instantly attractive with his delivery," Cat Daddy says. "He had a natural gift of gab and a nice flow and cadence. He was super smooth in Spanish and English." 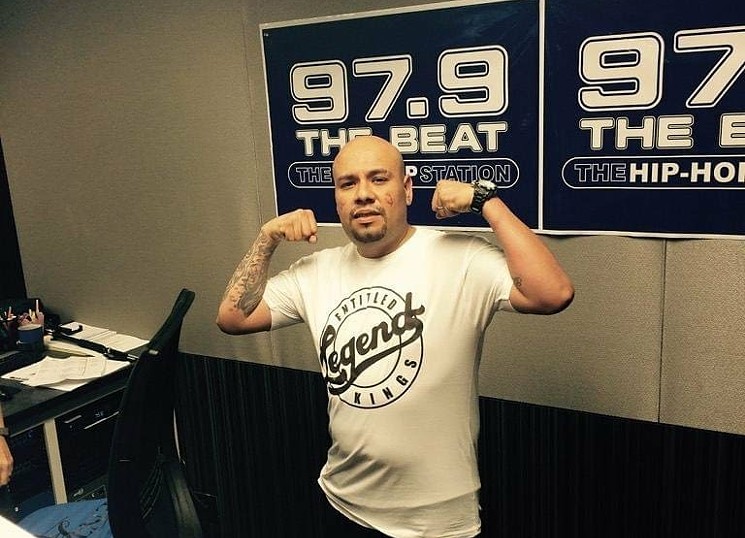 DJ GSpook (Pedro González) spun records and rhymes for K104 FM and 97.9 FM The Beat and was one of both stations' first Latino on-air talents.
George Redd Speaks

GSpook won the contest and an on-air spot for the following five years on K104. His natural talent and ability to spit a steady flow of vibrant words on the airwaves helped him find an audience as the first Latino personality on the Dallas hip-hop station.

"He was unique to K104 and the fact that we brought him up and knew he was a special talent because he was speaking Spanish and English, something K104 never had," Cat Daddy says. "To showcase that and have it be embraced, it's a major move for him, the station and the city as a whole."

He also helped showcase and motivate new talent from the local, Latino music community including rapper High Note (Carlos Garcia). High Note says he remembers the day GSpook took him under his wing and helped him get his start on the air. The duo went on to record their own songs together, such as the Dallas Cowboys rap fight track "Cowboys Life" and produced skits for shows on YouTube and the local Univision affiliate.

"GSpook saw an opportunity to grab another fellow, young Hispanic in an industry that wasn't really meant for us and coached me all the way up," High Note says. "I've never met anybody more selfless than he. He could be working on a song with somebody for a day, two days straight and hear someone freestyle and would be like, 'Yo, he needs to be on this song.' We'd remake the composition of the song and then we'd have two people, three people, six people on the song."


Lil Brownie, a former K104 DJ who worked with GSpook in Dallas and now hosts the morning show for B103.9 FM in Fort Myers, Florida, says even when the late DJ was being "goofy" with his co-workers, he still took the work very seriously.

"All we would do is laugh and eat in the studio — but he also had a seriousness when it came to radio," Lil Brownie says. "I feel like he taught me real radio."

Redd says GSpook could inspire people to be more outgoing and bring them out of their guarded side in the off-hours, even before he became a recognizable radio voice.

"He would get us into clubs and we weren't even of age and he knew everyone at the club," Redd says. "He'd do this thing called the whippet contest. All these guys are dancing with big muscles and stuff and Spook didn't give a fuck and he would win because he'd do this cholo, LA dance and the girls just loved him. His personality was bigger than anything. I remember I'd watch that and see that confidence in him and to tell the truth, I probably absorbed a lot of the confidence he had from him."

Spook's large, silly personality also served him well in his the original comedy he wrote and filmed with friends for TV — or just for fun.

"Spook was like a big kid," J-Kruz says. "He wasn't scared to act like a goofball or make noises or do voices. Those videos and skits mean more now more than ever. He always brought the creativity out of me and reminded me not to take myself too seriously."

Sometime after he left K104 and picked up a new time slot on The Beat, the first sign of medical problems started. Several of GSpook's friends say he admitted himself to the hospital in 2017 due to chest pains that led to a serious heart attack. He fell out of consciousness and became legally dead twice before falling into a coma. Redd says doctors told Spook's family that "he'd be a vegetable for the rest of his life" and advised them to take him off life support on Christmas Eve. 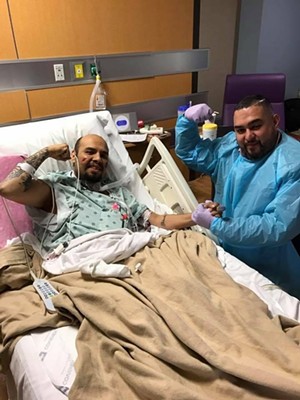 GSpook (left) gets a visit from friend George Redd Speaks (right) during the Dallas DJ's hospital visit in 2017.
Courtesy of George Redd Speaks
Somehow, GSpook awoke from his coma two months later and made a miraculous recovery.

Soon after, GSpook went back to work this for The Beat. He continued to work on the radio and his various music and comedy projects, and even talked to Redd about making a move to stand-up until earlier this month when he was checked into the hospital a second time for sudden numbness throughout his body.

Redd says doctors diagnosed him with a rare staph infection called Methicillin-resistant Staphylococcus aureus (MRSA). Doctors put him in a second, medically induced coma to see if his body could fight off the bacterial infection, but he never woke up from it. Once again, doctors advised his family to let him go.

"I knew the night before they were gonna do it," High Note says. "Honestly, I was hoping it was like the first time and he would shake it, blindly betting on how he'd wake up like the same situation. It didn't really set in until his mom started making plans on what to do with him."

GSpook died on March 14 and services were held the following weekend. A family friend started a GoFundMe page to help raise money for his funeral expenses, and it collected more than $15,000 in donations. Redd and High Note also hosted a comedy benefit show to raise more donations for GSpook's family at Trees in Deep Ellum.

The Dallas hip-hop community didn't just lose a talented DJ and musical mind; Lil Brownie says it lost one of its best friends and most helpful supporters.

"He was a good father in person and friend," she said. "In the community, he liked helping people so I think that's why everybody felt his loss because he did so much for other people. If you ever needed him, he was always there. He always had your back. He was always just a phone call away."