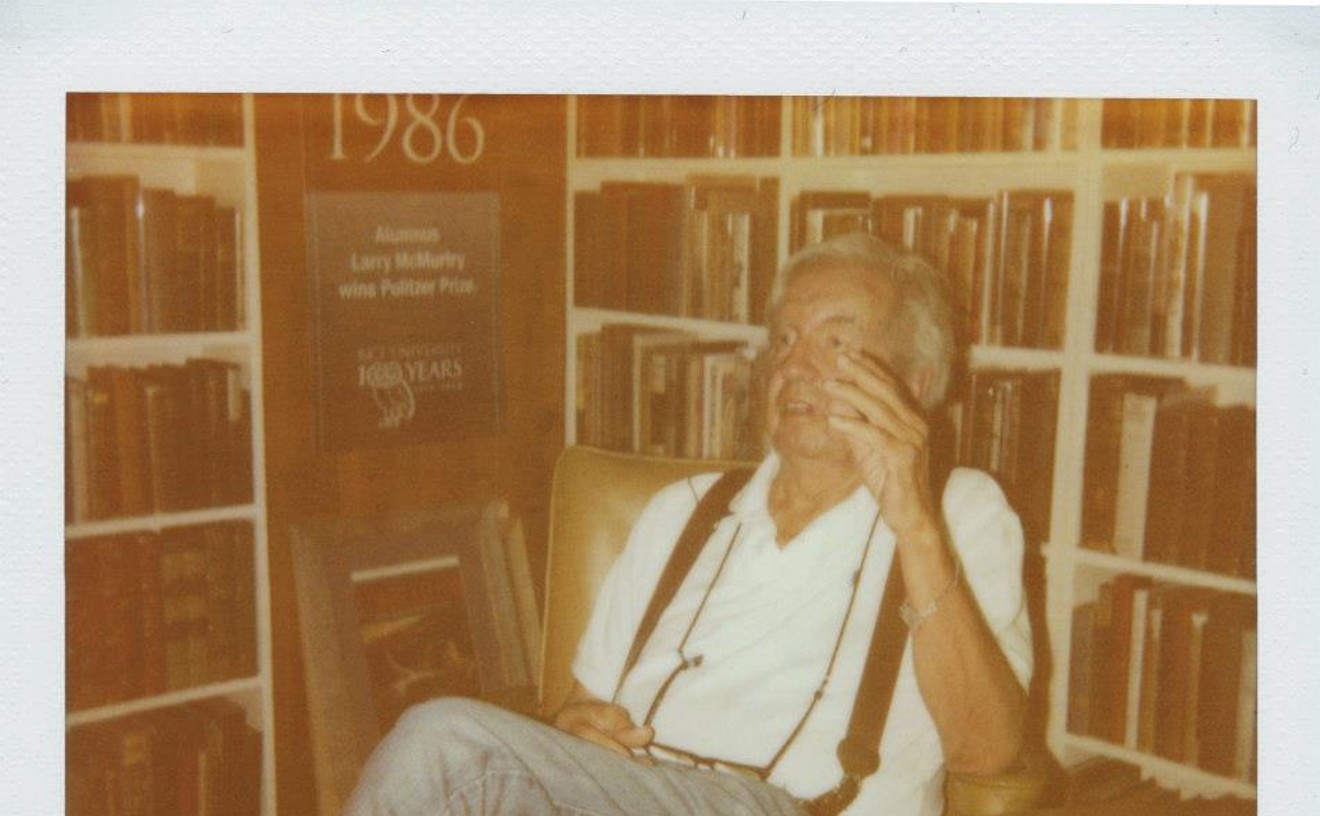 Daniel Rodrigue
Author Larry McMurtry died last Thursday at age 84. Dallas students have been chasing his myth for years.
Larry McMurtry was regularly seen out and about in his hometown Archer City,  25 miles southwest of Wichita Falls. He was easily recognizable in his usual ensemble: jeans, a Dr Pepper polo and an air of humility. He didn’t see himself as a star novelist who influenced authors around the world, and — at the very least — attracted tourists to the small Texas town; he humbly referred to himself as a "minor-regional novelist."

McMurtry, a University of North Texas alumnus and Pulitzer Prize-winning author, died last Thursday at age 84. He was known for acclaimed novels Lonesome Dove, Terms of Endearment and The Last Picture Show, but McMurtry was also a screenwriter who wrote more than 30 screenplays for fan-favorite Western films, including Lonesome Dove and Brokeback Mountain, for which he won an Academy Award for Best Adapted Screenplay.

His work has influenced journalists and authors across the nation. Michael J. Mooney, a New York Times best-selling author, considered him as more than a visionary.

“Lonesome Dove is one of the best novels ever written,” Mooney said. “But he was also a visionary and inspiration, a true lion of letters. He’s gone, but his books, movies and influence will live forever.”

McMurtry welcomed aspiring young writers from the University of North Texas’ journalism program into both his home and bookstore, Booked Up, every summer. It was an unforgettable, inspirational pilgrimage for aspiring wordsmiths, especially on those nights the bookstore was open past operating hours.
click to enlarge 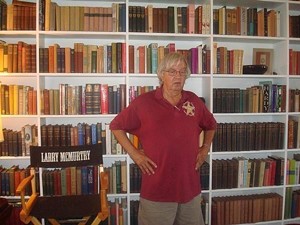 The author at his Archer City bookstore, Booked Up.
Valerie Gordon Garcia


But the man himself was still a bit of an enigma. Meeting him was like coming face-to-face with a fictional character who's jumped out of the page onto real life, a surreal moment that many students in UNT's Mayborn School of Journalism were fortunate to experience. Valerie Gordon Garcia was part of the first class of students who went on the Archer City trip in 2004 and didn’t meet McMurtry herself until years later.

“Larry was an elusive idea,” Garcia said. “It’s like he was a ghost or something because he wasn’t there. Everybody was talking about him and everybody has stories about him — nobody’s meeting or seeing him.”

The summer writing program was under the direction of George Getschow, a retired UNT professor who knew him quite well, and who could not be reached for comment. Getschow chose Archer City as a yearly destination because of its rich literary spots and natural scenes. Christian McPhate, also a UNT teacher, experienced Archer City and its people many times, but never met McMurtry.

“By the time I got there, I mean, it was a very immersive experience,” McPhate said. “You interact with the town folk. We know we'd have barbecues out and cookouts out in their backyard, readings from stuff that we had written during the workshop. We definitely immersed ourselves into the culture and kind of tapped into what Larry, I guess, experienced when he was growing up there, and I guess some of the writers were definitely inspired by the same culture and the scenery of the place and the remoteness of the place.”

In Archer City, students would interact with the locals (who referred to visitors as “the writers”) and practice observational writing. Booked Up housed hundreds of thousands of rare and obscure finds, and the small-town environment made for great exercises in story writing and narration.

“One assignment was to just observe the town and bring back a scene, so I skulked around and finally went and sat in the ruins of the old movie theater,” said Dianna Wray, an award-winning writer and editor who traveled to Archer City as a student in the 2008 and 2009 summer programs. “And I imagined all the movies that would have been shown there and what the place must have meant to McMurtry when he was growing up in Archer, and I wrote about that.”

Daniel Rodrigue, a journalism and photography professor at Dallas College, remembers the experience during two summers, in 2008 and 2009, when he visited Archer City and saw McMurtry’s dedication to his craft.

“He would leave the bookshop open, and it was just such a generous thing, I thought back then, to welcome all those college students,” Rodrigue said. “Seeing his writing-desk typewriter, he had this turquoise Hermes 3000 that he famously thanked when he got an Academy Award.” 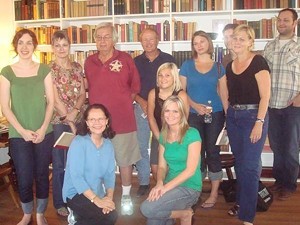 Larry McMurtry posing with students in Archer City.
Valerie Gordon Garcia
McMurtry must have loved that typewriter. He typed most, if not all, of his stories on it. The Hermes 3000 sat on his writing desk with stacks of typing paper alongside it.  He was an avid reader who kept books in every room of his house.

“He has, like, this private library, which is out behind his house where he has all kinds of rare books,” Rodrigue said. “One of my favorite memories of Larry is when we’d be in town for that class, he’d leave the bookstore open all night and we got to tour his family home where he wrote Lonesome Dove.”

McMurtry’s beloved bookstore made the perfect setting to capture the McMurtry myth, sometimes as he stocked books. The warehouse-like space made a nice escape for bookworms who often traveled to catch a glimpse of the author. Sarah Ruth Alexander, a Denton artist who's made many day trips to Booked Up, recalled meeting McMurtry one time she was there.

“I talked to him, and somehow we ended up talking about Ranchman in Ponder, a steakhouse,” Alexander said. “And I didn’t want to bother him but talk to him for a second. He was just working and putting books away. He was approachable and didn’t seem curmudgeonly at all.”

McMurtry once described Archer City, where he got his greatest work done, as a “bookless part of a bookless state.” He made sure books would live on, along with his legacy, in that bookless land.

“He was so open, a shock after hearing how particular he could be,” Wray said. “He was what you would hope he would be. We were book people, and he liked book people.”