Yes, Some of Dallas’ Best Food is Out in the Suburbs Alison McLean
Peking duck with steamed buns makes for a great family-style meal at Little Kaiping in Richardson.
I’ve been the Dallas Observer’s food critic for five years now, and as you might expect, I’ve gotten some hate mail.

After one editorial in 2019, an angry reader blocked me on Facebook (and one restaurant owner wrote a reasoned, non-angry reply for the paper). Restaurant owners and chefs have gotten upset when I didn’t like their food, and customers get upset when my recommendations lead them astray. Just the other day, I got a message from someone calling themselves “WetStickyLove,” telling me that one of our Top 100 Restaurants is actually “mall chain level.”

But the biggest theme of five years’ worth of hate mail is something that surprised me. The most common message isn’t that I’m an asshole, or have no taste, or don’t know a haddock from a hole in the ground. The most common complaint is that I cover restaurants in Dallas’ suburbs.

If you live outside city limits, you might want to skip this next bit, but the complaints are real. After our last Top 100 came out, a reader circled Carrollton, Plano, Frisco, Allen and McKinney on a map and wrote, “Not Dallas! Too far to drive.” Recently, I posted a sushi photo on Instagram and someone commented with the single word, “Plano.” Other readers express their own complaints, like that the suburbs are too boring, white, bland, conservative, chain-restaurant-filled or unimaginative.

They have a point, of course. But the area outside Dallas city limits isn’t a homogenized blur of flavor-averse chain food. Without the suburbs, our city would be a less interesting, less diverse place to eat. And lower costs of operating may make areas far from downtown more appealing to young chefs, startup businesses and budding entrepreneurs.

Let’s get the detractors’ good point out of the way first so that I don’t sound like a total suburban fanboy. I was raised in generic, nondescript outer fringes of big cities, and never liked them. I live in Oak Cliff now. Dallas’ own suburbs have their special reputation. In the wake of the Jan. 6 attack on the Capitol, around 20 Texas suburbanites have been arrested for participation. Jenna Ryan, who flew a private plane to the attack, became notorious. 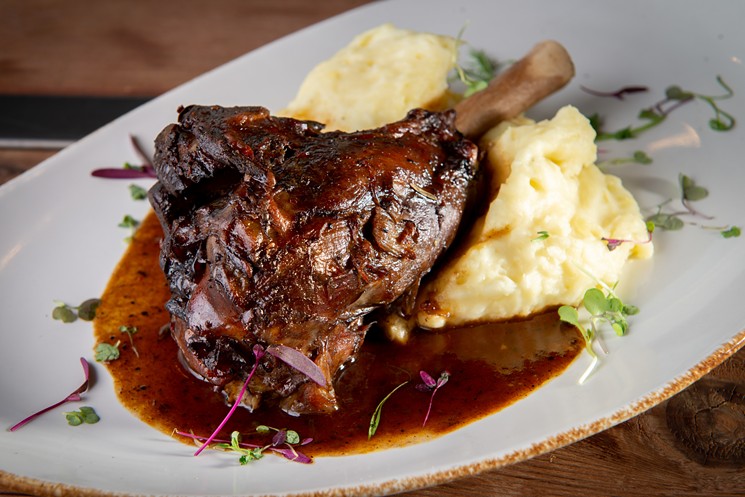 Jerk roasted lamb shank at Pangea in Garland.
Alison McLean
But the suburbs aren’t all whitewashed. They’re home to many communities of people who can’t afford high rents near central Dallas, recently arrived in the United States or work for international companies like Toyota. This is hopefully a no-brainer for most of you, but even those who know that, say, Plano is the place for great Chinese food may be surprised by the true extent of our burbs’ diversity.

Take the Top 100 Restaurants list. By my tally, the Top 100 includes 19 restaurant locations north of the President George Bush Tollway, counting separately multiple locations of local mini-chains. Of those 19, just two are owned by white Americans: the two locations of Hutchins Barbeque.

When we think of the megachurching, riot-inciting suburban residents of Whitopia, we’re often thinking of specific areas. Frisco may be two-thirds white, but many of the other towns outside of Dallas aren’t. Garland is just 27% non-Hispanic white according to a 2018 estimate, and Mesquite is right behind at 29%. Farmers Branch will soon become majority-Hispanic. Between the 2000 and 2010 censuses, Irving’s non-white population rose from 36% to 47%.

But we’ve also seen minority chefs head to the suburbs for lower rents, bigger spaces and more receptive audiences. When I interviewed Kevin Ashade about his Garland spot, Pangea, he told me that Garland had been welcoming of his high-end ambitions.

“There’s nothing like it around here,” he said. “A lot of people are tired of driving downtown, downtown traffic — it kind of gives you the New York or Chicago vibe, but it’s up in the suburbs. People up in the suburbs, they love places like this, but they don’t want to drive downtown. I’m in it for the long haul.”

There’s just no good reason to leave people like Ashade out of our food coverage. The towns outside Dallas city limits are a source of culinary vibrancy, experimentation and cultural collision. They’re places where hundreds of immigrants and working-class cooks are starting new businesses.

If we want Dallas proper to be more like that, we should work on the political and economic changes needed to make that happen by making housing easier to find, small businesses easier to start and segregation less deeply entrenched. City Council elections are happening now; research the candidates and vote.

In the meantime, if you don’t want to drive out to Allen for the best Thai food, we won’t make you. But we will make you feel like you’re missing out.