Last week, a years-old video emerged that appears to show a Callisburg ISD student dressed in a hooded mask resembling a Ku Klux Klan outfit. In it, he holds a cross and sports a DIY white hood and struts across the classroom as his peers — and a teacher — look on. Miley Cyrus’ “Party in the USA” blares in the background.

North Texas anti-racism activist and community advocate Jessica Luther Rummel posted the video to social media. Shortly after, she published a damning follow-up: a photo of a former Callisburg volleyball coach in blackface.

“This is a culture of racism that is long outdated, and this kind of behavior has obviously been normalized,” Luther Rummel said. “One can tell that based on the comments of those defending it.”
Located about 80 miles north of Dallas, Callisburg is a small town in Cooke County. The nearby town of Gainesville has also come under fire in recent months because of a towering Confederate statue on its courthouse lawn. Last month, a Cooke County GOP precinct chair and his wife were arrested for their alleged participation in the Jan. 6 Capitol insurrection.

While many expressed outrage at the Callisburg ISD video, taken during the 2017-18 school year, Superintendent Donald Metzler said it had “nothing to do with the KKK.” Rather, the student was dressed as a character from the horror videogame and film franchise Silent Hill, Metzler said, although he's uncertain what would have motivated such a class activity.

In the Silent Hill films, a shirtless, muscular character named Pyramid Head wears a dark pyramid-shaped helmet. He also brandishes a sword-like weapon, which Metzler said the student had attempted to recreate but failed to properly execute, ending up with something that looks very crosslike.

Meanwhile, the blackface incident occurred during the 2016-17 school year, and the coach, Kristin Williams, is no longer employed with the district, Metzler said.

"We’re not going to allow children to be held hostage to a century ago anymore.” – Jessica Luther Rummel, activist

The photo shows Williams in blackface, an afro wig and red shirt with a white collar. Williams had dressed as Fat Albert during a pep rally skit in which people posed as cartoon characters, Metzler said.

“I don’t know if you’ve ever been to a pep rally in a high school during football season in Texas, that’s when a lot of silly antics and games and stuff occur,” he said.
Williams did not return the Observer’s request for comment.

Both teachers have since left Callisburg ISD, and Metzler said he’s unaware of any punishment handed out at the time of the incidents. Moving forward, though, the district will place greater emphasis on diversity training, he said.

“All I can do is try to make everyone employed with this district aware that we’re in a very closely watched society today,” he said. “Things that you might have said and done 15 years ago are just not appropriate anymore, and you have to get in line with that, try to accept it and move on.”

This isn’t the only North Texas district that’s been accused of racism in recent months.

This is a cosplayer dressed up as Pyramid Head from Silent Hill, with friends.
Johnson Wen, CC BY-SA 2.0, via Wikimedia Commons
click to enlarge 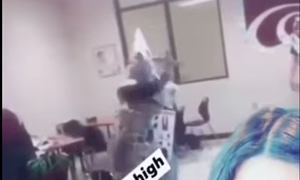 This is the kid from the Callisburg ISD video. Try not to confuse him with Pyramid Head. It shouldn't be difficult.
Screen capture
In April, screenshots emerged of white Aledo ISD students pretending to sell their Black peers during a virtual “slave auction.” Community tensions reached a boiling point later that month after flyers advertising a “slave sale” were left around school campuses, according to FOX 4 News.

Days after the Aledo incidents, CBS DFW reported the resignation of a Greenville ISD teacher who photographed her foot on the neck of a Black elementary student. The teacher took the photo on the same day that former Minneapolis police officer Derek Chauvin was found guilty of George Floyd’s murder. Floyd died after Chauvin put his knee on the man's neck.

Last year, photos emerged of a Midlothian ISD board of trustees member and another white woman dressed in blackface, apparently as tennis stars Serena and Venus Williams.

Incidents like these indicate a culture of racism that’s been normalized, Luther Rummel said, adding she's calling on the Texas Education Agency to launch an investigation into Callisburg ISD. The only way to change that culture is by putting a spotlight on it from the outside.

“This is about denormalizing this kind of behavior and saying it doesn’t matter that you’re tucked away in the North Texas backwoods anymore,” Luther Rummel said. “We’re going to root you out, we’re going to find you, we’re going to expose you. And we’re not going to allow children to be held hostage to a century ago anymore.”