Daniel Rodrigue
Co-owner Andy Cunningham standing next to the window of the ticket booth at The Gold Room.
When Denton's Freaks and Geeks, a toys and collectibles shop, closed its storefront, the duo behind one of the college town's favorite coffee shops, Golden Boy Coffee Co., took over the recently vacated shop next door. Now, the pair has transformed the space into an extension of the coffee shop — by day, that is. By night, the spot will be one of the largest indoor music venues in Denton’s recent history, with a 300-person capacity, an enclosed, dedicated sound booth, a cashier’s window for ticketing and four gender-neutral bathrooms.

The Gold Room isn’t exactly a secret, but the owners are not advertising the opening either as the new venue hosts its first concert Friday, May 28.
click to enlarge 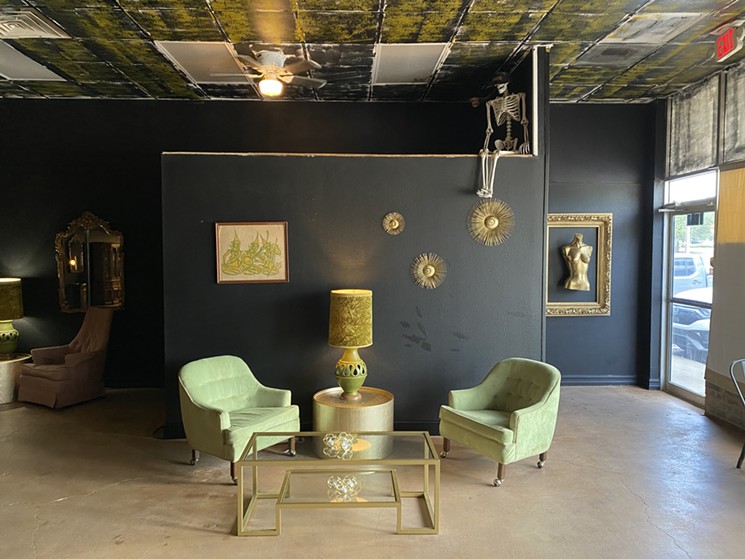 The Gold Room in Denton is soon to become one of the largest indoor music venues in Denton’s recent history.
Daniel Rodrigue

“We’re 5,800-square-feet all said and done, including the coffee shop,” Andy Cunningham, Golden Boy's co-owner, says sitting in the new office space inside the Gold Room. “What should be one of the biggest indoor music venues in town.”

From the curbside, the Gold Room looks a bit like a vacant strip-shopping storefront with a Golden Boy logo in the window as the only tip-off to what’s now in the space, which allows for more seating for regulars sipping coffee, working or studying in the already popular hangout.

The space is deep and wide with high ceilings, bringing to mind Hailey’s Club, with the addition of reserved tables for certain shows and events. The Gold Room keeps the theme from Golden Boy next door with black walls and yellow and gold accents, large gold-framed mirrors and more glitter-filled gold Lava Lamps.

“We're going to do karaoke a couple of nights a week, and it's also a rentable venue, so you can do, you know, you can rent it out and do pretty much anything you want — no, cockfights,” Cunningham says. “You know, nothing illegal.”

Co-owners Cunningham and Trey Suire opened Golden Boy in March 2019 with an espresso machine named Dorothy, after the Golden Girls character, then opened sister shops in Coppell last July and this February at The Boardwalk in Granite Park in Plano.

“We always had really good turnout for all of our shows,” Cunningham says of the pre-pandemic concerts and events, “a broad spectrum” of events from burlesque and drag shows to punk rock and hip-hop nights. Now they plan to pick up where things left off.

“Initially, when we started the shop, I never really thought that we had the space to do shows, and people just kept begging and begging and begging,” Cunningham says. “And finally we're like, all right, we'll see what happens. And it actually started doing really well for us. So, when the opportunity came up to do this, we said, you know, fuck it, man. Like, let's go, let's do this.”

Working with their landlord after Freaks and Geeks left in May 2020, Cunningham says, they took over the space to begin the build-out last August.

Before the expansion, Joey Liechty, aka DJ Yeaddef, who won Best DJ in 2009’s Dallas Observer Music Awards, was one of the first to break in Golden Boy with a '90s night in July 2019.

“I think Golden Boy is an important space for Denton not only because it is a hub for everyone, but because of Andy and Trey’s plans for the future,” Liechty says. “The club is just a piece of that. I met with Andy at the new space during the build-out. I was glad to hear that they are making dancing a primary feature of the space, unlike the Denton trend of patio after patio after patio. Patios are great, but we are sorely lacking a dark, loud space for body language”

“As for potential, I think it is poised to be a post COVID springboard to return us to social congregating,” Liechty says. His July 3 event at The Gold Room will be “an old-fashioned '90s night blowout.”

For bands, artists and others looking to book the venue, Cunningham suggests reaching out in person or messaging thegoldroomdenton on Instagram, as he’s handling the booking for now.

“I'm booking, which I did a little bit next door,” Cunningham says. “But we're talking to a couple of folks right now about potentially taking that job on.

“Honestly, I wanted to, I live three minutes from here,” Cunningham says. “And I wanted to build a business where I just don't ever have to leave, you know. Live music, alcohol, coffee, and then we're putting the tattoo shop in the back there, in the back alley.”

“We haven't announced anything just like when we opened up Golden Boy,” Cunningham says. “We wanted to do the mystique like, ‘Oh, you haven't been to Golden Boy?’ ‘Oh, you haven't, heard of The Gold Room?’ So we've spent zero dollars advertising Golden Boy. And I plan on doing the same here. Both to look cool. And because I'm poor.”
click to enlarge 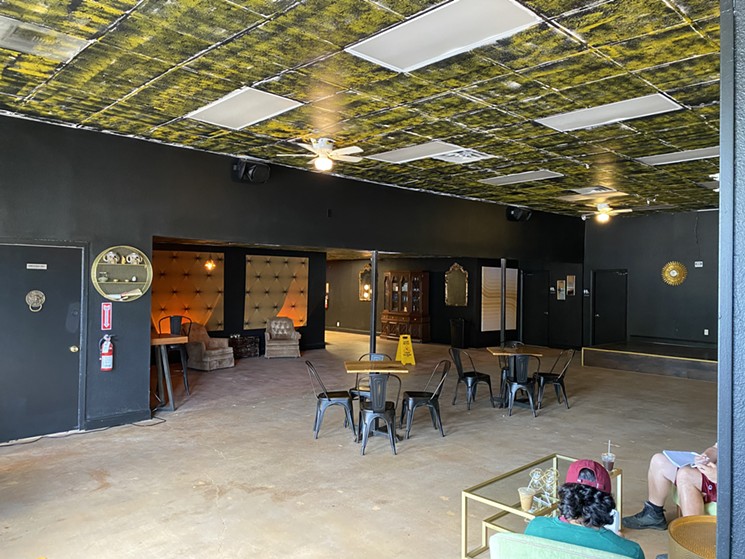 The new venue has a 300-person capacity.
Daniel Rodrigue