Sean Welch
The brisket huevos rancheros at Hurtado's
How often do you think about a weekend brunch destination and consider a local barbecue joint? Better yet, how often do you consider barbecue but whoever you’re with doesn’t have the same craving? Arlington might be the place for you.

Brandon Hurtado smokes more than 4,000 pounds of brisket, turkey, quail and all the other usual suspects each week at his eponymous barbecue joint. As if that wasn’t a difficult enough task, he’s now offering one of the most sought-after weekend meals — brunch.

We visited Hurtado’s recently to sample the growing menu, specifically the brisket huevos rancheros, which they recently teased on social media. With the line wrapped around the neighboring building, we set up shop and settled in for the wait. Through the whispers and chatters, you could surmise that everyone was there for the barbecue, but there wasn’t much mention of brunch. That’s all about to change.

On this brilliantly sunny day, the light hit the plate just right for some photos before we tore into this feast. Between bites, we wondered what inspired Hurtado to expand his offerings. Turns out it was born of personal preference. “Brunch is my favorite meal of the day, especially when I want breakfast after 10 a.m," he said.

The huevos rancheros made a lasting impression. Chopped brisket drips with runny yolk from perfectly fried eggs that contrast with freshly fried tostadas, all of which make for quite the wedding on the taste buds.

Hurtado has been getting a lot of practice perfecting his brunch menu at home. 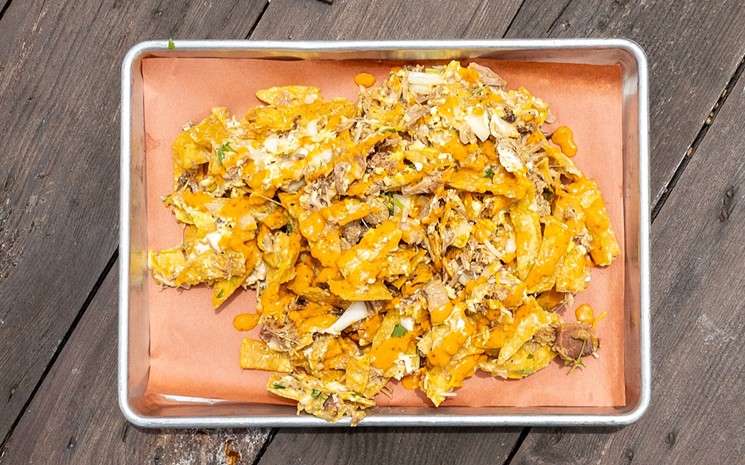 Hurtado's brunch migas, served Friday through Sunday, are made with house-fried tortilla strips and topped with Savage Sauce.
Sean Welch
“I literally make migas for my wife at least two to three times a week at home. We eat it regularly because it’s simple and delicious. The huevos rancheros I’ve also done quite often at home because it’s a quick and easy fix if you’re hungry and want something spicy or savory,” he says.

Hurtado says they fry the tortilla strips in-house, ensuring they stay fresh and crispy. “The Savage Sauce made by Russell Savage adds another layer to the dish with its spiciness and acidity,” Hurtado says.

They've sampled a few different specials over the weekends recently, including a Texas-style brisket Benedict and pork belly creme brûlée. A full menu every weekend is quite ambitious so they plan to keep the huevos rancheros and migas as permanent brunch items while rotating other specials.

The missing piece of the puzzle is a refreshing brunch cocktail. Sure, there’s plenty of beer options, but nothing beats a mimosa or michelada with brunch. Hurtado plans to open a bar, Hayter’s, in mid-summer 2021. The name pays homage to reverend Andrew Hayter, who is often considered the founder of Arlington. The plan is to have an indoor/outdoor bar accessible from Hurtado’s patio for that thirst-quenching brunch cocktail.