In Grilled Cheese Lobster Sandwich News, The Dock Has Opened in The Exchange

Lauren Drewes Daniels
The grilled cheese lobster sandwich at The Dock is what the locals eat.
The AT&T Discovery District in downtown continues to impress in terms of entertainment and food. Last week a trailer for a new Angelina Jolie movie played on the outdoor building-sized media wall. With surround sound speakers dotting the perimeter of the outdoor square, it’s a “Wow, what an amazing time to be alive,” experience. This includes the fact that we’re all able to mingle once again in a public space after a pandemic and subsequent vaccine.

Recently we reported that Bobbers and Whips opened inside The Exchange, a large food hall on one side of the entertainment district. Their Rebel burger oozing a warm creamy pimento cheese was hard to forget. On a return visit last week, we found a new spot, The Dock, had opened with a whiff of seafood drifting over their counter flirting with passersby.

The Dock’s owner, Brett Curtis, was working in the kitchen and said this concept was initially a food truck; then he opened a restaurant on McKinney Avenue and another smaller location inside Legacy Hall in Plano. 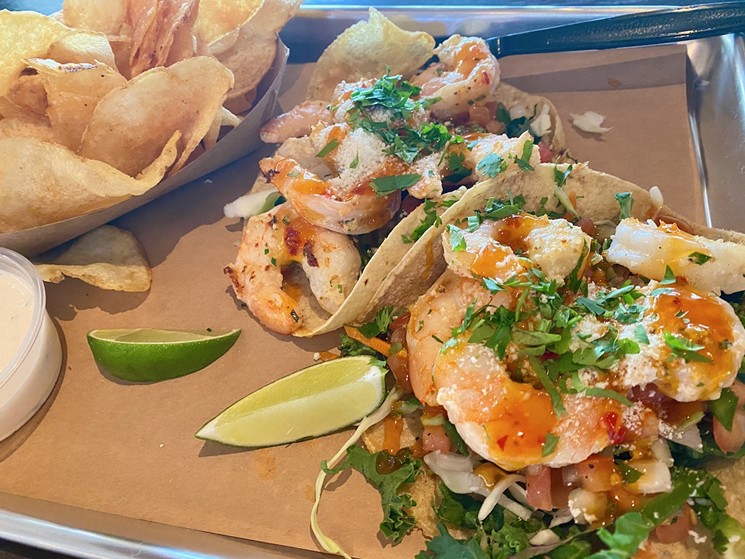 The shrimp tacos at The Dock inside The Exchange
Lauren Drewes Daniels
“I brought the all-stars here,” Curtis says, referring to the menu. With the small space (think food court) the menu is tight. Hot crab queso leads off as an appetizer, then they have four types of lobster rolls, fish or shrimp tacos and two soups (New England clam chowder and lobster bisque), along with a few sides.

Curtis says the McKinney Avenue restaurant serves as a commissary of sorts; some things, like the house-made chips, are sliced and fried there and delivered to this post.

The price of one shrimp taco ($5.50) might cause one to consider ordering something else but stay fast. The cashier assured it’s a substantial amount of food and he was right. There were five or six medium-sized crustaceans atop a mound of slaw, pico, cilantro, a bit of cheese and a house sauce. One taco is a light meal; two is almost too much. The tortilla is light, acting as an extra, modest not to get in the way of the main star.

The main star is perfectly cooked shrimp. A foodie at Central Market once shared a visual tip for cooking shrimp: “Cs not Os.” Shrimp shouldn’t be cooked so much that they’re reduced to a rubbery vowel, ruining their delicate texture. Knowing the difference between undercooked and Cs requires a watchful eye. Here they nail it.

But the real show stopper here is the grilled cheese lobster sandwich, which is every ounce of naughty and indulgent as the name implies, a sexy cabaret-type number. Sriracha, lobster meat, crab queso and Gouda melt together between buttery sourdough bread. Dollops of The Dock’s house-made mango habanero hot sauce is a punchy addition. This sandwich falls under the "Locals" section on the menu.

Don’t flinch at the crab queso atop the lobster. As much as we all love queso, we could probably agree it would be criminal to blanket lobster with it. That's not the case here. It too plays the role of a background extra. The sandwich came with an order of their house-made chips with crab seasoning, which are much better than chips should be.

Bowls of chowder and bisque look equally as tempting.

The Exchange is having an official grand opening on June 25. All of the tenants, which include La Duni, Revolver Taco and Monkey King Noodle Co. should be open by then. And there appears to be an Amazon-type set of lockers for to-go meals; order online from any of the restaurants there, arrive, scan a code and grab your meal. What a time to be alive.