On the Run: Wanted for Charlottesville Violence, Texas Neo-Nazi Nowhere to be Found

Evan Nesterak, CC BY 2.0, via Wikimedia Commons
On Aug. 12, 2017, white nationalists swarmed Charlottesville and participated in the 'Unite the Right' rally
He’d made a long trip from Texas, but neo-Nazi podcaster Robert Warren Ray arrived in Charlottesville, Virginia, ready for blood. He wore a thick, unruly beard, glasses and a ball cap with a Texas flag. He delivered speeches. He threw punches. He unloaded pepper spray on counter-protesters.

It was Aug. 12, 2017, and Ray was among the white nationalists, neo-Nazis and other far-rightists who had traveled to Virginia to rally against Charlottesville’s decision to remove a statue of Confederate Gen. Robert E. Lee. Dubbed "Unite the Right," it was the largest white nationalist protest in years.

The night before the protest, far-right marchers swarmed the University of Virginia, carried Tiki torches, attacked counter-protesters and chanted, "Jews will not replace us."
click to enlarge 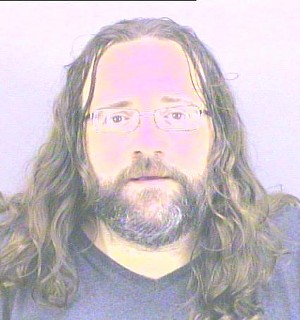 
The next day, they again attacked counter-protesters, anti-fascists and community members around the city. By the time it was all said and done, a neo-Nazi had rammed his car into an anti-racist march, killing 32-year-old Heather Heyer and injuring dozens.

In the lead-up to the protest, Ray had done his best to rile up his audience at the Daily Stormer, the neo-Nazi podcast where he wrote and hosted a podcast known as "The Krypto Report." The website was one of the most influential neo-Nazi blogs online, and Ray stood out as one of its loudest voices.

Once on the ground in Charlottesville, he complained to a Vice reporter that the city was “run by Jewish communists and criminal n*****s.”

Later, he described himself as the Daily Stormer’s “man on the ground at events” and celebrated that white nationalists “greatly outnumbered the anti-white, anti-American filth,” referring to counter-protesters. “That which is degenerate in white countries will be removed,” he added.

Backlash came swiftly. Lawsuits tied up the rally’s organizers, authorities charged some participants, and the resurgent far-right, which had clung to the coat tails of former President Donald Trump, found itself facing widespread opposition around the country. Protests had their permits pulled, events were nixed and speeches got dropped.

When far-right demonstrations did crop up, anti-fascists and other counter-protesters fought them in the streets. Meanwhile, federal authorities have clamped down on neo-Nazi groups accused of plotting violence, including some in North Texas.

Nearly four years after Unite the Right, Ray is nowhere to be found. Known among neo-Nazis as “Azzmador,” the 54-year-old East Texan has been running from the law for years.

Last September, a federal judge issued a bench warrant for Ray’s arrest. U.S. District Judge Norman Moon said Ray was in “total contempt” of court orders in a lawsuit against him and other Unite the Right participants and organizers. At the time, Ray had failed to appear for three video depositions.

But Ray had already been on the lam for a while. In June 2018, a warrant for his arrest was issued on a felony charge for his alleged use of pepper spray on counter-demonstrators during the march the night before Unite the Right.

Contacted by the Observer, a clerk at the Albemarle County Circuit Court said the felony warrant was still outstanding and that Ray could, in theory, be extradited to Virginia if law enforcement anywhere in the country ran across him.

On Friday, a spokesperson for the U.S. Marshals Service said the agency had picked up that warrant. The spokesperson explained that the felony warrant for the pepper spray-related charge "does provide full extradition authority, so we hope to locate Mr. Ray and return him to Virginia in the near future."

Susan Corke, who oversees the Southern Poverty Law Center's (SPLC) Intelligence Project, said Ray "was central in planning violence at the deadly Unite the Right rally in Charlottesville in 2017."

"There must be serious consequences for his central role in this racist violence. He can’t run like a coward forever." - Susan Corke, Southern Poverty Law Center

"The court found Ray in contempt for flouting countless court orders and failing to appear for a number of depositions," Corke added. "There must be serious consequences for his central role in this racist violence. He can’t run like a coward forever."

Ray’s problems with the law started long before he rose to white nationalist fame. Born in December 1966, he has lived in Tyler, Frankston and Irving, among other Texas cities, over the years, according to public records.

Since the early 1990s, he's racked up a laundry list of felony and misdemeanor charges across the state: weapons charges, drunk driving, disorderly conduct, drug possession, theft, assault and evading arrest, among others.

More recently, he's amassed deep credentials in the white nationalist movement. He also hosted the Daily Stormer’s Dallas-Fort Worth book club. (“Think boots, not books,” he once said of the meet-ups, according to court documents.)

His reach within the white nationalist movement runs deep. On top of his output at the Daily Stormer, Ray forged links with hate groups around Texas and beyond.

“We don’t know where Ray is, but he has been heavily involved in white supremacist activism in Texas for years, including with groups we track like Patriot Front,” said Michael Edison Hayden, a spokesperson and senior investigative reporter at the SPLC.

Patriot Front is a Texas-based white nationalist group that regularly posts anti-immigrant and racist propaganda such as stickers and flyers in cities around the country, including in the Dallas-Fort Worth area.

Even as the lawsuits cropped up and many Unite the Right participants disappeared, Ray remained publicly active for a while. A month after the deadly Virginia rally, he led a mob of masked white nationalists, including Patriot Front members, as they attempted to storm the Houston Anarchist Book Fair.

But the anarchists inside the building battened down the hatches and blocked their entry. Stuck outside, the neo-Nazis chanted and lit flares, the Houston Press reported. “This was an unpleasant and frankly terrifying event, but we didn't let it interfere with the book fair,” Kit O'Connell, who was inside the book fair, said at the time.

In an article published after the incident, the Daily Stormer claimed the "communist f****ts … just locked the doors and cowered in fear."

Since going on the lam, Ray has continued his online activities with some infrequency, popping up on the live-streaming platform Trovo, now and then posting new episodes of his podcast and hosting occasional call-in shows on his Telegram channel.

"Our team is committed to holding the defendants accountable, no matter how they try to escape accountability." - Amy Spitalnick, Integrity First for America

In hiding or not, he will still have to face the consequences of the civil lawsuit filed by Integrity First for America, a nonprofit group representing plaintiffs suing Unite the Right organizers over the Charlottesville violence.

"Our team is committed to holding the defendants accountable, no matter how they try to escape accountability," said Amy Spitalnick, the nonprofit's executive director. "We’ve already won significant financial and evidentiary sanctions, as well as jail time, against a number of defendants."

The lawsuit has already financially crippled many of the defendants, Spitalnick said. "This lawsuit is about accountability for the violence in Charlottesville — and sending a clear message of the serious consequences for this sort of hate."

Ray's not alone in trying to outrun the law. Elliot Kline, another Charlottesville organizer, used to head Identity Evropa, a now-defunct white nationalist group. He refused to provide electronic devices and passwords requested by the court, leading the judge to find him in contempt and jailing him.

"The Unite the Right violence wasn’t an accident or a clash between sides," Spitalnick explained. "It was a meticulously planned, violent conspiracy to attack people based on their race, religion and willingness to defend the rights of others — down to online discussions of hitting protesters with cars."

Editor's note: After publication, this story was updated with new information from the U.S. Marshals Service.