Kathy Tran
Andrea Meyer planned to be a professor but fell in love with food.
Being fully transparent, we're quite smitten with the angelic-like pastries from chef Andrea Meyer at Bisous Bisous. Over the years, we've swooned over their layers of butter, flour, sugar and salt. As well, we've documented the delicious journeys and complicated struggles the small pastry shop in Uptown has been through.

In a 2019 piece titled "The Hardest-Working Baker in Dallas," the chef talked to Taylor Adams about her battle with chondrosarcoma, a rare bone cancer. She had seven surgeries that sidelined her for most of 2020. This was in addition to the pandemic and staffing challenges. Just a few weeks ago, the baker posted a heartfelt thank you to the city that, through it all, has kept her pastry shop alive and kicking.

Once again, Bisous Bisous has another hurdle. A new restaurant has moved in less than two miles from their shop with the same name, minus one kiss: Bisou.

As much as I’d like to focus on our pastries, our customers and our staff, the reality is that our hard earned reputation and brand is valuable and has to be defended. While we’d asked this company to recognize our legal rights months ago, they disregarded it and we now find ourselves in what will decidedly be an expensive litigation.


Bisou is a club-centric social dining spot that opened July 7 and, unfortunately, is already racking up negative reviews. And herein lies Meyer's true 21st-century problem: Customers are mistakenly leaving one-star reviews for her bakery instead of the restaurant.

For instance, Margaret Rymer wrote on Google, "Management is completely unprofessional and terrible to employees. The food actually tastes like it was chewed by a homeless man, will never go back."

A similar review complained they "wanted to like this place so badly. However, I ordered a croissant and asked for jam. Instead, they served me pulverised cockroaches and said it was artisanal honey. won't be back!"

Jocely Gaspar wrote, "The food taste like something i could eat out of a mcdonald's trash can." 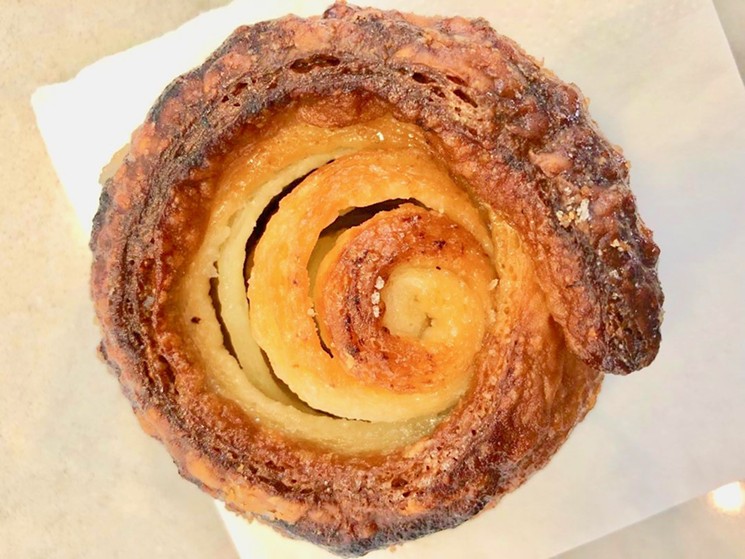 A kouign-amann is a complicated yet life-changing pastry that chef Meyer discovered while vacationing in Brittany, France. She flew back to France years later to learn how to bake it, then spent years perfecting it before adding it to her shelves in Uptown.
Lauren Drewes Daniels
In just three days, Bisous Bisous received 32 one-star reviews on Google. The bigger question is what is going on at Bisou that has so many people penning rancid reviews since the place opened just four days ago? The situation is similar on Yelp, but these seemingly far-fetched reviews (roaches crawling over the bathroom walls) are from New York and Indiana. Someone is clearly out to get Bisou, and Bisous Bisous has gotten caught in the crosshairs.

In a virtual counterattack, Meyer's regular customers are trying to dilute those one-star reviews with a fresh spate of five-star reviews.

In the meantime, Bisous Bisous has launched a GoFundMe campaign to raise $150,000 for the legal fees needed to file a trademark infringement suit. In the post, Meyer explains they did seek legal counsel and were advised they had a case, so they sent the owners of Bisou a cease and desist letter prior to opening. Meyer says Bisou told her they had no intention of making changes and that if she wanted to sue them, she should proceed.

Bisou is managed by Cle Group Property and has a flagship restaurant in Houston. You can see from their recent Instagram post below it is not a tiny French bakery with a counter of croissants and a case of macarons.

We reached out to Bisou and will update this article if we hear back.