The hairstyles ranged from naturally curly, coily, to shaved or straight, locs, braids and, of course, buns. The event was spawned by WFAA's traffic reporter Tashara Parker, who went viral last year for wearing her hair in a quadruple bun hairstyle on television while doing the weather. After receiving negative criticism, Parker decided to push back in a big way.

"I call it 'Bun Ministry' because this is an effort to educate people about our hair," Parker says. "Yeah, it started out as a hairstyle I wore on-air, but it evolved into a conversation that's surrounding Black hair, Black hair discrimination, micro-aggressions that Black women face in the workplace. We're really just trying to amplify that conversation."

Women from all over Dallas as well as some who'd traveled from Houston, New York and California, came together to talk about and get comfortable with their hair. As participants walked into the venue, they were greeted by live music, mimosas and goodie bags filled with hair care products. Parker floated around the venue, talking and taking pictures with attendees, creating a safe space for real talk about the often-sensitive subject of hair.

The topic was amplified during two separate panel discussions. The first was about hair discrimination, and the second about hair care.

The term "safe space" may seem overused, but once the panelist spoke about how women have been treated, spoken to, or been forced to assimilate to mainstream ideas of beauty in their professional lives, it became clear why meetings as these are needed and dubbed safe. Hair hostility is such an issue for some women that they're hesitant to wear their hair naturally, something many of them expressed to Parker before the event.

"I had some people that were questioning whether or not they could wear their hair straight," Parker says. "I was like, 'Are you kidding me? Yes, you can wear your hair however you chose to wear your hair.' That's the beauty of us."

State Rep. Rhetta Andrews Bowers was one of the panelists and talked about her work trying to pass the Crown Act in Texas, which would make it illegal to discriminate against employees based on their hair, hairstyle and hair texture, an issue many women of color deal with in the workforce.

Hair criticism at work is also something that two other panelists, Cleo Greene, Parker's WFAA colleague, and NBC 5's Candace Sweat, know about all too well. Both reporters said they'd been told by their news directors to ditch their hairdos to ascend in the industry. When she was starting out, Sweat wore her hair in a tiny afro and recalled being told by her boss that she should consider a change.

"[The news director] took an opportunity to critique my hair," Sweat said in the panel. "He asked me, 'Have you ever considered changing your hair?' It totally caught me off guard. It changed the course of how I presented myself for many, many years." 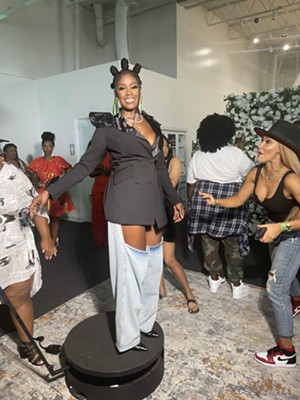 Tashara Parker took women to church about natural hair after being criticized for her on-air hairdos.
Paige Stewart
Greene had a similar experience working her first job in the Virgin Islands. She thought that by working on an island, she would be free to wear her hair in its naturally curly state and with support from her boss. She found out differently.

"I'm going to wear my hair big and curly. I'm hello, it's hot," Greene told the crowd. "My news director brought me into her office and said, 'You know what? Men don't really like your hair like that.' I said, 'What do you mean? It looks good.' She said, 'You would look more professional with your hair straight.' Ever since, I wear my hair straight, but I see Tashara everyday and I'm embracing it."

Honest conversations such as these inspire Parker. Her hope is attendees can walk away with a new purpose.

"I hope my lovely disciples learn that we are all beautiful," she says. "Whether you wear your hair straight, wear your weave, or you wear your bantu knots or braids you two-strand twist. Whatever it is, I just hope they understand and embrace that beauty whatever that looks like to them."

Parker promises that the church of Bun Ministry will be an annual event.

Sweat hopes a future journalist will hear her story and that it gives her courage.

"Someone needs to know that I had that experience, and I made it," she says.