Louie Gohmert Takes On the Criminal Justice System, Kind Of

The victims of this oppressive system? Trump supporters like him, of course.

In a Monday tweet, Gohmert wrote, “Sadly, two systems of justice exist in America today: one for former President Trump along with those who support or don't hate him, and the other for everyone else.”

The East Texas congressman sent the tweet to announce a Tuesday press conference, which he held outside the Department of Justice in Washington alongside Florida Congressman Matt Gaetz, who's subject of an investigation over an alleged sexual relationship with an underage girl, and QAnon evangelist and Georgia lawmaker Marjorie Taylor Greene.

Gohmert demanded that President Joe Biden have the U.S. Justice Department release information regarding “reports of mistreatment” in the jails holding Trump supporters charge in the Jan. 6 assault on the U.S. Capitol.

But Gohmert and his crew didn't get a warm welcome. Protesters rolled up, shouting and blowing whistles to drown out the Republican lawmakers' comments. Gohmert spoke for about four minutes — plenty of time to stumble through a signature soundbite-worthy statement.

He got rolling by threatening the small knot of protestors in the crowd: “When you have people here who will probably be arrested here for disorderly conduct, we need to make sure that the jails are treating them properly when they’re arrested."

At the core of Gohmert’s gripe with the Justice Department, he explained, is that Attorney General Merrick Garland hasn’t responded to his and other Republicans’ requests for information about law enforcements’ investigation of the Jan. 6 insurrection.

“We have been asking for months, for meetings with the attorney general, in letters to the D.C. jail, and been refused … the D.C. jail, prison … are under the auspices of the federal prison system. And yet we’ve been denied that.”

Gohmert, who couldn't be reached for comment, is demanding that the feds explain how they’re investigating and prosecuting detainees in one of the largest law enforcement operations in American history. He wants himself and his Republican colleagues to be empowered to monitor the federal holding facility in D.C.

In other words, he wants unprecedented access to a federal criminal investigation and to oversee the jailers minding the suspects charged in a political case in which his party has a stake. His justification?  “There are reports of people being held, and demands for admissions of guilt, and yet they have not been shown the evidence against them, they have not been shown the exonerating, exculpatory evidence against them as required by law.”

No one has made public any evidence proving anyone was forced to plead guilty against their will, or proof of constitutional violations.

He wrapped up by implying, with vintage Gohmert eloquence, that the Biden administration is incarcerating people for their political persuasions — not for participating in a violent attack on the U.S. Capitol in which they beat police officers, vandalized the nation's Capitol, stole from the offices of Congress and resorted to violence and rioting in an attempt halt the constitutionally mandated certification of a presidential election because their guy lost. And they video-recorded themselves doing it.

“So we still need to know, do we have political prisoners here in America or not? And we can’t get an answer. And I was taught in the Army, that no answer, is an answer of no. Or an answer that, yes, what you’re concerned about is happening, so we’re not going to answer.”

The answer is either yes or no, he means.

Taking to Twitter after the event disbanded, Gohmert rounded out the day with some good ol' fashioned red-baiting: 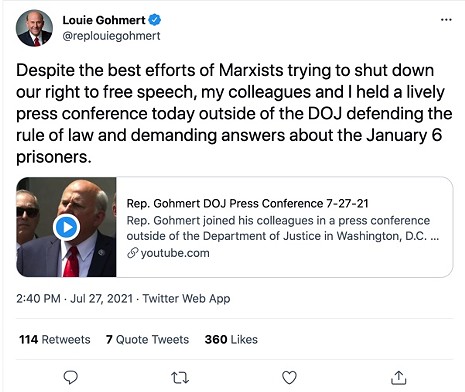 Michael Murney
It shouldn't be surprising, sure, but Louie Gohmert wants you to believe the feds, the criminal justice system and the supposed Marxists are all victimizing, well, Louie Gohmert and people like him.