Local Craft Brewing May Never Be the Same, And That's Good News

Lauren Drewes Daniels
Micheal Peticolas says the pandemic moved the needle for wider distribution rights.
We learned a lot about ourselves over the past year and a half. Life paths, career choices, how to disappoint a sourdough starter or a cross-stitch pattern. Some leaned on the importance of family while others found sanity in solitude.

Local breweries learned a lot too. Their pivots and cross-stitches required just as much work, maybe more, than our personal journeys. Before the pandemic, Dallas breweries were humming right along; craft beer drinkers turned taproom hopping into a regular weekend event, while operators honed in on niche events and activities that appealed to their crowds.

And at last in 2019, a beer-to-go law had passed, allowing Texas brewers to sell from their own porch steps. The lane was really opening up.

Then the breaks got slammed on all that. As Dallasites observed shelter-in-place orders, tasting rooms sat empty. Brewers were helpless. But simply being a craft brewer in Texas meant you innately have some grit in your bones. It’s not an easy business, from regulations to a wicked distribution system to local competition, it takes a stout upper lip to enter the game.
click to enlarge

Canning was a necessary but timely task at On Rotation in 2020.
On Rotation
Jacob Sloan and his wife started out as home brewers and, as often the story goes, that hobby soon became a life. They opened their brewery On Rotation in 2015 in East Dallas.

Lacking any type of kitchen that would qualify them for a food permit, they had to shut down when the pandemic hit. The only way they could stay in business was to package their beer. While they had plans to install a canning line at their new brewery they were working on, that space wasn’t ready yet. So, they made do with what they had, which was a small canning machine that filled one crowler at a time; a slow and painstaking yet necessary process.

Necessary because, as Sloan puts it, soon the "2020 brewery tour" came to be.

The 2020 Brewery Tour
“Craft beer consumers picked up beer and would take it home,” Sloan says of his faithful imbibers and the drive-thru events breweries hosted. “They were picking up four packs from multiple breweries for the weekend. And now we still have a pretty good amount of people who still do that.”

Fortunately for Peticolas Brewing Co. in the Design District, they had started canning as soon as the beer-to-go law went into effect, Sept. 1, 2019. Like On Rotation, they didn’t have a kitchen, so being open in any capacity wasn’t an option when the pandemic hit.

But owner Michael Peticolas points to other changes during that time that will move the needle for them in the long-term and it actually had nothing to do with beer, rather cocktails to go.

Remember when ordering a margarita to go from a restaurant — in a sealed container for that ride home — was forbidden? Seems almost silly now. Opening that door, Peticolas says, will benefit craft breweries.

Broader Access
“The big issue here is access to alcohol,” Peticolas says. “Consumers want it and are realizing that the reasons TABC or distributors provide to restrict access to alcohol are oftentimes meritless. We’d love to mail beer directly to consumers. We’d love to deliver beer directly to consumers. Unfortunately, neither practice is currently legal.”

The Biden Administration touched on this in a recent executive order promoting competition in the American economy. The Brewers Association applauded President Biden for recognizing "the need to promote a fair, open, and competitive marketplace in the sale and distribution of beer." They point out that substantial consolidation within all three tiers of the industry makes it increasingly difficult for small, independent brewers to succeed in traditional distribution channels and in big chain retail.

“Sometimes change is fast and sometimes it’s slow, but it’s always coming," Peticolas says. "Because that’s what consumers want. And our little self-distributing brewery will be ready to deliver. It’s only a matter of time. 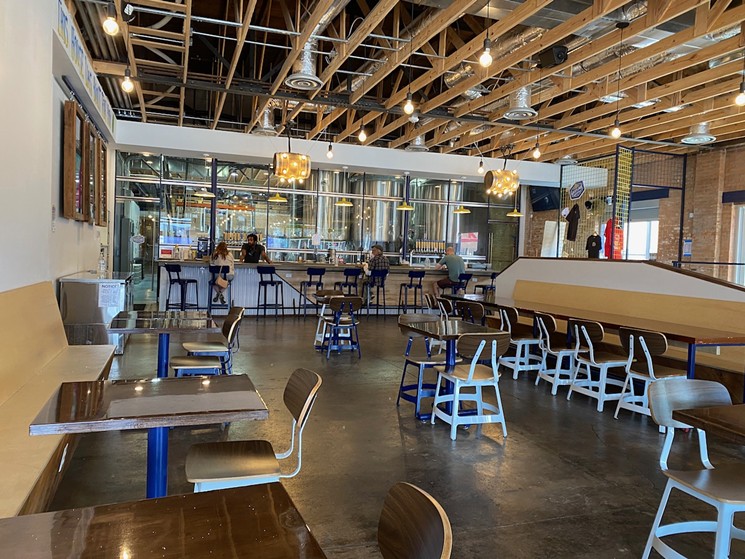 The taproom at Westlake Brewing, along with a large outdoor patio, was designed to be a community affair.
Lauren Drewes Daniels
The Need for a Gathering Space
Much like On Rotation, Westlake Beer in Deep Ellum found themselves in a precarious situation when the pandemic hit. They had just opened their spacious brewery in Deep Ellum in October 2019. Their taproom and courtyard, which were specifically designed to be a gathering space, were freshly minted but empty.

Founder Art Harvey was able to fast-track a canning system, but that missed the bigger point. He wanted people there.

In the spring, when people were getting vaccinated, Westlake started hosting trivia nights preceded by a social run. The events quickly gained traction. East Dallas and Deep Ellum residents were anxious to get out again huddled together in different parts of the brewery sipping beer and answering trivia questions. A new appreciation for being together lingered in the air.

“During the pandemic, our customers became more comfortable purchasing beer to-go, even when they had not tasted a particular beer before,” Harvey says. “Now that we are emerging from the pandemic, we've been learning how to fill an important need as a gathering space in our local community.”

Many local craft brewers, including Peticolas and On Rotation, will be at the Dallas Observer's BrewFest at Dallas Farmers Market on Sept. 11. Get your tickets here; there will be hundreds of beers to sample, food vendors and local swag galore.