Review: Roots Southern Table Is the Restaurant of the Year 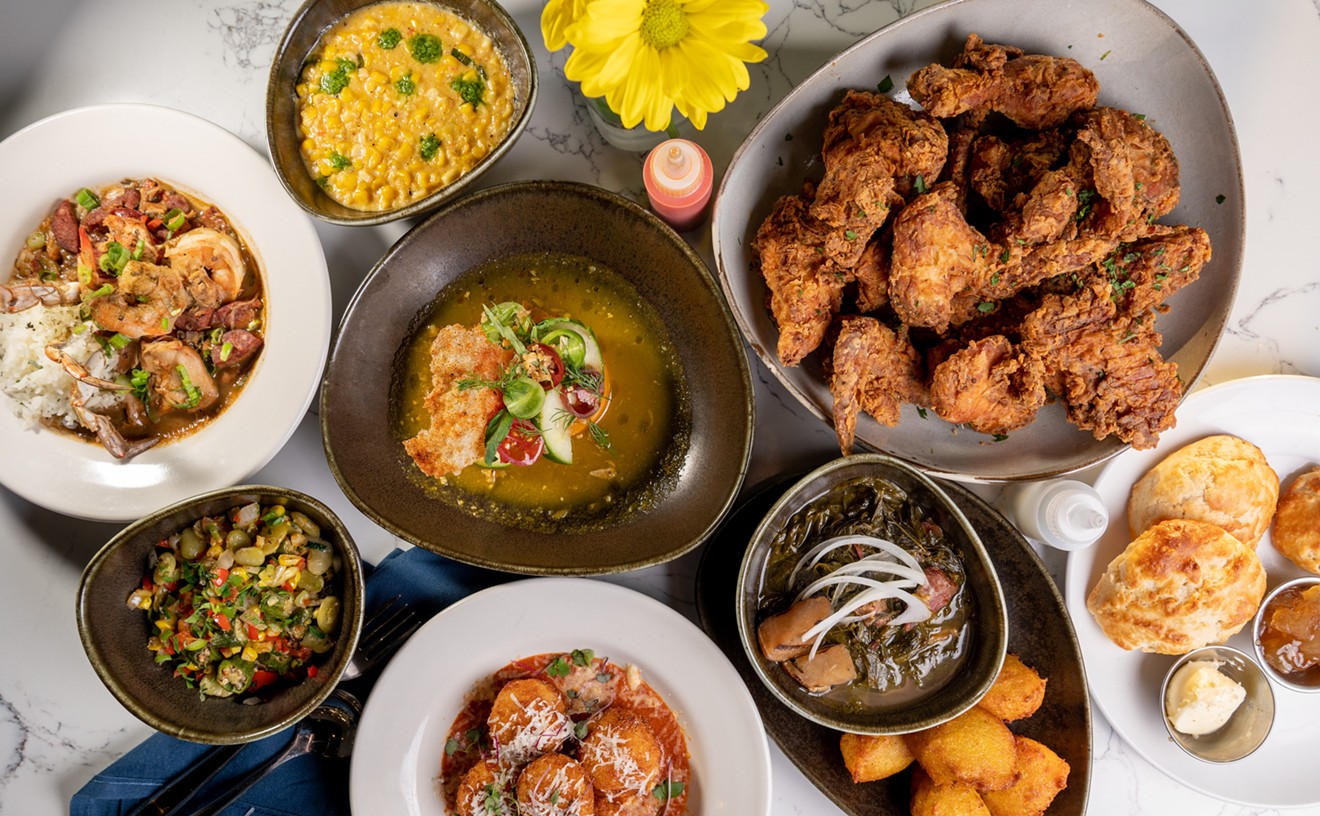 Alison McLean
Roots Southern Table was worth the wait.
The last two years have been bleak for restaurants. Just about everyone lost a bit of hope counting bills and waiting for government aid that never comes. Everyone except maybe chef Tiffany Derry.

At Roots Southern Table, her triumphant new Farmers Branch restaurant, everyone is full of joy. The customers are happy, the staff is enthusiastic, the mood is like a family reunion and the food tastes like a celebration. At Roots, it’s very easy to remember just how much we loved a great night out before the pandemic.

This is a vision of Southern food that Derry spent years preparing. It’s my favorite kind of restaurant, one where the experience isn’t serious but the food is seriously good.

One thing that makes Roots so great — one thing that makes everybody there seem so happy — is the greatness of its vegetables. Derry’s kitchen serves up the truth about Southern food, that it’s not all about pork and grease and golden oil bubbling away in a fryer. Southern food comes from the produce of the land, and the people, mostly Black, who grew it and in many cases brought it with them. 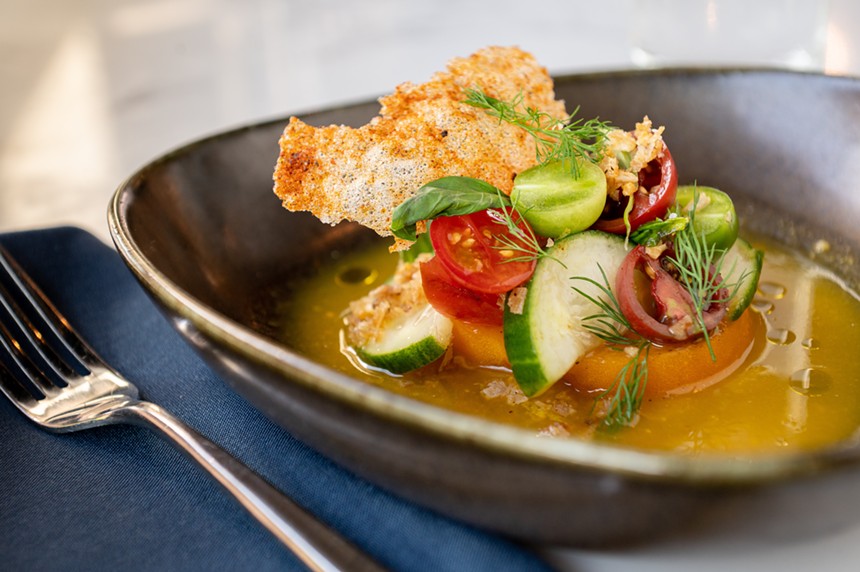 A seasonal salad in a tomato broth.
Alison McLean
Earlier this year, we loved a salad of crisp, fresh spring peas with glowing pink radishes, creamy burrata and an acidic, bright dressing with bacon crumbled so tinily that it registered more as a source of salt and crunch, like breadcrumbs, than as bacon bits. Many chefs plate a salad around burrata as if the cheese was a mighty pyramid and the veggies mere pebbles at its base, but at Roots, the vegetables were the stars. ($13)

As the seasons changed, that salad was replaced by another, this time celebrating tomatoes. Yellow, red and purple heirloom tomatoes are served in wedges and wide slices in a bowl of yellow tomato broth with a dash of yuzu citrus. They’re lovely enough by themselves, but even more so with the cucumbers, dill, ground hot peppers and big craggy shards of crispy duck skin which come on top ($13).

The menu distinguishes between “Down Home Roots” and “Modern Roots” appetizers, but the lines aren’t always so clear. There’s a plate of shrimp and grits, for example, but both ingredients are bundled up (with hot peppers and cheese) into deep-fried balls, then plated with tomato sauce so that the plate looks Italian ($12). Sounds strange, but trust me (or trust Derry): It’s fabulous.

The bowl of stewed greens is mostly traditional, with meaty potlikker, a couple of grilled turnip wedges and a bottle of vinegar on the side ($10). But the hot water cornbread served alongside isn’t a classic square; instead, it’s little fried balls, like cornbread doughnut holes. Tear them apart and use them to scoop up greens and soak up broth. 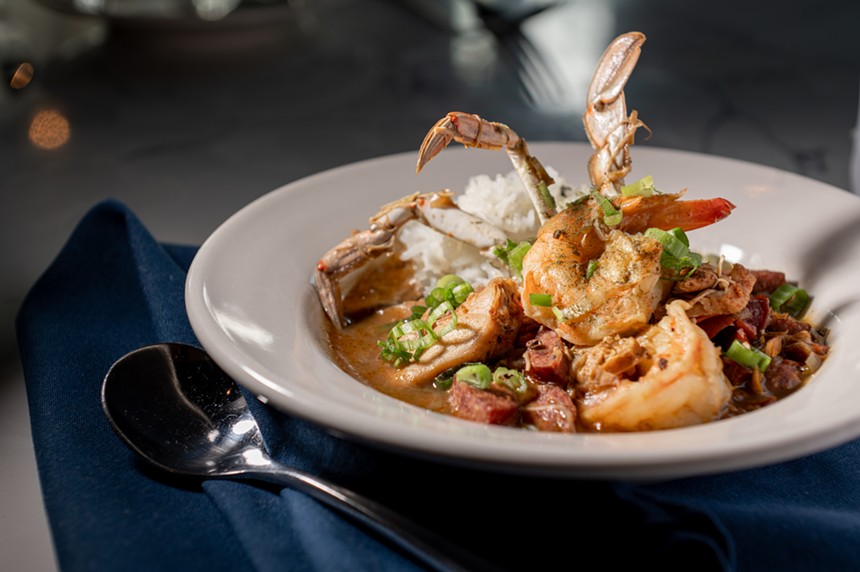 The gumbo at Roots uses a recipe passed down from chef Derry's mom.
Alison McLean
The most traditional starter might be the gumbo, and gosh, is it great ($10). Credited to Derry’s mother’s recipe and garnished with a great big piece of blue crab, it’s not a deep dark brown like some gumbos, and it’s loaded up with shrimp and Zummo’s brand andouille.

On our first visit, our mains hit the table and we realized we’d ordered a literal cornucopia. Under the grilled hen of the woods mushrooms sat a scoop of creamed corn so divine I’d buy it in big red gas cans. It’s not that creamy — it’s not soupy — so the corn shines. The mushroom was no slouch, either, served with grilled turnips and garnished with a fried basil leaf ($24).

Since that wasn’t enough corn, we also had a dish of scallops, perfectly seared and served with square-shaped corn ravioli ($34). For crunch, cornbread crumble. With a handful of greens and radishes for garnish and little dots of housemade hot sauce, it’s a lovely plate.

Oh, and there was a third kind of corn, too, because we’d foolishly asked for a side order of succotash ($8). I say foolishly, but we devoured the whole bowl of corn, charred okra, bell peppers, onions, lima beans and herbs.

Roots’ showstopper is of course family-style fried chicken. Derry’s been known for chicken for years and serves the bird at her two other restaurants, the Roots Chicken Shak food hall businesses in Plano and Austin.

All the chicken at all three locations gets fried in duck fat, and at the food halls they’ve got duck fat fries, too. Although I haven’t tried them yet, Roots Southern Table also uses duck fat to make fried potatoes ($9) and dirty rice ($8). Derry may well be one of the world’s biggest consumers of duck fat. 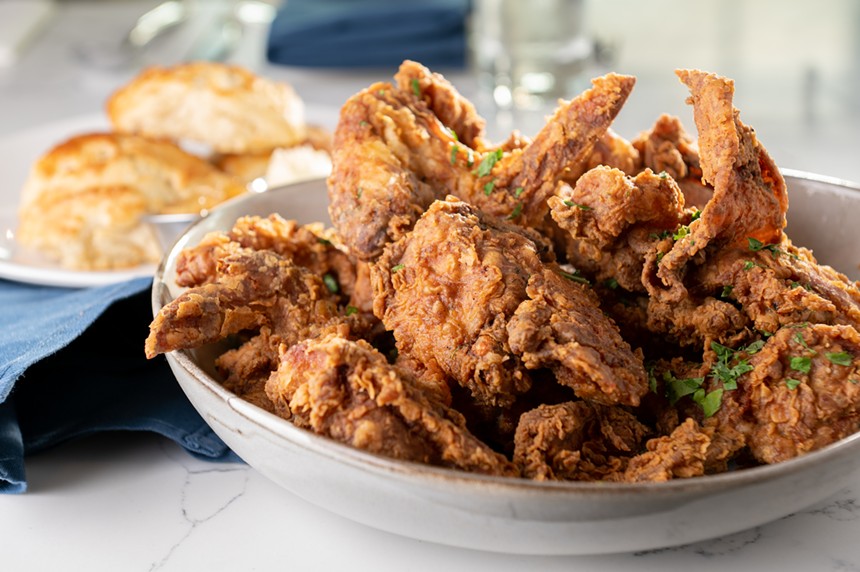 Duck-fat fried chicken
Alison McLean
For $56, Roots will bring out a huge platter of fried chicken — the cocktails were interfering with my counting skills, but I think it was 10 or 12 pieces — plus a plate of biscuits, a bottle of hot sauce and a small cup of candied rhubarb slices. The ultra-sweet rhubarb flavored with pickling spices is an acquired taste that this author didn’t acquire. Everything else is terrific.

The chicken is brined to keep the meat tender and juicy, marinated to give it a gently spicy heat and then fried until a deep, dark brown. Now, there may be no food in the world as personal as fried chicken. Everybody likes fried chicken best if it’s made the way they grew up eating it, and there are a dozen global cultures with their own distinctive preparations. A chef like Derry who makes this dish a specialty is, in a way, baring her soul to hundreds of customers who could take a bite and say that it’s good but it’s not the way Mom does it.

No, this isn’t the fried chicken I grew up with — but it’s great. I love the crisp batter, which has crunch but isn’t too thick. The spice kept me reaching for more pieces. The biscuits range from perfect to slightly tough, so use them to make a sandwich. As for the hot sauce, well, here’s another menu item I’d buy in great big jugs. 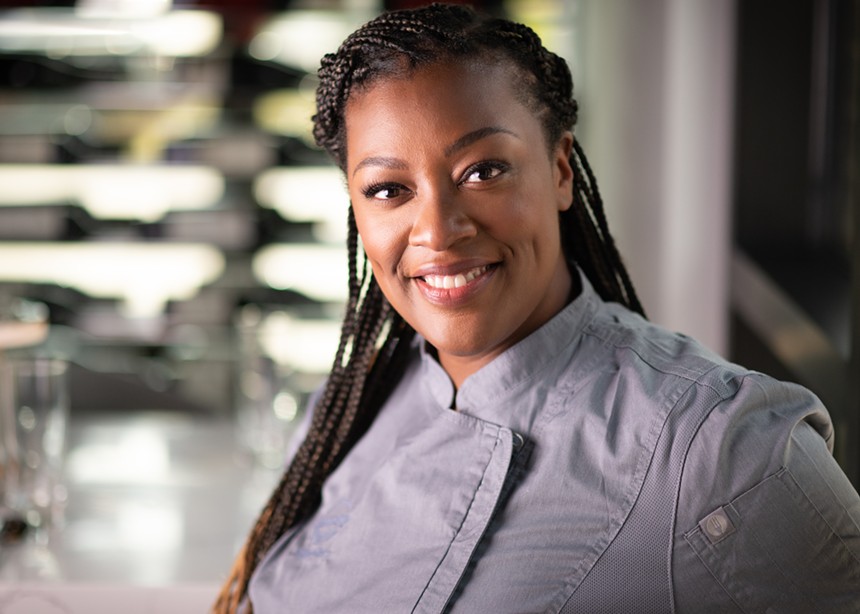 Chef Tiffany Derry
Alison McLean
Roots isn’t perfect; no restaurant is. Some of the issues we met were tiny, easy fixes, like the scallop with the clump of grit, or a side that got saltier between our visits.

My only real quibble is that the drink list is long but unvaried; wines are big and rich and cocktails are fruit-forward. For a drinker without a sweet tooth, the Uncle Nearest old-fashioned is a refuge, made with a Black-owned whiskey brand named for Nearest Green, the Black man who mentored Jack Daniel. By the way, keep a bottle of Uncle Nearest at home to drink neat.

But those are the kinds of tiny complaints a food writer has to make so that the reader knows the article isn’t an advertisement. Roots is a joy, pure and simple. Come for the chicken, stay for the veggies, gumbo, warm welcome and the sight of a kitchen full of gifted cooks at the top of its game, finally able to fulfill the dreams its chef has held for years.