Alison McLean
Invasion in East Dallas has a couple of spicy chicken sandwiches to choose from.
The hot chicken wave hath cometh. Left in its wake are copious amounts of spicy sandwiches and foreheads glistening with a light sweat. To be honest, this is a trend we're pretty jazzed about. In just a year's time, we've gone from a handful of spots to about two dozen places, and it's high time to round up the best of these cluckers. 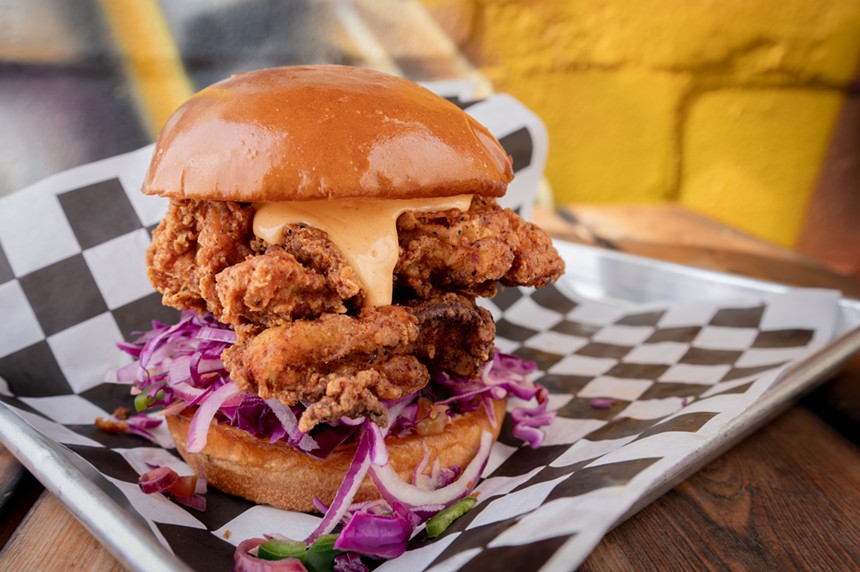 The Cardi B at Invasion
Alison McLean
You actually have two options at Invasion. The Nash-ty is technically their "Nashville-style" chicken sandwich, and it's a beautiful hot mess topped with a spicy sour cream ranch sauce and pickles. The Cardi B comes with a spiced special sauce and a pickled coleslaw jalapeño blend. Both are served on butter-toasted brioche buns. And we'd eat either to get a spicy chicken sandwich fix. This small East Dallas sandwich maker uses halal chicken, which some say tastes better and even gives way to a crispier skin and crunch. A takeout chicken sandwich, plated at home, from 2 Neighbors, in DeSoto
Brian Reinhart
One of our 100 Best Restaurants, 2 Neighbors offers baskets of Nashville-style hot chicken in wing, nuggets, chicken tender form. They also have catfish. But their beaten flat chicken breast sandwich stacked with coleslaw and pickles on a brioche bun is perfect. The heat here isn’t out to murder your taste buds. If you do like it hot, order accordingly but be sure to grab a house-made banana pudding to put out any lingering flames. 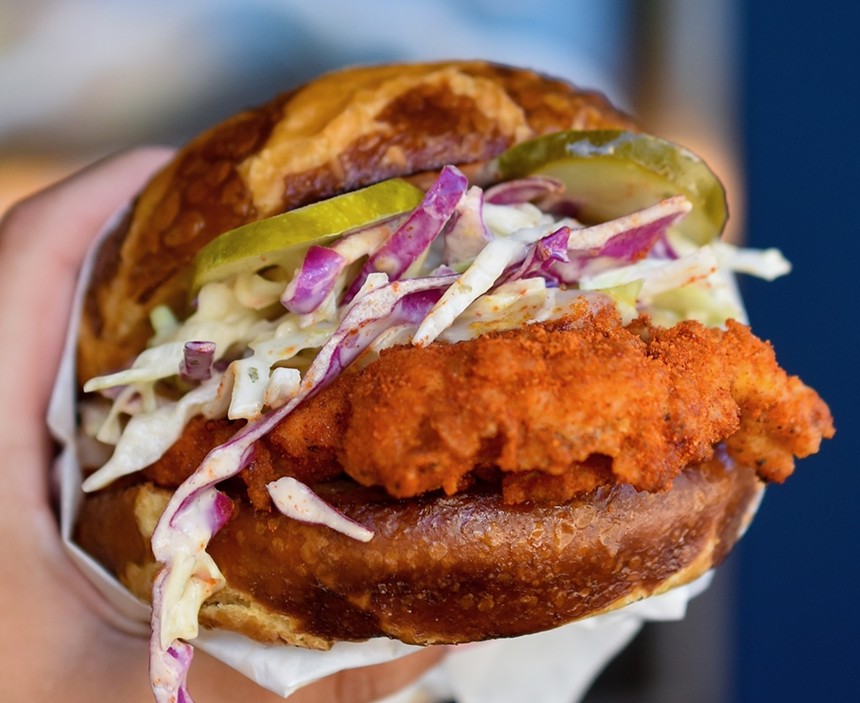 A special anniversary edition of the Big Lou at Lucky's, made with a pretzel bun.
Lucky's Hot Chicken
Lucky’s is part of the Vandelay Hospitality Group, which includes East Hampton Sandwich Co., Drake’s Hollywood and Hudson House. They opened their flagship location in the fall of 2020 on Gaston Avenue in the mid-century building where Norman Brinker had his first restaurant. They have another location in Highland Park with several other spots on deck. Their Damn Lucky spice on their Big Lou sandwich with their house-made comeback sauce is a winner-winner chicken dinner. Don't sleep on the Animal Fries, which comes with melted cheese, comeback sauce and jalapeño ranch. Cool all that off with a soft-serve swirl after. 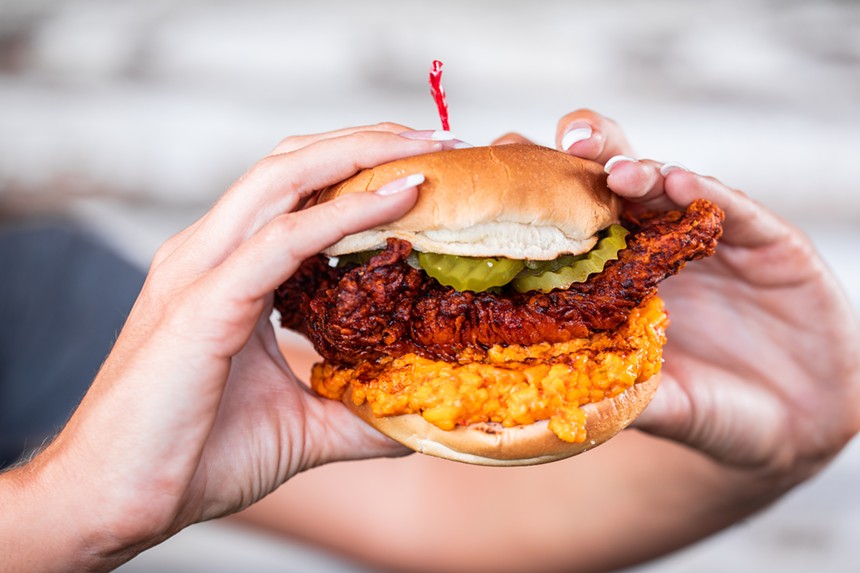 A thick layer of pimento cheese serves as the base for this Mother Clucker.
Kathy Tran

This Lakewood spot won our Best Hot Chicken because of its meticulously crafted recipe. Founder Palmer Fortune lived in Nashville for 30 years and opened this spot based on what he learned about after eating decades worth of these sandwiches. The recipe for the fried chicken pays homage to Thorton Prince, the original Nashville creator, and supposedly mimics the original recipe without any modifications. Everything here is made from scratch including sides, sauces and desserts. Palmer's MotherClucker sandwich comes with fried breast meat topped with pickles over pimento cheese. You can sub a waffle for your bun. Beware of the napalm heat level, it’s no joke.

The Spicy Bird at Roots Chicken Shak proud as a peacock
Lauren Drewes Daniels
Prior to opening her restaurant Roots Southern Table, chef Tiffany Derry opened this small spot inside Plano’s Legacy Food Hall serving duck-fat fried chicken and fries. The Spicy Bird is a beautiful sandwich topped with seasoned kale and held together with a sweet potato bun. Jack cheese is seared to the chicken just before it’s served. Kimchi mayo adds a punch to the flavor menagerie. Remember you can order ahead at Legacy Food Hall, and we highly recommend it as Derry’s spot usually has a line. And don’t ever pass up an opportunity to have the duck fat fries. 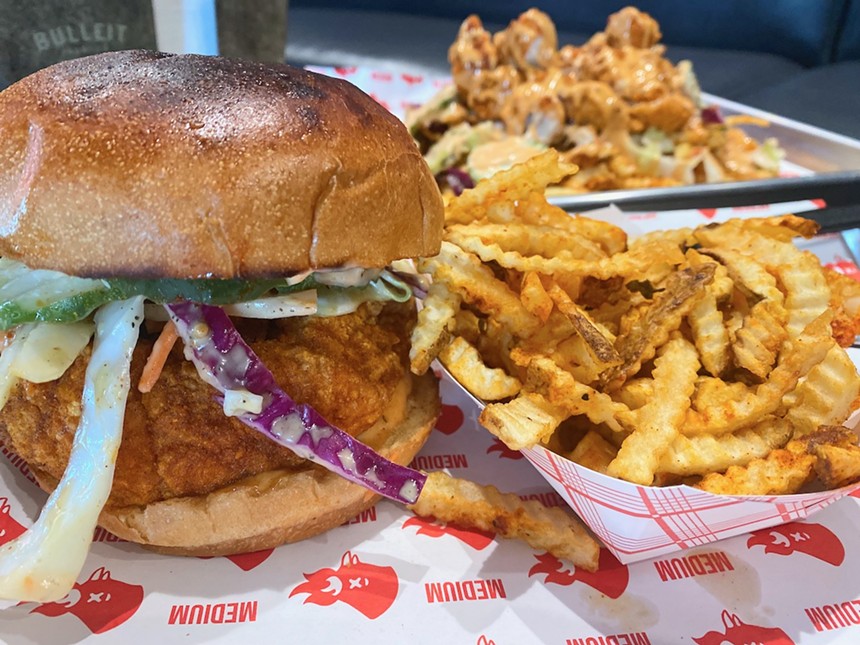 Hot Chicks also has hot chicken fries, as shown in the background.
Lauren Drewes Daniels
Hot Chicks just opened in Dallas proper, but they already have restaurants in Plano and Weatherford. This spot is owned by One Entertainment, which has other concepts including the popular Forth Worth bar Texas Republic. The recently opened Hot Chicks on SMU Boulevard opened in tandem with a new Texas Republic. So you can go to the bar and order hot chicken. Hot Chicks, which serves only halal chicken, has a challenge that offers one lucky person free chicken for a year if they can eat three of their Hot AF chicken tenders without drinking anything for 15 minutes. Everything is made in-house here, including the slaw, hot sauce and even their pickles. Watch out for hot chicken trash can fries that they’re working on for the new Dallas location.

Danny Gallagher takes a bite of the reaper, the hottest level at Dave's Hot Chicken.
Jerry Nerviano
Dave’s Hot Chicken is straight out of an East Hollywood parking lot. It’s got some street cred though; the founder trained in Thomas Keller’s French Laundry organization. They now have restaurants around the U.S. Like Roots, they also have a kale slaw and their own housemade sauce. Our very own Danny Gallagher taste-tested their seven levels of heat, starting with no spice, which offered crispy skin and juicy meat, all the way to the reaper, which he compared to a “spice ninja that creeps up on you and strikes just when you think you’ve conquered it.” Proceed with caution. Or be bold just order a milkshake to go with. 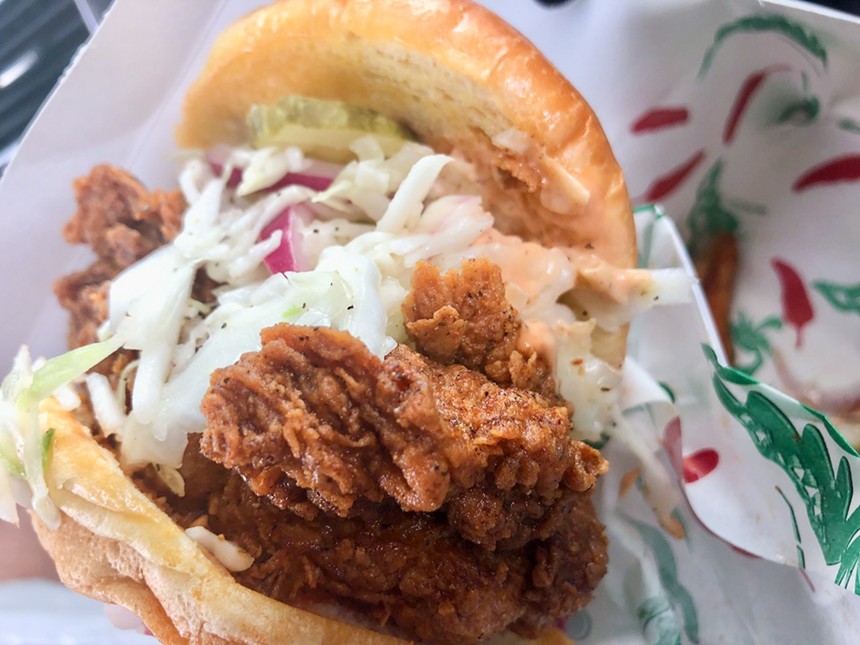 Red Claws' Nashville hot chicken sandwich: It's a bit hard to handle, we but promise you'll figure it out.
Lauren Drewes Daniels
Way back in June of 2020 we wrote about the hot chicken sandwich at Red Claws Crab Shack. They started pushing out these sandwiches early on in the tidal wave of red fried bird. They’ve also recently opened a Red Claws Hot Chicken in Fort Worth, but their true-to-form Nashville hot chicken sandwich is still on the menus at their crab shacks in Dallas and Arlington. The thick, crispy dark red crust encases a juicy breast that is topped with a vinegar slaw to help quell the fire. To help put out any lingering heat, they sell shaken mixed drinks like mai tai, Blue Lagoon and Swamp Juice. The Nashville chicken sandwich at FireHouse Gastro Pub
Lauren Drewes Daniels
Jason and Carlee Smith opened FireHouse Gastro Park a few years ago after moving from Los Angeles to Grand Prairie (Carlee's hometown). Before leaving the West Coast, however, they grabbed chef Zaida Johnson, whom they'd met through their work in event planning in Hollywood, to help them open this restaurant. And we're all better for it. Not only is this restaurant, bar, coffee house and outdoor music venue a vibrant fun place to waste an afternoon or two, but Johnson's Nashville Bird chicken sandwich is worth a trip out to central GP alone. You can also order this sandwich as a giant mound of fries to share with your besties. 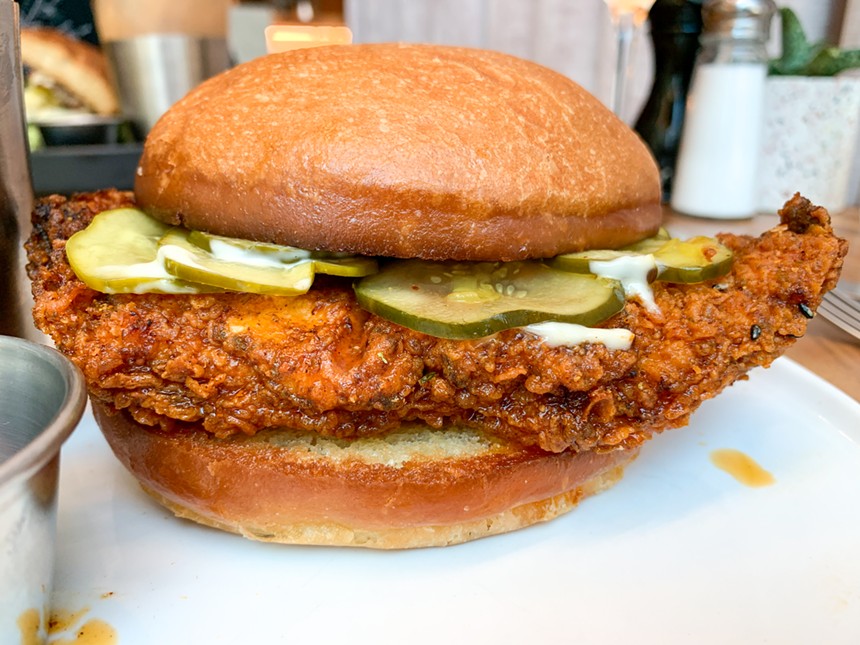 Nashville hot-fried chicken sandwich
Jennifer King
When Sloane's Corner first opened, the Nashville hot chicken sandwich was a daily special, but it's since been added to the regular menu. Thankfully. A house-made brioche bun is toasted with butter on a flat top before cradling the buttermilk fried chicken, topped with Fresno peppers, pickles and aioli. This sandwich is unique because chef Ji Kang uses the seven-spice blend togarashi in the mix. It's simple and magnificent.

Go ahead. Roll your eyes. But economics matters too. You can feed a small family for $20 at Popeyes. And their spicy chicken sandwiches are on point; much better than the ubiquitous tired chicken patties you find at other fast-food restaurants. For $3.99 each, this is the best spicy chicken sandwich deal anywhere.