Vera "Velma" Hernandez
Modest Mouse singer Isaac Brock (left) with Russell Higbee. The band gave the fans the songs they wanted to hear.
Modest Mouse's Thursday night show at Pavillion at Toyota Music Factory turned the Irving venue into a nostalgic rager. Doors were opening at 7 p.m., but people bagan lining up by 6 with their vaxx cards or negative test results in hand. There were rapid testing pop-ups set up for those who had neither.

The first act up was Empath, a band from West Philly. Their set up showed the chimes draped over the drumset, which was front and center with the rest of the band mates, instead of in a usual position in the back. And it's no wonder; drummer Garrett Koloski drove every song with never ending dancable tom-drum heavy beats. Catherine Elicson's vocals delicately wove through the barrage of beats and waves of duel synths, recalling the definite sound of early 2000s indie film soundtracks, but with more chimes and the whimsical sound of bird chirping.
click to enlarge 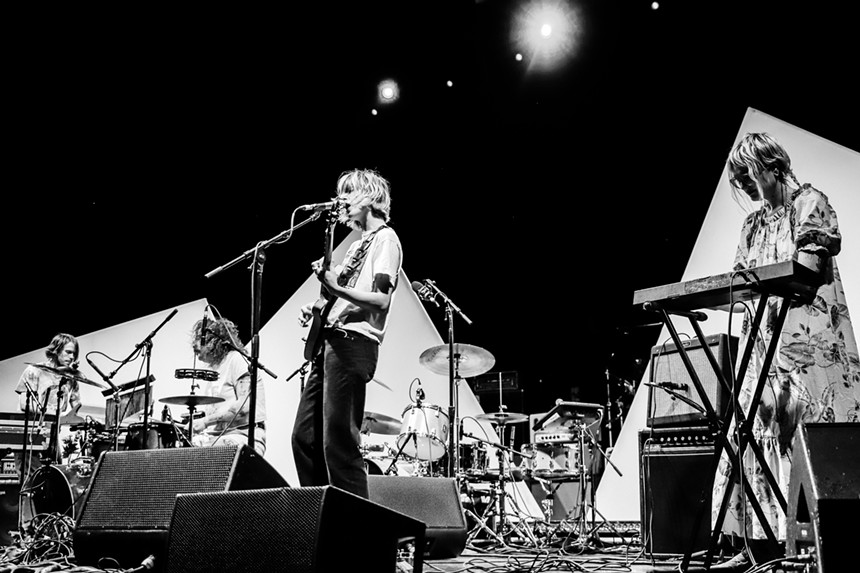 From left: Empath members Randall Coon, Garrett Koloski, Catherine Elicson and Jem Shanahan.
Vera "Velma" Hernandez
By the time Future Islands hit the stage the crowd was in full swing. Their fast disco hi-hats and melodic synth and bass cut through the air, recalling the heartwrenching lyricism of The National and pop sensibility of White Lies. Frontman Sam Herring threw everything he had at the stage. Literally. During " Hearts Grow Old" he threw himself and the mic on the floor and crawled along the stage dragging all emotion with him.

The crowd danced along, taking cues from Herring's high kicks to jump rhythmically to every song. Fans who were waiting on Modest Mouse would not be disappointed with the setlist once they started. Starting off with "Fuck Your Acid Trip" from their latest album The Golden Casket, and following it with "A Different City" with practically no banter in between songs, Isaac Brock's band hit every deep cut, strategically playing only five tracks from their latest album in their 17-song set. Of course, once the banjo got started, the anticipation was heavy with fans who knew they were about to play "King Rat," waiting with bated breath to scream out "Well!" along with Brock.
click to enlarge

Modest Mouse delivered for fans, from their most popular hits "Dashboard," "Float On" and "Lampshades" to their deeper cuts "Devil's Workday," "Dramamine" and "Cockroach." It was truly a set for long-time fans, and it left newer fans wanting to go back through their catalog.
click to enlarge