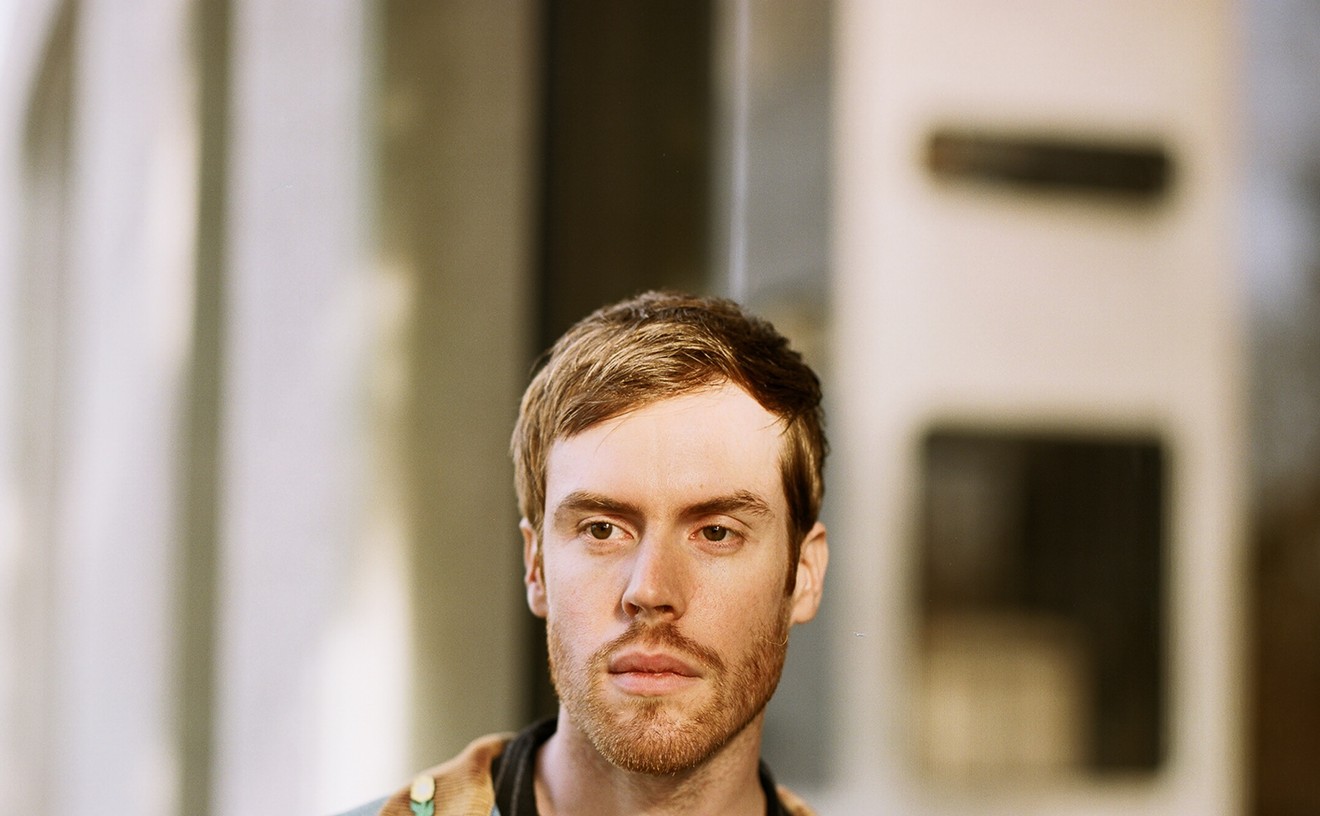 Ahead of the band’s show with Beach Fossils at Amplified Live in Dallas on Wednesday, Oct. 13, Tatum is speaking to us from a hotel room in Chicago. It's one of the few moments on tour in which he is stationary, as he's playing two consecutive nights in Chicago.

“Always nice to get a couple of nights in a row,” Tatum says, laughing. “It’s huge, so nice to sleep in. It’s like a dream to play somewhere two nights in a row.”

In the year and a half since the world plunged into the grip of the pandemic, Tatum’s life has gotten much sunnier. He and his wife had a son at the beginning of 2020, and the cessation of touring put a hold on the rat-race pace of the music industry.


“My life has changed in so many ways over the past couple of years, and it would have regardless of whether or not a global pandemic happened,” Tatum says. “It definitely changed the way I work and how I approach releasing records and how I want to approach touring and kind of strike a healthier balance. Before I was always content to feel like ‘Here’s my allotted recorded time, I’m gonna totally throw myself into making a record and then go on the road as much as possible.’

"I have to be much more thoughtful about how I do things and plan things now. Which is kind of nice, you know?”

Ironically or appropriately enough (depending on your point of view) the typically solo-working Tatum now craves more collaboration in the wake of the prolonged isolation. After all, songwriting governs the songwriter. So, in the case of an isolationist joining working hands with another, how does one make collaborative songwriting work?

“I do [crave collaboration], but also it’s working the challenges of chasing ideas when they come," Tatum says. "That’s one thing that’s been on my mind so much lately. My creative time is extremely precious, now I don’t have as much of it, so I have to be precise about the way that I do that. It’s hard, because when I was younger, I could just wait until the ideas came — if it was the middle of the night, so be it — but now I can’t do that anymore.”

He continues with a sharp laugh: “That’s one thing, but when you throw another person in the mix, it’s in some ways more of a challenge because that spark has to line up for multiple people. But also, you have twice the idea power, so you’re not the only one banging your head against the wall. I definitely crave that collaboration more than I used to.”

Last year, Wild Nothing’s smash debut album Gemini was reissued in celebration of its 10th anniversary, but don’t hold your breath down the road for a 45th anniversary edition of the album with hours of outtakes. Tatum says there aren’t any.

“That stuff doesn’t exist because of the nature of how I was working at the time,” he says. “It’s kind of a miracle that this record even happened. There was no demo process. The demos are the record. There’s no work-in-progress versions of any of these songs. It really was that I would just write a song, record it in a couple of days, and once I had 11 songs, I sent it to the label to see what they thought. They were like, 'Yup, sounds good, let’s release it.'

"It’s funny to me the longevity this record has had at any sort of level, because the whole thing felt very haphazard in a way.”

Wild Nothing’s subsequent records were recorded more traditionally in a studio environment, so even though outtakes, demos and other versions of tracks from other records may exist, he’s still on the fence about letting the public peer into the artistic process.

“People have different opinions on that,” Tatum says. “Some people want everything they can get and they like the rawness and realness of it — seeing the steps it takes an artist to get to a certain place. But I think on the artist’s side — and I feel I’m this way — I don’t necessarily want people to see that stuff because I got it to where it was for a reason. You put in all this effort for it to sound a certain way. I don’t necessarily care to show people the process side of it."

Tatum feels that way about his own material, but as a fan, he appreciates the extra insight.

"At the same time, Prefab Sprout is one of my favorite bands of all time, and there’s a whole slew of acoustic demos from their records," he says. "And that to me is interesting, because it’s sort of how he wrote these songs and you can hear how the production changed them. But there’s only a handful of artists that I feel I’d want to go that deep with.”

In his case, Tatum says, it’s difficult to even know when a record is truly "finished."

“It’s hard to get out of your own head,” he says. “Continuing to tinker is not always the best thing but it’s hard to stop. Even still, sometimes I just have to press the stop button on a record, because if I just keep tinkering forever, it’s never gonna come out.”

Essentially, Tatum is Wild Nothing. Or at least that’s how it started. Gemini was entirely written and performed by Tatum himself. On more recent albums and in recent times, he has brought in other musicians to help out with the recording, but the songwriting remains Tatum’s baby (one of them, at least).

The notion of the single-minded, omnipotent artist is a tricky one, as Tatum acknowledges that while he has been that sort of artist in the past, collaboration is becoming more appealing, and the "band dynamic" is something he admires more and more.

“I’ve taken a lot of inspiration from people who do that, the sort of ‘one person band,’" he says. "Todd Rundgren and Prince in particular are monumental artists for me. On one hand, whenever I do find someone like that, I can relate on one level because I think I kind of do that. I feel a bit anal retentive in the same way, but at the same time I don’t want to glorify people for doing that too much. I’m getting to the point where I think it’s a bit cooler that people are able to make collaborative process work really well. I’m more jealous of groups that historically have two or maybe three songwriters that just click.

"I’m getting to the point where I think it’s a bit cooler that people are able to make collaborative process work really well. I’m more jealous of groups that historically have two or maybe three songwriters that just click." – Jack Tatum


Another one of Tataum's favorite bands of all time is The Go-Betweens.

"In that band you had two songwriters in the Lennon/McCartney tradition," he says. "It just makes those records so much richer because you can instantly tell when a song is written by one of them versus the other, but at the same time it still creates this whole experience that makes sense. I’m envious of that, I suppose.

“When Wild Nothing started in 2010, it wasn’t super cool to put yourself out there or make yourself be the focus of anything,” Tatum says. “It was frowned upon. I’m not passing judgment as to whether or not that was a good or bad thing, it was just the truth of where things sort of were at the moment. It was way cooler to be anonymous than to put yourself at the center of it. That has changed a lot. Different priorities.”

Nowadays, the comfort of anonymity is practically nonexistent in the TikTok era when one’s personal life, or a version of it, is essentially one’s brand. Luckily for Tatum, individually focused social media marketing was not as much of a necessity when Wild Nothing debuted a decade ago.

“It really wasn’t, and thank God, because I’m not good at it,” Tatum says. “I don’t like marketing myself. I’ve been sort of lucky that I’ve been able to get away with rolling with whatever press does happen to come my way. Whatever push comes from the label or people I work with. If I was trying to break right now, I don’t think I could do it. I don’t think I would be able to reach the place where I am now if I was starting in 2021.

"I have a lot of compassion for artists that are trying to make it at the moment. Like, I don’t even know what kind of advice to give anymore, which makes me feel weird and old because I haven’t been doing this that long. I’m only 33. Things have changed so much, I don’t even know.”

One bit of beauty inherent in aging is that one can relax and let the younger generation handle their obstacles in their way, while the slightly older generation is accustomed to different ones.

“It’s whatever. It’s just a generational thing,” Tatum says. “Younger people are better at it. They probably enjoy doing it more than I do. Which I have zero faults with. If you’re down to be on Instagram all day, I’m cool with that. I’m still able to make records and play shows. There are people out there somewhere that are still on this ride with me. I’m lucky. I’m very happy to be where I’m at.”