In a New Book, Denise Montgomery Recalls Learning About Racism Through the State Fair

Sherry Benjamin
Author and DISD teacher Denise Montgomery with her book at the State Fair of Texas in 2019.
Gray clouds covered the sky as raindrops fell outside of Denise Montgomery’s front door window. It was the second Monday of October in 1965.

Every year on that day, Montgomery and her family would take the day off and visit the State Fair of Texas. She was ready and wore her uncomfortable black-and-white Oxford dress shoes and her hair in pigtails.

By 10 a.m., her grandma called it. The family of six would not be visiting Big Tex this year.

The sacked fried chicken that was set to be their lunch was set aside. Little Denise Montgomery was left heartbroken. The State Fair was opened throughout the month of October; she was confused as to why they couldn't just go another day. No one told Denise the real reason they weren’t going to be visiting the fair for at least another year. It was because of the color of their skin.

Back then, the second Monday in October at the State Fair of Texas was known as “Negro Achievement Day” when Black visitors were allowed full access to the fair's grounds including its attractions and concessions. Montgomery would learn this years later. Her family’s dismissive approach to explaining discrimination was just their way of doing things.

Montgomery’s parents grew up in the 1920s where discrimination and segregation were common and another fact of life.

“We really just didn’t talk about it,” Montgomery says. “You just expected white people to treat you that way. That’s why you stayed away from them.”

At the dinner table, they didn’t discuss the racism they experienced or the fact that, among other arbitrary rules for Black families, there was only one designated day for them at the State Fair. There was no good way to explain it.

Montgomery’s experience may seem like a lifetime ago, but it still feels recent to her. Her memories are now part of her latest book, titled I Want to Go. The picture book, illustrated by Kristina Brown, is a fictionalized account of Montgomery's experience. 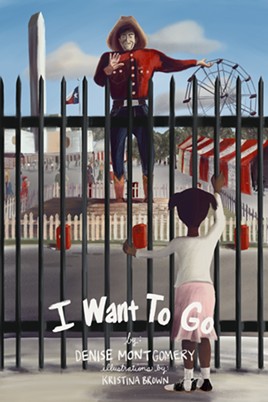 Denise Montgomery's picture book I Want to Go, is inspired by her childhood memories with racism, which she first learned about through the State Fair of Texas.
courtesy Denise Montgomery

In the book, Rene Thompson is a gifted child with a far-reaching imagination who more than anything wants, to visit the State Fair of Texas, despite societal setbacks and the protesting from her own family.

Montgomery, now a teacher with the Dallas Independent School District, made the story a fictionalized account to incorporate her own past with real stories of the civil rights movement, including figures such as Martin Luther King Jr.

“I never marched with Martin Luther King,” Montgomery says. “I do want kids to know about that, though, and the Voting Rights Act and more.”

The book is aimed at children, but Montgomery hopes that people of all ages and backgrounds can read the story and understand that legalized discrimination took place until not that long ago. Even years after the fair was formally desegrated in 1967, Montgomery still faced racism daily in other aspects of her life, including on bus rides to school.

Today, Montgomery enjoys the fair annually on her own. Now in her 60s, she makes a point to say hello to Big Tex, the giant figure behind the gates, who once seemed so far away. Montgomery still enjoys the sights and even visits the automobile show to which her grandma used to drag her.

The name of the street where the State Fair is held was changed in 1983 from Forrest Avenue to Martin Luther King Jr. Boulevard.

Now, the little girl she once was can now freely roam the fairgrounds — on any day in October.

“It was still nice to walk around,” Montgomery says. “I still have the memories.”