Kathy Tran
Seriously though, does my ass look fat in these jeans?
The State Fair of Texas closed out another season on Oct. 17. In 24 days more than 2.2 million people passed through the gates to enjoy all sorts of food, fun and revelry. Some 1,000 people received COVID vaccinations and got 20 coupons to use for either food or rides, laughing all the way to the Midway at all us sucker early adopters.

Last week the fair's public relations published a score sheet of sorts summarizing the amount of food consumed over the 24 days. Here’s the highlight reel.

Let's not stop there though. 520,000 corn dogs are about 50 miles of corndogs if they’re all lined up nose to tail. So you could make a line of corn dogs from the front gate of the State Fair along Interstate 30, past Jerry World, past downtown Fort Worth it would end somewhere east of Weatherford. 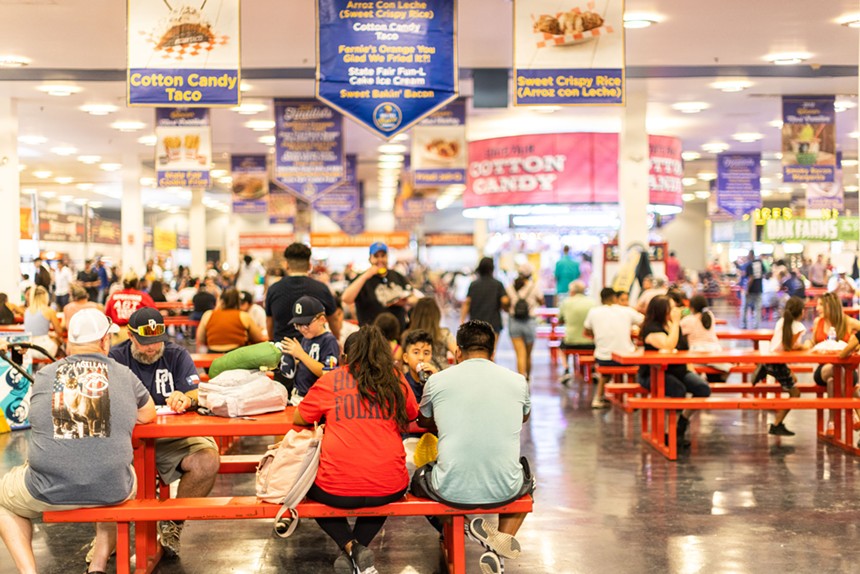 The food court in the Tower Building at the State Fair of Texas.
Kathy Tran
Cane sugar used for cotton candy is also a premium staple at the fair. This year, more than 80,000 pounds  of cane sugar was turned into pink wisps of cotton candy.

Mac Loaded, a new vendor serving bowls mac and cheese topped with meat, went through more than 2,000 pounds of brisket and 2,900 pounds of noodles for over 5,500 bowls of mac and cheese. For a freshman, those are some pretty good numbers.

The Big Tex Urban Farms donated 19,200 pounds of fresh produce to the communities of South Dallas and Fair Park. Since this project began back in 2016, the farm has produced more than 80,000 pounds of produce.

200,000 pounds of canned food were donated to the North Texas Food Bank at the State Fair gates (fairgoers received $5 off a ticket for every five cans of food).

Also, did you know that babies animals are born at the fair out in the livestock barn? Yep, the fair welcomed more than 50 little balls of fur this year. And 24 dogs found their fur-ever homes through the DFW Rescue Me project.

The 73rd Annual Big Tex Youth Livestock Auction raised a record of $1.7 million. The grand champion steer was "Sold!" to the Jim Prewitt Memorial Fund for $126,000.

Lastly, the State Fair of Texas awarded more than $1 million in new scholarships to more than 200 students throughout Texas. If you’re a high school senior or seasonal employee, go ahead and jump online at BigTex.com/Scholarship and apply for the 2022 round of scholarships.