Vera "Velma" Hernandez
Bristol band IDLES played to an overpacked crowd on Tuesday.
It was a dark and cloudy Tuesday night on Greenville Avenue with an ever-present threat of rain looming in the sky. The IDLES show scheduled for the Granada on had been sold out for some time, but late last week, the venue released a limited number of tickets to really pack the house. By 2 p.m. Tuesday, the show had sold out once more.

Before the show, IDLES requested (as the Granada made clear in all correspondence about tickets) that all attendees show proof of a negative PCR COVID-19 test within two days of the show, or for fully vaccinated attendees to show their vaccination card, with the final shot required to be at least two weeks before the show. Fans had to wear masks inside the theater when not eating or drinking.
click to enlarge 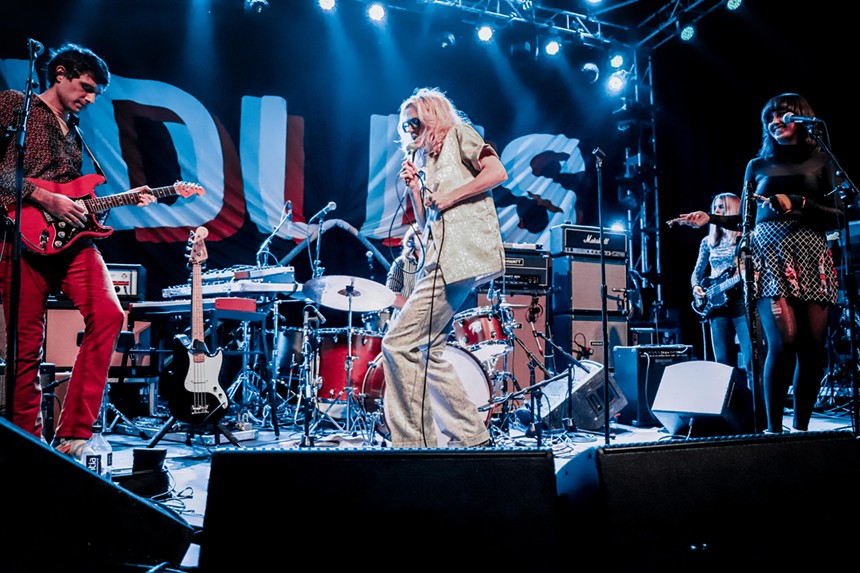 Though COVID protocols were in place, entry went mostly without incident; however, the line wrapped around the venue as staff checked IDs and medical records, slowing down the pace of entry and irritating some fans who missed the opening act as a result.

The IDLES introduced new material to the audience at its Granada show.
Vera "Velma" Hernandez

The pairing of the bands was well thought out, as Gammill’s commanding and confrontational presence had even those who were unfamiliar with the band pogoing before the end of the third song.

“What do you want, Dallas?,” Gammill asked, to which a fan yelled, “Love!”

As much as the Granada enforced COVID protocols, they allowed fans to crowd stairways and walkways to accommodate an oversold crowd. The mask mandate also didn't last long, either.

The night’s headliner, IDLES, started early at 9:03 p.m. and played tracks from all of their Partisan Records releases, leaving behind all of their early work for fans to keep in their heart. The band drew heavily from their 2018 release Joy as an Act of Resistance, playing three-quarters of the songs from that album, including the band’s opener “Colossus”; the crowd sang along with fury to the song’s refrain: “It goes and it goes and it goes.”

The sprawling 90-minute, 19-song set included three new tracks from their upcoming release Crawlers, which is due out Nov. 12.

The Bristol lout-rock band wasted no time in introducing the new material to the captivated and frenetic audience, introducing their new song “Car Crash” to a wall of silently intent listeners.

The song played like its title suggests, slowing to a crawl before careening into the “Smash of a car crash,” as the lyrics go.

IDLES also played nearly half of their 2020 release Ultra Mono as well as a few songs from their first album, 2017’s Brutalism, to fill in the gaps.

After their new song, IDLES played two songs from Ultra Mono — ”Mr. Motivator” and ''Grounds” — followed by “Mother” from Brutalism.

“Mr. Motivator,” surprisingly started without its command to “Repeat after me,” instead flowing right into “I am I,” the song’s rallying cry.

When the band went into “Grounds,” it was pandemonium, with the crowd taking over the vocals for the song’s response to “Do you hear that thunder?”

“That’s the sound of strength in numbers!”

Singer Joe Talbot took a break after the song to tell the audience that the last time they'd played Dallas it was at the Curtain Club, and thanked the audience for welcoming them back, for supporting the band and live music in general.

This was followed by a breathtaking performance of “Anxiety” that had the crowd slamming to the song’s racing pace and guitarist Lee Kiernan taking backing vocals like a madman.

The crowd cheered as Talbot introduced “Samaritans,” dedicating the song to the audience.

When the band played the opening to “Never Fight a Man with a Perm,” made famous by that scene in Peaky Blinders in which Oswald Mosley takes the podium at the fascist rally, the crowd erupted in cheers. People on the Granada’s second tier no doubt felt the floor fall beneath them as the crowd jumped in rhythm to the beat.

For all the hype that has surrounded the group, IDLES delivered every penny’s worth of the ticket price.

You could see it in the contented smiles of the fans as they left the venue. You could feel it in the reverberation pounding in your chest even after the drive home.
click to enlarge