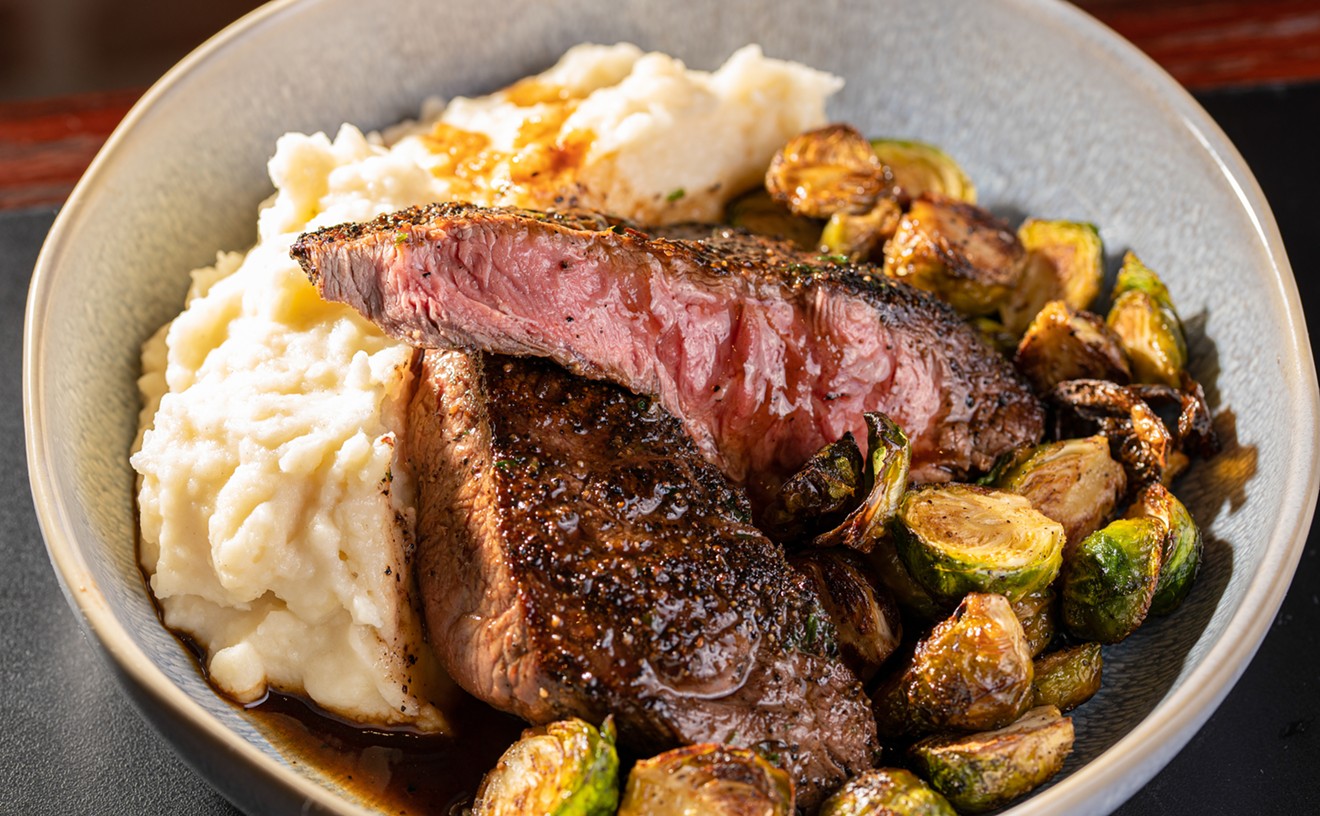 Alison McLean
Pepper crusted flat iron steak with compound butter, whipped potatoes, brussel sprouts
In the spring of 2020, Mark Wootton pivoted like so many others did by making his restaurant takeout only, doing his best to translate his homestyle Southern-style meals into suitable assortments in Styrofoam.

But soon he closed Garden Cafe for much of the duration of the pandemic. The restaurant is just now in its fourth week of operation since reopening with an overhaul that has upgraded the dining experience.

While East Dallas residents missed the pancakes, meatloaf and spending time on the restaurant's picturesque patio, Wootton was hard at work getting community and city leaders to support the one thing that was necessary before reopening the doors. Bartenders are using beer and wine for cocktails.
Alison McLean
It’s something he had wanted for years, but city code wouldn't allow it and talks came with some resistance — some people assumed yahoos would wander through the garden, running into towering okra plants while spilling merlot on Swiss chard. But finally, support came: Neighbors were for it, the City Plan Commission was for it and the City Council gave its OK.

But adding beer and wine on a menu wasn’t all that needed to be done: Wootton also changed the counter where people use to order food to a bar and he developed a dinner menu.

“The vibe, the DNA is the same, but it’s also like opening a new restaurant,” he says. The new bar of Garden Cafe
Alison McLean
The restaurant is now open Thursday to Sunday for brunch and dinner — the menu for the latter was basically ready to go after years of hosting weddings in the garden. Reservations are now also highly encouraged, something regulars are still getting used to.

That and the experience of walking in the door: Before, you walked in and got in a line to order at the counter. Now, you’re greeted by a host or hostess, asked if you have a reservation, then taken to your table where someone takes your order. Also, the coffee is no longer self-serve.
click to enlarge The back patio
Alison McLean

“For a lot of them, it’s probably a bit of a shock. It’s wildly different from the start,” Wootton says.

But people are adjusting, and they’re still filling that patio. It’s something Wootton’s thankful for as he's learning to accommodate the large dining space with a small kitchen.

“Ticket times have been an issue here historically, and they are now,” he says.

So he’s looking at consolidating some menu options to make it easier on the kitchen. But his staff is working hard, including his chef Ricardo Perez, with whom Wootton was able to collaborate and let uplift some dishes.

Also, all staff members — no matter how many hours they work — are getting $15 an hour minimum with preventative health benefits and earned paid time off.

“I did a lot of research on benefits,” he says. “If you do any kind of research on PTO, you find it benefits owners and staff — it reduces turnaround, and it makes people happier when they can confidently take time off and know they can make rent.

“I wasn’t going to open without offering that.”

On the brunch menu, you can find items you’ve seen for years at the cafe — those perfect pancakes, eggs with chorizo, cheese grits and omelets. Though now you can add a mimosa, michelada or a brunch cocktail using Trinity Cider. Beef cheek fries
Alison McLean
On the dinner side, Wootton is excited about a vegan alfredo (“excited” is an understatement with how he raves about it), while the beef cheek fries and pepper-crusted flat-iron steak are big sellers.

And there’s more than enough on the beer and wine lists to choose from.

Either way, one can now sip a mimosa while snacking on plate-sized pancakes in the garden. It’s no wonder Garden Cafe customers are so excited to be back.