Angie Quebedeaux
The plancha-cooked quail is wrapped in Jamon Serrano.
A new restaurant opened recently in Dallas’ Oak Lawn neighborhood and is getting a lot of buzz. Modest Rogers Kitchen & Bar is located at 3811 Fairmount St. in an adorable house right off Oak Lawn Avenue. It offers a great combination of Venezuelan, Spanish and Mexican cuisine with a Texas flair. The chef behind this concept is Modesto "Mo" Rodriguez, an El Centro College alum, who has worked at  Nonna and Carbone’s as a sous chef.

Rodriguez always had a dream of going to culinary school, and in 2015, his wife, Kathryn, encouraged him to follow that dream. After getting some experience under his belt, he felt the need to touch base with his Venezuelan roots and started cooking the food he grew up with while showcasing the flavors he grew to love after moving to Texas. In 2019, he launched a startup called Mo’s Plancha, which showcased Venezuelan cuisine with a Texas twist. Although Rodriguez has been in the U.S. since he was 8 years old, he still holds those South American roots close to his heart.

In 2021, he got the opportunity to finally open his own restaurant. The name of the restaurant came from a high school friend who joked that his name, Modesto Rodriguez, translated to Modest Rogers in English. The name stuck and a new concept was born.

The menu is small, but there are plans to expand it. For now, stand-out dishes unique to the Dallas food scene include his take on nopales (cactus) served with peppery radishes, herbs, fried shallots and a San Marzano tomato confit. Like okra, nopales can become slimy and mushy if not cooked properly. So, he finishes the nopales with a char on the grill and a fish sauce vinaigrette mixed in with the vegetables.

For a main entrée, you’ll be hard-pressed to choose. The most uncommon dish on the menu is certainly the Nantucket scallops in butter with fried corn ribs ($24). The scallops are perfectly sautéed and melt in your mouth with each bite. The corn ribs served with butter, sour cream and Parmesan resemble elotés.

Pan con tomate y ajo
Angie Quebedeaux
On the night we checked them out, they had added a few new items to the menu, so we went that route not knowing how long these dishes would be available. We started with pan con tomate y ajo ($9), which is six toasted baguettes with tomato, garlic, paprika and queso asadero. The delicious roasted tomato tops off the appetizer perfectly. 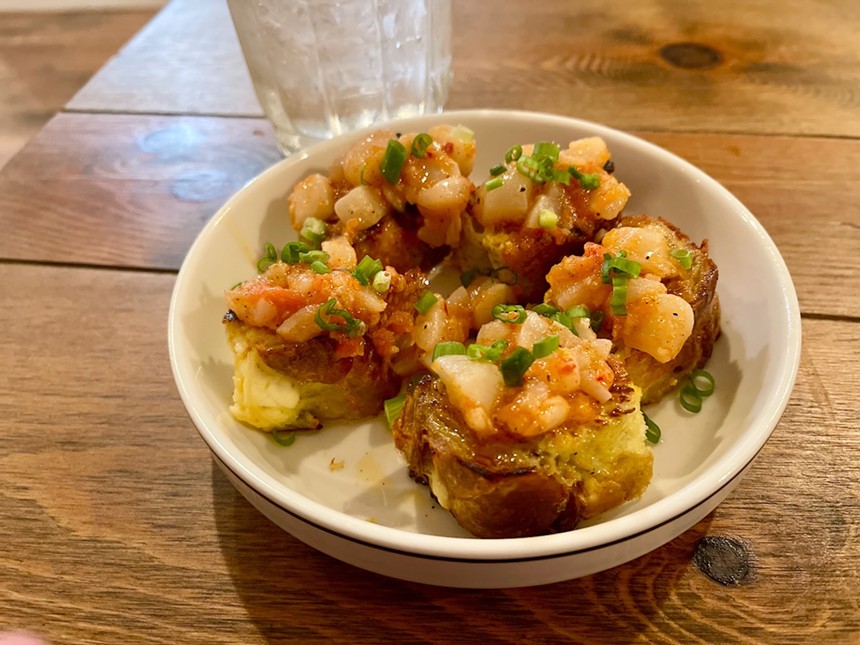 Scallop tartare and baked tortilla is a Spanish-inspired dish.
Angie Quebedeaux
The scallop tartare is made with five squares of baked quiche-like Spanish tortilla topped with a sea scallop tartare, tomatoes, garlic and paprika. The combination of flavors and texture set this dish apart from everything else we had. The quail a la plancha ($28) employs a flat-top griddle that combines high-temperature searing with a small amount of smoking (see photo at top). The perfectly cooked quail is wrapped in smoky jamon serrano and served on a bed of cabbage, roasted pepitas and oranges. We could’ve eaten 10 more of them. The cabbage was refreshing, bright, and crunchy and added a nice balance to the quail.

The ambiance at Modest Rogers is warm, inviting and casual. You feel like you’re walking into your family home, and it’s fun to watch Rodriguez and his team work. The outdoor patio is great on nice evenings. They will eventually open a temperature-controlled patio on the back-end of the restaurant too.

The restaurant is BYOB, but it's in the process of obtaining a liquor license