First Look: Casablanca is a Must-See Stop on the Silk Road

EMayne
Egyptian spiced lamb skewers
In the 1942 pseudo-noir film, Casablanca, a nightclub owner is caught in a dangerous love triangle with his ex-lover and her husband. It’s set in the Moroccan city of (you guessed it) Casablanca. Of all the bar names in all the world, the folks from Paradiso decided to expand its culinary options with a new restaurant by the same name. The outdoor lounge at Casablanca
EMayne
Casablanca is nestled in a newly remodeled building directly across the street from its sister restaurant, Paradiso, in the heart of Bishop Arts. From the expansive exotic patio to the exquisitely Arabian influenced décor, this place is gorgeous. If you miss out on the few tables on the inside, Casablanca has two lounge couches scattered with pillows perfect for hosting all your usual suspects.

At first, the menu may seem a bit confusing. There are Egyptian, Vietnamese, Chinese, Thai,\ and Middle Eastern favorites on the menu. That’s because the theme is inspired by places along the Silk Road, a 600-year-old network of trade routes that started in the Far East and connected with the Middle East and Europe. The menu includes four sections: dumplings, skewers and grill, noodles and a savory section that has falafel, Thai popcorn chicken, banh mi salad and pork belly.

We wanted to try items from different regions, so we started with the Egyptian spiced lamb skewers ($15), which are probably best shared with others. These massive scrumptious spheres are made with dukkha spiced ground lamb, sesame seeds, pink peppercorn and pork, even though the latter is not traditional meat found in lamb dishes. These balls of lamb come with a small smear of mild labneh sauce, which is a Middle Eastern cheese made from strained yogurt. The lamb was cooked exceptionally well for the Texas-size portion, we just wish there was more of that savory sauce to accompany it. 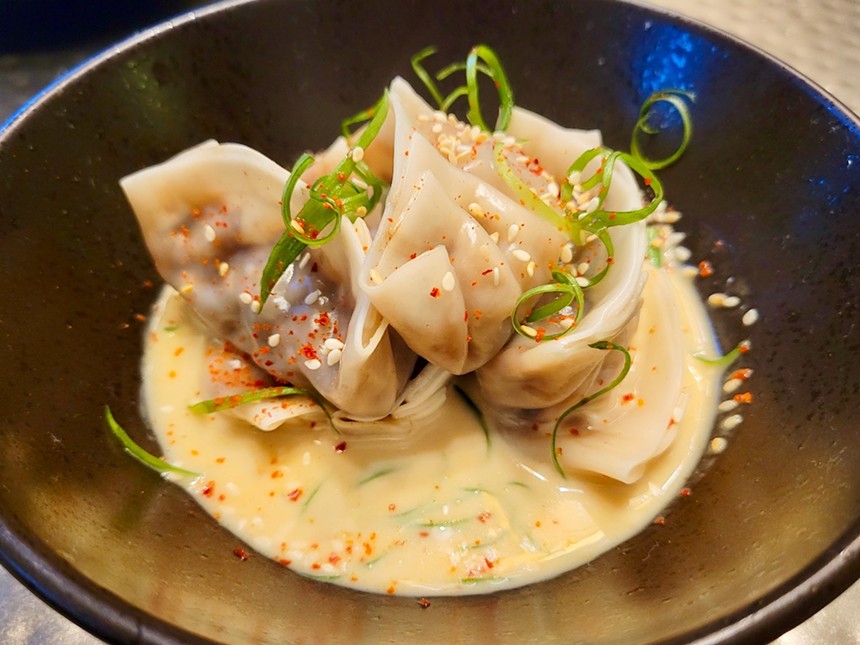 Chicken and mushroom dumplings are a mix of Thai and Chinese fare.
EMayne
Next was the chicken and mushroom dumplings ($12) soaking in a bath of tom kha broth. If you are fearful of being engulfed in spicy Thai flaming heat, you need not worry. This savory and creamy broth coupled with these Chinese-inspired dumplings were mild and delicious. This dish was the perfect blend of flavors and could be soothing heat for a chilly fall evening.

Red cooked pork belly made with lemongrass
EMayne
Also, on the menu was the red cooked pork belly ($14) made with lemongrass, ginger and crowned with a fried egg. From the menu, I thought it would be like two popular Chinese New Year dishes eaten for good luck because of the vermillion hue. Alas, the flavors were there but the pork belly was slightly over caramelized, giving it a charred exterior and a bit of bitter aftertaste. Mixing in the egg and rice helped quell some of the char, but this was not one of my favorites.

If the food menu was hard to get your head around, the drink menu is a doozy. The frozen cocktail Love at Midnight ($13) is a mix of toasted pandan coconut syrup, pineapple, lime, blended Scotch, Casablanca rum and bitters. The Smith and Such ($13) is made with celery, clarified apple juice, herbal liqueur, lemon, apple brandy, blanco vermouth, rum, gin, lemongrass, cardamon bitters and seltzer.

This place is new to the area and is already off to a great start and will likely soon be bombarded with curious patrons eager to snap pics in the Instagrammable scenery, especially when they wind of Casanova, a karaoke lounge with private rooms, that should open soon. We'll keep you posted.