Lauren Drewes Daniels
Chef Covarrubias trims, wraps, and smokes around 1,000 pounds of meat a week.
There’s a certain stereotype for Texas pitmasters, a look, a stature and a smell. Burly, a little greasy. Perhaps they walk like their knees hurt. But, as it is wont to do, Loro Asian Smokehouse, a culinary mashup of Central Texas brisket and Asian cuisine in Old East Dallas, is breaking stereotypes.

Judith Covarrubias, 39, is originally from El Paso. She moved to Dallas a little more than a decade ago. At the time she had a job in bill collections. But Covarrubias loved to cook. Back in El Paso, all her family traditions revolved around food and the kitchen. Her mom encouraged her to pursue a career in cooking, and before long she enrolled in Le Cordon Bleu.

After graduating, she started quite a ways back in the pecking order as a line cook at The Mansion on Turtle Creek. She moved to Oak, where she worked with chefs Jason Maddy and Brian Zenner. Year after year she worked her way up the line. Eventually she earned a spot at Uchi, first as a prep then as a head prep cook under the James Beard Awarding winning chef Tyson Cole.

Her bosses at Uchi knew Covarrubias enjoyed smoking meats at home. So when their goal of opening a new Loro in Dallas came to fruition, they asked her if she’d be interested in running the smoker side of the operation. 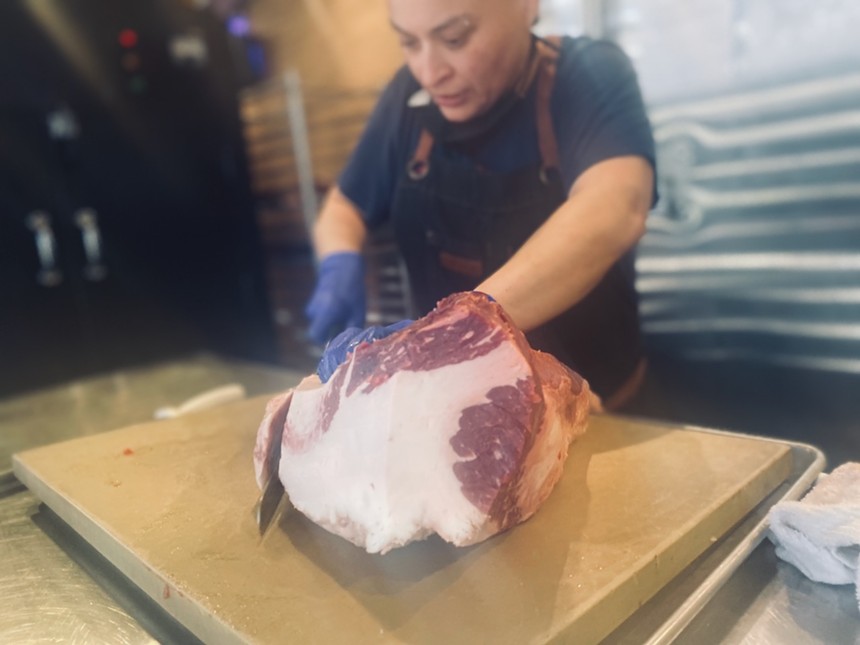 Trimming a brisket prior to wrapping and smoking.
Lauren Drewes Daniels
“I was a little nervous,” Covarrubias says while trimming fat off a slab of raw brisket in her smoke shack at the back of Loro. “I was like, ‘How am I going to carry this brisket when it’s half the size of my body. Am I going to be able to carry a case of it?'”

Before Loro opened, Covarrubias packed up for a two-week stint at the original Loro in Austin to learn the ins and outs of the smokers and the pace she'd need to keep at the restaurant: a "stage," as they say in the culinary world. When she got back to Dallas, Loro's chef de cuisine Mike Perez didn't have time to waste. “I came back and chef Perez was like, ‘So, are you ready to take over the whole thing right now?’ Yes, chef."

Her kitchen now is a partially open-aired, wood-slatted room on the backside of Loro. From the outside, it looks like a cattle car on a train topped with some weird steampunk-like engine. Inside, two tall black smokers bookend a table where she trims and wraps meat. A tall cooler and sink are on the other side. The space is immaculate.

Silver vents above the smokers are free of even a smidge of grease; cleaning them is a job that requires crawling atop the smokers, which Covarrubias boasts is easier for her thanks to her small stature. On the way out of the room after leading a tour, she sees a paper towel is dangling out of its receptacle above the sink and pauses just long enough to push it back into place before leaving the room.

The smokers at the back of Loro
Lauren Drewes Daniels
“One thing that surprised me about Loro was that you’re working from pretty much the beginning to the end,” Covarrubias says. “When you work in the line, you’re a prep cook, you prep, you know how to do it, but you don’t work or touch the food in the line. So you don’t know how it’s used in the line. Here, it’s like you have to make sure it’s perfect from beginning to end.”

Her days start at 5 a.m., something she was used to having worked prep at Uchi. On a normal week, she smokes anywhere from six to eight briskets early in the week. As the weekend approaches, it's more like 16 a day all with “rolling ready times.” There’s also turkey breast to tend to and salmon, which is cold smoked.

Covarrubias says every slab of brisket is different. “In the winter the briskets have more fat. If it’s hot outside it affects how they cook. I learned quickly I really have to see the bigger picture.”

Not all briskets are the same, so each one needs specific tending and trimming. A number of factors can affect how a slab of meat comes out including the weather and humidity. Properly wrapping the beef is crucial also. Wrap it too loose and it won't cook right. And once a brisket is pulled out of the smoker and unwrapped, there's no going back. Then there's the smoker itself. It has to be fed continuously and watched around the clock to hold a steady heat.

Something as simple as a thermometer not working can be costly.

Over Thanksgiving, a focus shifted to turkey breasts. They smoked 80 for customers to take home.

When asked about her size and the scale of the job, her boss chef Perez doesn't even pause to consider the question. "Judith is a very determined individual," Perez said. "What I love about her, is that if it was a worry, she would figure it out. That is just the type of person she is."