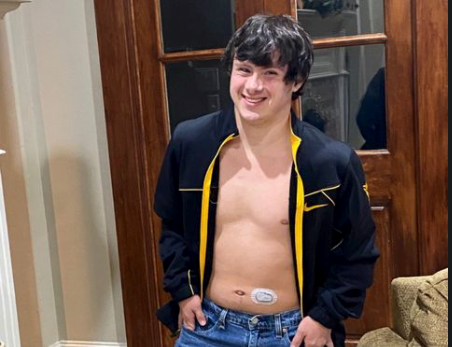 Screenshot from Instagram
Trevor Gray of Plano decided to finally get a Dexcom patch to help monitor his Type-1 diabetes when he learned his favorite singer Nick Jonas wears one. Jonas rewarded him with a story feature on Instagram.
Trevor Gray has Down syndrome and Type-1 diabetes. The 17-year-old Plano resident says he wants to "be able to be on my own and have fun," but sometimes it can be hard to manage with diabetes.

"He really wants to be involved," says his mother, Rhonda Gray of Plano. "He's part of the Young Men's Service League. He likes to volunteer. He likes to give back to the community. He's volunteered for Meals on Wheels and Feed My Starving Children. He's out there in the community helping and giving back."

Rhonda says Trevor's family and friends begged him to get a Dexcom patch installed but he was hesitant. A Dexcom is a sensor worn on the stomach that provides a continuous transmission to a person's phone to monitor their glucose levels without having to draw blood. Singer Nick Jonas featured Plano's Trevor Gray on his official Instagram page during National Diabetes Education Week.
screenshot from Instagram
But when the teen saw his musical idol Nick Jonas — the Jonas Brother star of the Disney Camp Rock series — wearing one, Trevor decided to get one as well.

"I'm used to it," Trevor says of the device. "It's easier because it tells me. It allows me to do things on my own."

Another person who was impressed with Trevor's decision was  Nick Jonas. He shared Trevor's picture on a story on his Instagram page during National Diabetes Education Week, where it went viral.

"I was home on the couch and I saw Nick Jonas send a text," Trevor says. "I got surprised so I played music from him from his Camp Rock days."

Trevor and Rhonda's phones started blowing up with alerts and text messages from friends and relatives who saw Trevor's photo on Jonas' page sporting an open leather jacket and his Dexcom sensor. The Instagram post even included a special message from Jonas to Trevor.

"I'm so proud of your dedication to helping friends, family and your community better understand Type-1 diabetes," Jonas wrote. "Your resiliency and positive attitude throughout your journey is incredible and I'm so lucky to count you as a friend!"

Students and faculty at John Paul II High School in Plano where Trevor serves as the Cardinals football team's "supervisor of morale" also saw the post, and it went around the campus.

"The whole school was talking about Trevor and sending screenshots of what they say and sharing on their stories," Rhonda says. "Trevor was so excited to see his friends sharing stories about him. He was very proud, very excited."

The support from Trevor's friends and his shiny new Dexcom sensor have been a huge help getting him to where he wants to be in life. Trevor says he wants to go to Richland College to study music.

Rhonda says Trevor's diabetes has made life challenging but his decision to get a sensor gives him more independence and his family more peace of mind.

"I can leave him by himself," Rhonda says. "He doesn't have to come run errands with me. I can tell when he's going low and I can call him and tell him to eat something. It really has changed everything."

"If Nick can do it and sing and play music, then I can do it," Trevor says.