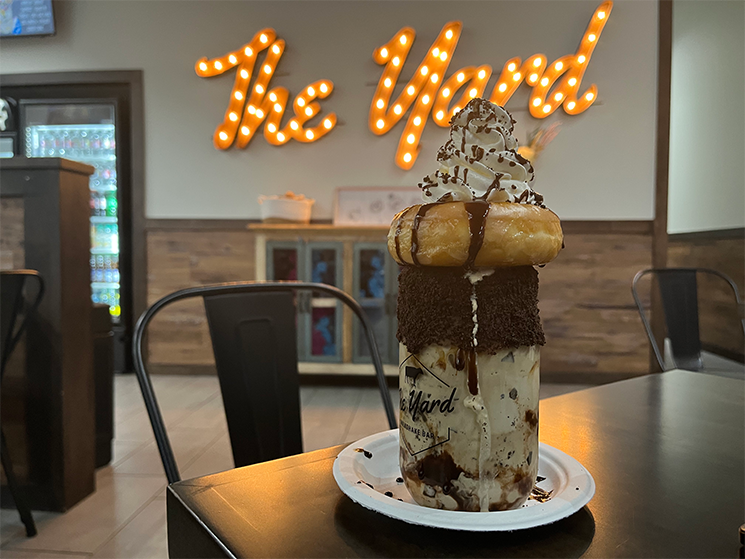 Danny Gallagher
The Doughnut Touch My Coffees and Cream milkshake from The Yard Milkshake Bar in The Colony.
The true test of a cold dessert item doesn't just lie in the dish or the taste alone. It's how it makes you feel once you've consumed it.

Say you're out for dinner and you've just finished a restaurant-style burger with a side of steak-cut fries. You're satisfied, but you're not bloated to the point where your bulging gut turns your buttons into deadly projectiles. You want something sweet to drop in the remaining crevasse of your stomach like the perfect falling-Tetris piece going for that elusive four-line clear.

May we interest you in a milkshake?

The Yard Milkshake Bar that opened in The Colony in the shadow of the Grandscape offers milkshakes in its most decadent form. The creations here look like the kind of outlandish thing death row inmates would order for a final meal.
click to enlarge

Dallas Observer writer Danny Gallagher realizes he has to eat The Yard Milkshake Bar's Doughnut Touch My Coffees and Cream milkshake without suffering shock so he can write his review.
Danny Gallagher

The dessert bar offers a variety of different dinner finishers like ice cream, edible cookie dough and sundaes in lactose-laden and vegan varieties, but as the name implies, its milkshakes are the star attraction.

Each of its specialty milkshakes is served in a pint jar with some kind of frozen liquid sweetness coated on the rim like a Candy Land margarita. Then, it's crowned with a towering set of toppings.

For instance, The Mermaid is a birthday cake ice cream shake topped with whipped cream, a stick of rock candy and a mermaid tail made out of white chocolate. The Texas Twister is a cookies and cream concoction served with an entire white chocolate-dipped cone, a tuft of cotton candy and a chocolate cow.

My trek to The Colony location started with a Double-Double and cheese fries from In-N-Out Burger (don't start with me, Whataburger bootlickers) and ended with The Yard's Doughnut Touch My Coffees and Cream ($16) with cold brew caramocha ice cream, whipped cream, chocolate syrup. The glass is rolled in crushed Oreos, and it's all topped off with a glazed doughnut.

And it's not one of those tiny gas station doughnuts sold in Fig Newton sleeves. It's a whole glazed doughnut.

The thing looks daunting to eat but you usually get more ice cream in a diner banana split. The quality, however, more than makes up for the quantity. The doughnut was fresh and fluffy and didn't taste like the stale kind that gets tossed down from bakeries when they don't sell.

The Yard Milkshake Bar in The Colony.
Danny Gallagher
The ice cream was thick, rich and creamy and could be consumed with a spoon or a straw with a wider than average circumference.

Once you're done, or as finished as you can be, the milkshake bar lets you take home what you don't finish by giving you the jar. There's even a sink so you can give it a rinse.

The Yard's concoctions are insane, but the ingredients balance and complement each other in some creative ways. And they aren't as overfilling as you'd think even though they look like something a sixth-grader would create in the kitchen without parental supervision.