10 Best Concerts of the Week: The Orbans, Ryan Bingham, Agent Orange and More 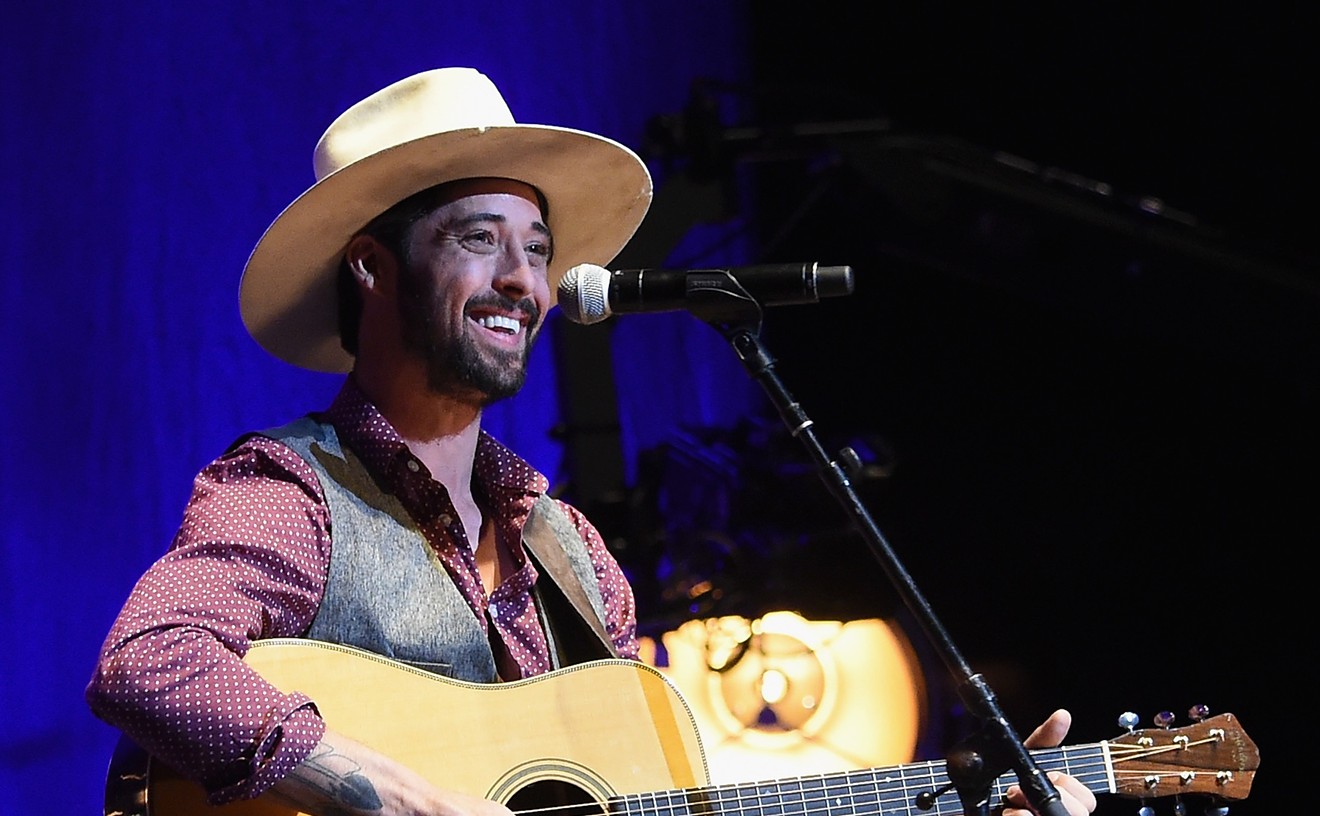 Rick Diamond/Getty
Ryan Bingham performs a solo acoustic set Saturday night at Will Rogers Auditorium in Fort Worth.
It's a week of smaller shows in North Texas, save for Oscar-winning singer-songwriter Ryan Bingham's solo performance in Fort Worth this weekend. Over half of the best concerts in North Texas are in Fort Worth this week, two of them at Tulips. The week starts off, however, with two shows in Deep Ellum with a punk rock show headlined by Authority Zero at Three Links and a little bit of dream-pop at The Studio at The Factory from Fay Webster. Local music fans will have some serious decisions to make Saturday when The Orbans make a one-night-only appearance at Main At South Side at the same time The Infamists take the stage across town at Lola's Trailer Park. Wednesday is a surprisingly busy night for live music this week with three shows in Denton, Dallas and Fort Worth from a Japanese psych band, a technical death metal band and a legendary surf-punk band, respectively. It's going to be a little crazy Thursday night, but the rest of your concert week looks like smooth sailing.
Authority Zero
7 p.m. Thursday, Feb. 3, at Three Links, 2704 Elm St., $25 at seetickets.us

Led by vocalist Jason DeVore since 1994, Arizona skate punk band Authority Zero has been going strong for just a shade under three decades, producing eight studio albums and three live, acoustic albums. The band started as a high school group that really just noodled around on their instruments until DeVore came to visit his friend and then-guitarist Jerry Douglas. When they saw how quickly DeVore could write a catchy hook, the rest was history. The band has changed often over the decades, frequently replacing members as they move on to other projects. Authority Zero released its most recent album, Ollie Ollie Oxen Free, last summer. The album was met favorably by critics for its showcasing of the band's melodic skills and upbeat tempos. Authority Zero will be supported by local bands From Parts Unknown and Phorids Thursday night at Three Links.
Faye Webster
7 p.m. Thursday, Feb. 3, at The Studio at The Factory, 2727 Canton St., $30+ at axs.com

Atlanta singer Faye Webster self-released her first album when she was 16 years old. Raised in a family of musicians — a mother who played the fiddle, a grandfather who played the bluegrass guitar and a brother who played rock — Webster would perform at open mic nights with her friends as part of a rap group. Webster has maintained a love of hip-hop throughout her music career while performing a seamless blend of alt-folk and indie-R&B for a dream-pop sound that is minimalistic in its songwriting and massive in its impact. The now 24-year-old singer released her fourth album, I Know I'm Funny Haha, last summer to universal acclaim from critics and found her way onto several year-end, best-of lists. Virginia singer-songwriter Kate Bollinger opens the show for Webster Thursday night at The Studio at The Factory.
The Infamists
6:30 p.m. Saturday, Feb. 5, at Lola's Trailer Park, 2736 W. Sixth St., $10 at prekindle.com

Weather permitting, Lola's Trailer Park is putting on such an incredible lineup of local talent, it's a shame to put just one in the heading. Denton rock band and headliner The Infamists have a reputation for putting on an incredible show and for raunchy videos and long-term bromance. Be sure to show up early, though. Patient: 0 from Fort Worth is a relatively new punk band with some classic influences, drawing from Black Flag, Minor Threat and The Ramones. Crooked Bones follow with haunted surf rock that is as mesmerizing to listen to as it is enticing to dance to. Then there is the long-standing Fort Worth punk band The Dangits, who have been keeping it going since 2009. This has all the makings of an epic night for local music. If the weather doesn't permit, the folks at Lola's will just move it inside.
The Orbans
8 p.m. Saturday, Feb. 5, at Main At South Side, 1002 S. Main St., $12 at prekindle.com

Rock band The Orbans will return for one night only this Saturday night at Main At South Side in the band's hometown of Fort Worth. The Orbans have been nearly silent since they played a run of shows back in 2014. Known for its mix of pop hooks, heavy twang and rock 'n' roll power, The Orbans' sound has been greatly missed for these last seven years. Since 2014, three-fifths of the group — guitarist Kenny Hollingsworth, drummer Jordan Elder and bassist Cliff Wright — formed Yeah Huh with former Oil Boom singer Ryan Taylor. Yeah Huh will be one of the two acts opening the show for The Orbans that night, celebrating the release of its new EP. The second opening act, McKinney singer-songwriter Ghost Cloak, will also release a new EP in conjunction with the show. No telling if The Orbans have a new release on the horizon, but this show would be a great place to be the first to know.
Ryan Bingham
8 p.m. Saturday, Feb. 5, at Will Rogers Auditorium, 3401 W. Lancaster Ave., $200+ at ticketmaster.com

Ryan Bingham had already released two critically acclaimed albums before T-Bone Burnett got a hold of him in 2009. As well-received as 2007's Mescalito and 2009's Roadhouse Sun were, both albums failed to earn the New Mexico songwriter the praise that his deeply soulful and confessional songwriting style truly deserved. All that changed with the film Crazy Heart. Bingham had a small role acting as the singer for the bowling alley backup band Tony and the Renegades, but he won an Oscar with T-Bone Burnett for writing the movie's theme song "The Weary Kind." The song also won a Satellite Award, a Critic's Choice Movie Award, a Grammy and a Golden Globe. That song, like many of the troubadour's heartfelt bawlers, is perfect for a solo acoustic performance, which is exactly what audiences will be treated to when Bingham takes the stage Saturday evening at Will Rogers Auditorium in Fort Worth.
Being As An Ocean
7 p.m. Sunday, Feb. 6, at Club Dada, 2720 Elm St., $16 at seetickets.us

California post-hardcore band Being As An Ocean first came into existence as a Christian extreme metal band called Vanguard. Though the band doesn't consider itself to be a Christian group, its members are Christians and they often write with inspiration from Christian-related topics. Regardless of the band's religious stance, Being As An Ocean is known for creating a heavy atmosphere with its music, drawing comparisons to Explosions In The Sky. Vocalist Joel Quartuccio blends spoken word with pained screams and aggressive outbursts, weaving raw emotion into the band's rich sonic tapestries. Being As An Ocean brings with it three other bands to Sunday night's show at Club Dada: Florida post-hardcore bands Capstan and Limbs as well as McKinney alt-rock band City of Auburn.
Drive-By Truckers
7 p.m. Monday, Feb. 7, at Tulips, 112 St. Louis Ave., $35 at prekindle.com

Co-founded by Patterson Hood, the son of David Hood from the highly influential Muscle Shoals Rhythm Section, Drive-By Truckers have been creating deeply meaningful Southern rock for 25 years now and have released something in just about every one of those years. In 2021, the band put out two full-length records. The Unraveling came out in January and was filled with songs of political angst, which the Truckers have dealt with quite seriously throughout their career. The New OK, which came out last October, included outtakes from The Unraveling recordings and dealt less with politics and more with personal issues (and a cover of a Ramones song). Releasing these two companion albums in a single year allowed fans to see the many sides of the Drive-By Truckers, both in terms of music and lyrics. The band's show Monday night at Tulips in Fort Worth will have opening support from Illinois singer-songwriter Ryley Walker.
Agent Orange
7 p.m. Wednesday, Feb. 9, at Tulips, 112 St. Louis Ave., $15+ at prekindle.com

One of the first bands to mix surf rock and punk rock together for a breakneck mix of speed and adrenaline, Agent Orange first got together in Placentia, California, in 1979. The band's most widely recognized and first single, "Bloodstains," came out a year later on a self-released 7-inch EP, and the song has since appeared on countless punk compilations (including the Tony Hawk Pro Skater 4 soundtrack) as the quintessential model of surf punk. As far as album production goes, Agent Orange hasn't done much of that since the band's last official album, Virtually Indestructible, came out in 1996. While there have been a couple of one-off singles, some re-recordings and re-releases, Agent Orange has stayed relevant by keeping up a consistent touring schedule, packing venues and kicking out those jams. Agent Orange will have local support Wednesday night at Tulips from The Me-Thinks and Cool Jacket.
Nile
7 p.m. Wednesday, Feb. 9, at Amplified Live, 10261 Technology Blvd. E., $25 at seetickets.us

South Carolina death metal band Nile formed in 1993 with a love for Egyptology and H.P. Lovecraft. With guitar and bass tuned to dropped A, Nile plays a style of death metal that is both technical and brutal, which makes for complex music played with a lot of aggression. While guitarist, vocalist and keyboard player Karl Sanders remains the band's only original member while over a dozen others have passed through Nile's ranks, the band has managed to put out a new album every two or three years since the release of its 1998 debut, Amongst the Catacombs of Nephren-Ka. Nile's ninth studio album and first with new bass and guitar players, Vile Nilotic Rites, was created with heavy input from each of the band's members and was well-received by metal critics for its deeper focus on the technical side of death metal. Incantation, Sanguisugabogg and I Am join Nile on its Age Of Vile Divinities Tour.
TEKE::TEKE
7 p.m. Wednesday, Feb. 9, at UNT University Union Lyceum, 1155 Union Cir., $15 at UNTuniontickets.com

Named after a Japanese myth about a ghostly female apparition that accosts train passengers left alone at the station, TEKE::TEKE is a Montreal-based, seven-piece, Japanese psych-rock band with an explosive sound and thrilling live set. TEKE::TEKE signed to the legendary indie label Kill Rock Stars and released its first album, Shirushi, last year. That album was nominated for the 2021 Polaris Music Prize, which recognizes creativity and diversity in Canadian recorded music. The band has only just recently played its first U.S. shows in Seattle, Portland and Los Angeles. TEKE::TEKE's performance Wednesday night at the Lyceum at UNT will be the fourth and last date the band will play before returning home to Canada. TEKE::TEKE is a band that creates its own musical universe and must truly be seen in order to be believed. The concert is free for UNT students with discounted prices for student guests and UNT staff.