Chris Wolfgang
Orange cardamom morning buns, kouign amanns and an orange and pistachio danish with a vanilla cream filling are just a few of the delights available from Bresnan Bread and Pastry.
January was packed  with the opening of new restaurants in Dallas, along with some closures of old Dallas favorites. This past month was not as jam-packed as January, but we have gathered 10 of our favorite openings.

February started with the opening of the sleek and sophisticated Wits Steakhouse in the Design District. The South African-inspired restaurant joins an already crowded steakhouse scene, but as Observer writer Eric Mayne says in his first look, “Once the servers get more training, Wits Steakhouse could be the South African gem we never knew we needed.”

Another Dallas steakhouse, Knife, is back open for lunch, but for the midday meal, the restaurant is a more casual concept called Knife Burger. While a bit pricey, we applaud this burger concept.

Farm + Feed opened its gaming-centric restaurant in the Shops at Legacy North in Plano. The restaurant and bar is an 8,000-square-foot space with a post-apocalyptical theme for gamers and geeks alike and has a menu designed by Riot Games’ executive chef Matt Yuen. That same day though, Eater Dallas reported on the closing of the nationally acclaimed Khao Noodle Shop in East Dallas. The Laotian restaurant called it a quits for their Dallas location, but in their farewell message, the owner said they’re not “completely gone yet.” There's more hot chicken in our future.

Two bakeries made their debuts this month. The first is Bresnan’s Bread and Pastry in McKinney. The husband and wife duo of Matt and Jenna Bresnan has been baking and taking online orders since 2020 before finally opening their small storefront on Louisiana Street. They're only open on Saturdays for now and still have a Saturday Design District pickup location, but keep an eye on their website for extended days and hours.

The second new bakeshop is the highly regarded Doughregarde, a new bakeshop inside Roundhouse Food Hall at The Village. Apart from making their own pastries, they also make bread for several other spots in The Village, including Meridian's daily bread, which if you haven't tried you should make haste. 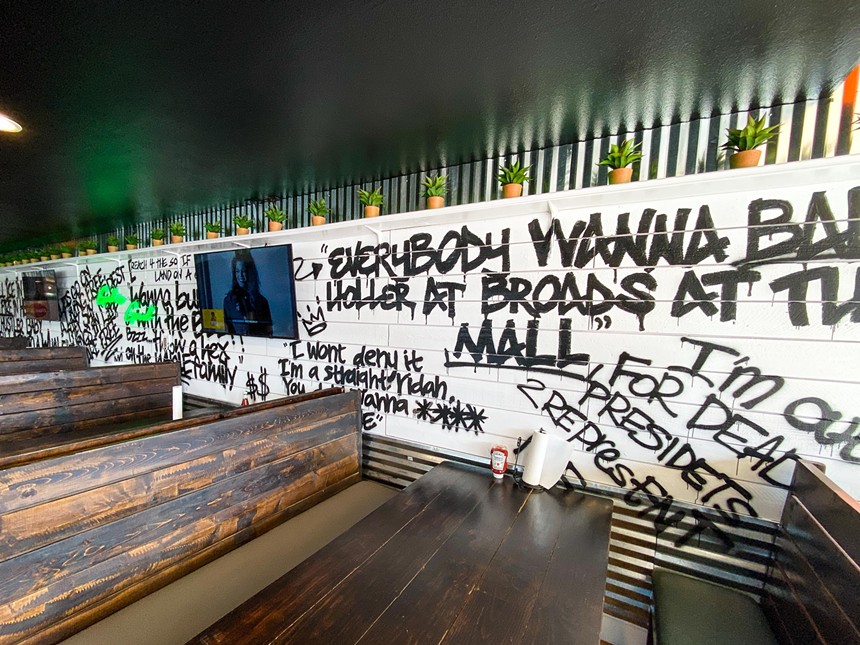 Soulful Tacos on Trinity Mills Road opened in late February.
Hank Vaughn
If you crave tacos with a side of hip-hop and rap, Soulful Tacos had its official opening on Feb. 25 in farthest North Dallas at the corner of Marsh Lane and Trinity Mills. They’re a Black-owned establishment with a Black culture-inspired interior and drinks and cocktails made with Black-owned wine and liquor brands. And good tacos to boot.

In late February, Toussaint Brasserie opened up in Downton Dallas in the Renaissance St. Elm Hotel. Named for New Orleans writer, producer and performer Allen Toussaint, the French-inspired restaurant is a classy and chic fine-dining experience that combines French and Asian flavors.

For fans of fried chicken, Nashville Hot Chicken joint Hattie B’s finally landed in Dallas. We got invited to a preopening party and the heat is no joke. Hattie B’s is family-owned, and the father-son team who runs the chain has plans to expand to Houston next year. Don't skip the sides here.

Speaking of sister locations, the American-Chinese spot Hei Hei (pronounced “hey hey”) has opened in Lake Highlands from the owners of the popular Cedar and Vine. Hei Hei is unashamed in its creative twist of Chinese food with a heavy American accent, and we highly recommend checking them out.

Finally, Chicago-themed DL Mack’s recently opened in Park Cities. While the pizza isn’t 100% authentic Chicago pizza, the Observer’s Amy Meyer says, DL Mack is worth a reservation “if you’re looking for a solid meal with a cozy upscale-tavern setting.”