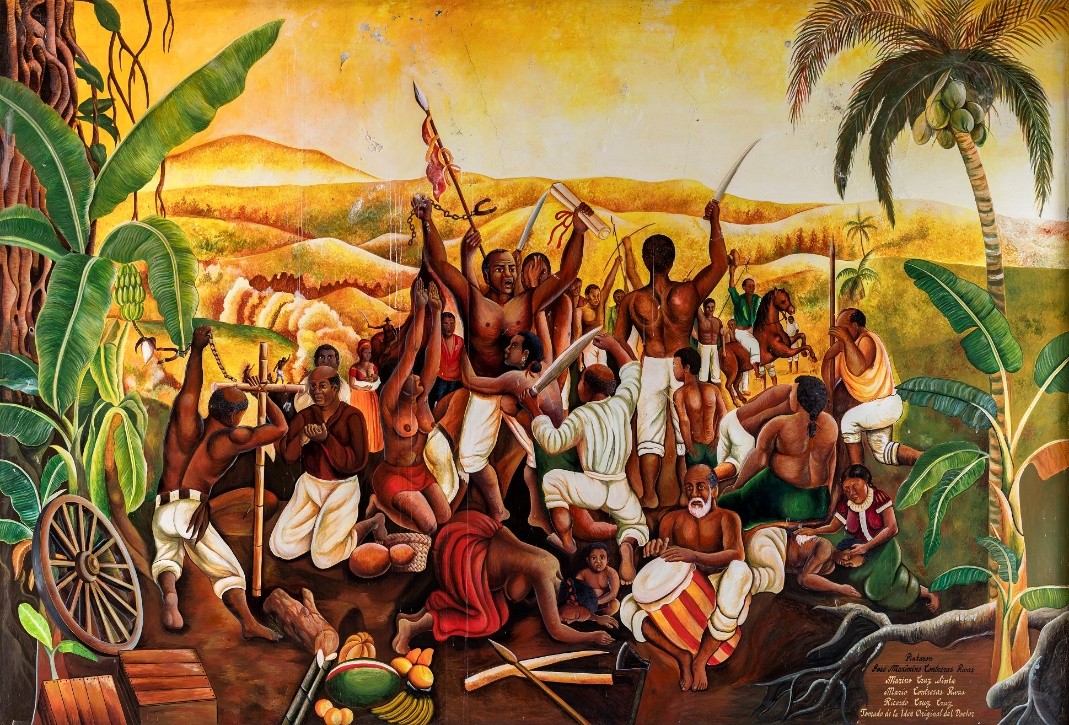 Yanga was a prince from an African royal family in Gabon. In 1570, he was taken enslaved to Veracruz, Mexico, then part of New Spain. Yanga escaped and led a group of enslaved people to revolt. They created their own colony, called San Lorenzo de los Negros, which was later renamed Yanga. The former slaves defeated the Spaniards and negotiated with the king of Spain to build one of the first freed slave communities in the Americas.

The exhibit comes from Zameer Jiwani and Jorge Baldor of Latino Arts Project. The two met through networking in the realm of art and decided to team up to tell the story of Yanga and the more than 5,000 enslaved people who escaped from Texas to Mexico in what is known as the Southern Underground Railroad. The Southern Underground Railroad evolved after Mexico banned slavery in 1829.

“We have deep issues that we're bringing into the exhibit,” Baldor says, “and that's what we're doing with Yanga. We’re talking about issues like redlining. We've got the American creed that sounds really good, you know, ‘We're all created equal,’ but you have government institutions that are marginalizing their own citizens with redlining.”

Yanga also wants to bring to light the uncomfortable truths about our founding fathers. The show will emphasize the fact that many of the figures America honors were slave owners. Jiwani says the exhibit contains documents verifying the purchase of slaves by George Washington, Thomas Jefferson and others.

“Thomas Jefferson, he wrote the Declaration of Independence,” Jiwani says. “He wrote the words, ‘We hold these truths to be self-evident, that all men are created equal,’ but during his lifetime, he owned over 600 slaves. … We have to look at the background behind where these words are coming from. We're really trying to tell those stories, but also we're trying to bring in the community to hear and tell the stories.”

Yanga includes works from several local and global Black and Latino artists, including Mario Guzman Olivares, presenting a 9-foot-wide canvas commissioned by the Latino Arts Project to reflect a rarely seen nocturnal scene including Yanga; Baltazar Castellano Melo, whose work to seek visibility for the Afro-Mexican experience was a key part in modernizing the Mexican census process to include Black heritage in the count; Kimathi Donkor, who uses symbolism and incorporates modern-day objects to expose the long-lasting effects of the African diaspora stories; and Jose Cruz Sanchez, a sixth-generation carver from Costa Chica, who carves predominantly in jicama.

The exhibit spans 1,500 square feet and showcases 40 to 50 works at a time. The works will rotate several times over the course of the next seven months.

Local arts organizations have partnered to bring additional experiences to the exhibit. On June 19, Cara Mía Theatre will stage a reading of a newly written play called Yanga. The Dallas Symphony Orchestra will present a symphony with a choral group based on the namesake’s journey on June 7.

The exhibit is free to attend. As the artists rotate, Jiwani and Baldor will film “exit interviews” with the artists as they talk about the impact of the exhibit and what they learned from their experience.

“People can come back as many times as they want and still see something new, and get a fresh perspective and be able to have these powerful conversations,” Jiwani says.

“We like to use art and culture as a way to bring people together in a way for people to find a commonality,” Baldor adds. “Once you have that common point, you can have deeper conversations about some of the issues we really need to talk about as a community.”