Frazer Harrison/Getty
The late Pantera drummer Vinnie Paul left behind a legendary mansion that was torn down a few months ago.
A local piece of heavy metal history is gone.

The owner of the 3,784-square-foot mansion in Arlington once owned and occupied by late Pantera drummer Vinnie Paul tore it down just a few months after purchasing it in February.

The empty two-story, four-bedroom, five-bathroom mansion on Hickory Valley Court went on the real estate market in early February, and a buyer scooped it up in a little over a few days, according to its Zillow listing. Paul died in 2018 at 54 from a heart condition in his other home in Las Vegas.

"Absolutely gut wrenching and heartbreaking," wrote former deejay Derek "D-Rock" Walker on a Facebook post with two photos of the remaining rubble that's since been taken down from the web. "This is what remains of the monument that was Vinnie Paul's home in Arlington, Texas. This was not only a heavy metal landmark but a staple in Pantera's rock and roll legacy." 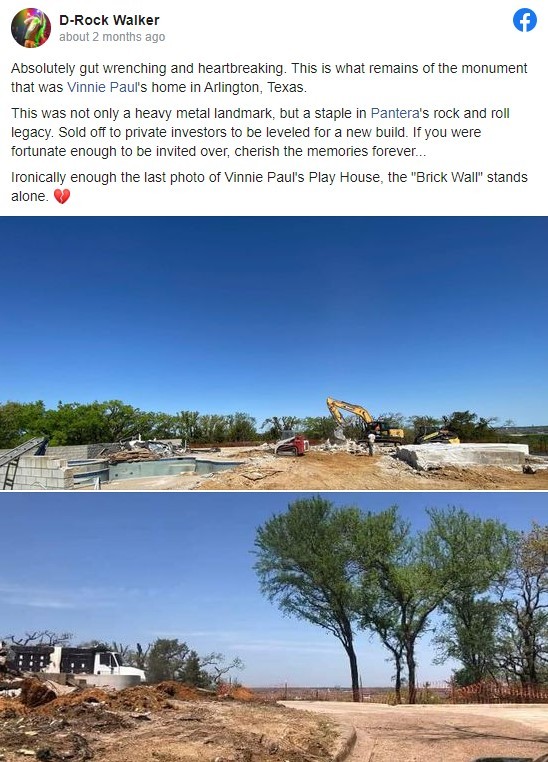 Screenshot from Facebook
According to Walker's post, Paul's former home was purchased by "private investors" to make way for a new building.

The announcement of the house's for-sale sign in February prompted a plan from Avenged Sevenfold singer M. Shadows to buy the house through an independent collective funded by NFTs. Shadows laid out his plans on his Twitter page.

"This is the place where any musician that came through Dallas would come after a long night at Vinnies [sic] famous strip club or after the shows," Shadows posted. "Musicians, actors ... you name it ... It was like the 'Graceland of Heavy Metal.' We have been many times. So [Avenged Sevenfold guitarist Zack Vengeance] suggested a DAO [decentralized autonomous organization] purchase of it."

The mansion is just one of many parts of Paul's estate that have gone up for sale. An estate auction of Paul's belongings is underway through Backstage Auctions and closes on Sunday. The auction's catalog includes several drum kits from Paul's performing days with bands Pantera, Damageplan and Hellyeah and his guitar collection, including a vintage axe owned by Paul's late brother and Pantera bandmate "Dimebag" Darrell.

Paul's Arlington home holds a significant place in Pantera's heavy metal legacy. The house was built to be a party spot with features like a rotating wall that housed a secret sex play room, space for hot tubs and a pool and a safe room. Paul hosted huge parties for sporting events like the Super Bowl and the Dallas Stars' Stanley Cup win in 1999, with members of the team and the fabled trophy.
Paul told the metal blog Loudwire in an interview for its "Wikipedia Fact or Fiction" column that during the early morning hours of a huge celebration party in which Paul packed his house with strippers and cases of Crown Royal whisky, Stars Center Guy Carbonneau grabbed the Stanley Cup trophy and yelled at defenseman Craig Ludwig from a second story balcony, "Hey Luddy! Catch the cup!" Then Carbonneau tossed the huge silver trophy off the balcony where it landed on the side of Paul's swimming pool, leaving a huge dent. Members of the party including Paul jumped in the pool and sank it to the bottom. Paul says the cup's keeper told him, "You cannot do that. That's the Stanley Cup!'' And, Paul added: "And we're like, 'We just fucking did it dude!' It was pretty awesome man."

Paul spent a lot of time in his house grieving after his brother Dimebag died in 2004 from a shooting in a Ohio club committed by a crazed fan. He spent the following year in his house and away from the drums, only leaving to grab drinks at his all-nude strip club The Clubhouse. He returned to the drums in 2005 at a tribute concert for Drowning Pool and formed the new group Hellyeah with names like Mudvayne singer Chad Gray and Nothingface guitarist Tom Maxwell. They recorded six albums and toured until Paul's death.