Dayne's Craft Barbecue is On the Move, Headed Home

Sean Welch
A spread of Dayne's Craft Barbecue, which you can get starting this Friday in the Westland neighborhood of Fort Worth.
Fans of Lola’s Trailer Park in Fort Worth and its side-hustle barbecue pop-up, Dayne's Craft Barbecue, have received two bits of bad news recently. Not only is the popular live music bar relocating, but the pair are splitting up (albeit amicably). No worries though; both will reopen soon.

Dayne’s brisket smashburger has ascended to the top of many notable lists in DFW, including the Observer's, and their barbecue made it onto the most important list: Texas Monthly's Top 50 Barbecue Joints.

Most striking is how fame came just four years after this venture started. Founder Dayne Weaver began smoking meats on a converted hand-me-down kettle he inherited from his father-in-law. He quickly became hooked, and his hobby flourished. With some social media savvy, his first front-yard pop-up sold out within an hour.

After that smoking hot start, Dayne's settled into Lola's. Originally, they were expected to make the move with Lola’s to TCU land, but then things — as they often do — changed. Phillip Murrin of River Ranch Stockyards partnered with Dayne’s team, and now they will open their own brick-and-mortar. 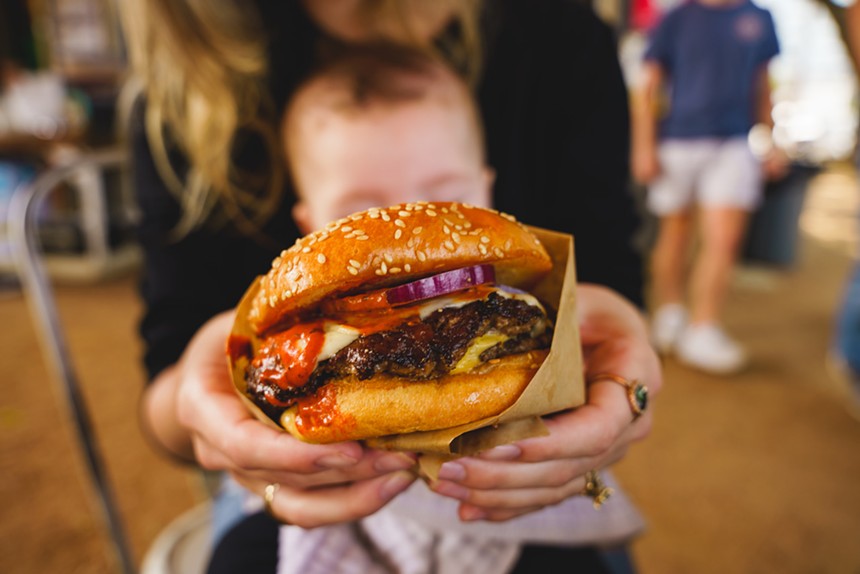 Dayne's smashbrugers are legend.
Sean Welch
“We will always be grateful for the Lola’s crew and how they helped us get to where we are now,” said Ashley Weaver, co-owner of Dayne's. “We love them and truly consider them a part of our family. As excited as we are for this new adventure, it’s still hard to leave.”

Starting Friday, June 24, Dayne's trailer will be parked conveniently next to their soon-to-be permanent home at 9808 Camp Bowie W. Blvd. in the Westland area of Fort Worth. The renovation of the brick-and-mortar should be complete in the fall at 9840 Camp Bowie W. Blvd.

Murrin and his family are deeply rooted in Westland and this move is one of many focused on rebuilding and bringing people back into the community. “Our goal is to not only provide more dining options for local residents but also to the multitude of people that drive by every day,” Murrin said of the new location.

If you're hungry now, check them out starting this Friday at their trailer on Camp Bowie.