Event producer Jared Guynes, best known for his '90s Ninja Turtles pizza party with rapper Vanilla Ice in 2013 and his annual Epic Blaster Battle, has some big plans for his massive Nerf gun fight, which returns this Saturday. And they'd have to be pretty big, since the first one set a Guinness World Record.

"I've just been steadily increasing the quality and value of the event," Guynes says. "Every year, I add something more."

This year, he's invested in trailers, tents, 50,000 foam darts and even his own graphics, which will be displayed on AT&T Stadium's massive 160-foot-wide TV that hangs from the roof. He's also added a second Epic Blaster Battle to his schedule, but it won't be in Dallas. He's taking the blaster battle on the road to Los Angeles.

The seventh blaster battle will happen this Saturday, June 25, at AT&T Stadium in Arlington, and it's already sold out. Next Saturday, he'll fly to California for his first Epic Blaster Battle outside of Dallas city limits, at Sofi Stadium in Inglewood. Next year, he's working to add a third city to his roster with an event at the Mercedes-Benz Stadium in Atlanta.

It's just the beginning in Guynes' master plan to take his Blaster Battle on a tour of the National Football League's 10 domed stadiums, including Houston's NRG Stadium, Detroit's Ford Field and New Orleans' Caesars Superdome.

"I accidentally created this whole thing," Guynes says. "Now here we are, and it's not even just doing the event. It's gotta be that proof that we can do it and the sky's the limit. It could be an international event. Somebody reached out and said there's a viable market in Singapore or the Toyko Dome in Japan that they used for the Olympics."

The first battle dubbed Jared's Epic NERF Battle in 2013 started as an attempt to set a world record for the largest NERF gun fight. Since then, the event has surpassed its own record several times, to the point at which the count stopped in 2016 when 2,289 people set the last record that still stands, according to Guinness Records.

The coronavirus pandemic happened just a few days before the fifth incarnation of the event in 2020 and delayed the Blaster Battle. So the following year, Guynes held the fifth and sixth blaster battles in AT&T Stadium to make up for the time. 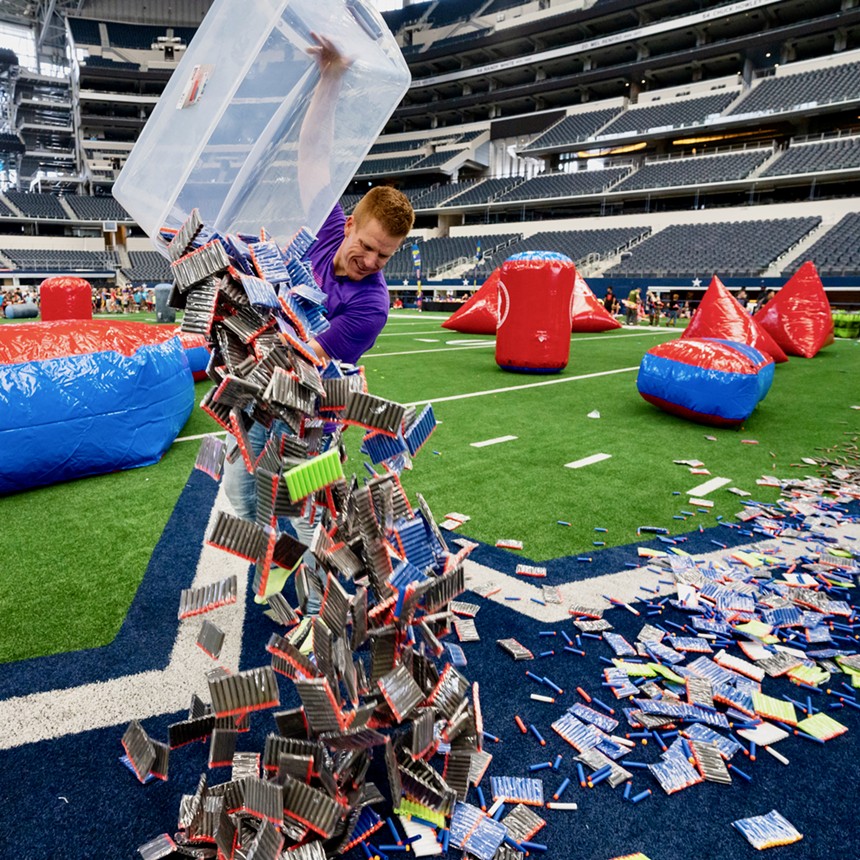 Blaster Battle event creator Jared Guynes dumps out a free batch of foam dart guns for Jared's Epic Blaster Battle 5 at AT&T Stadium.
Michael Cariaga Photography
The opening of Sofi Stadium in 2020 for the newly returning Los Angeles Rams presented Guynes with a chance to expand his aim. Guynes and his Blaster Battle have become so well known that the event gets a mention on stadium tours. So when the L.A. stadium opened and several Dallas Cowboys employees transferred to the new venue, word out of mouth spread in California about Guyes' event.

Guynes says he got the call of approval for his L.A. event just six weeks before they wanted to do it. And he knew it would have be bigger.

"I've always had four to six months to build and promote an event," Guynes says. "I said forget it, let's do it in typical Jared fashion."

The event had already sold more than half of its capacity by the time he started planning it, which involved countless steps for promotion like sending VIP invitations to household names in the NERF community. One of them is Michael Pick, who beat celebrity engineer Mark Robler's record for the World's Largest NERF gun, and who will be at this Saturday's event. Even something as simple as putting graphics on Sofi Stadium's largest 4K screen required thousands of dollars and extensive planning.

"I can't even begin to approach the graphics for this thing without special software, and when I got to the cost to turn on the screen, I could either buy a new car or turn on the screen," Guynes says. "I said I don't need a new car, let's turn on the screen. If I'm an attendee and I come into the event, I don't want to just look at a giant paperweight hanging from the ceiling."

Maximizing the look and feel of the event is always key for Guynes. He has to go as big as he can.

"They always get a kick out of it," Guynes says of attendees. "It's never not humbling for a kid to come up and ask me to autograph their toy or a shirt. It's always exciting."