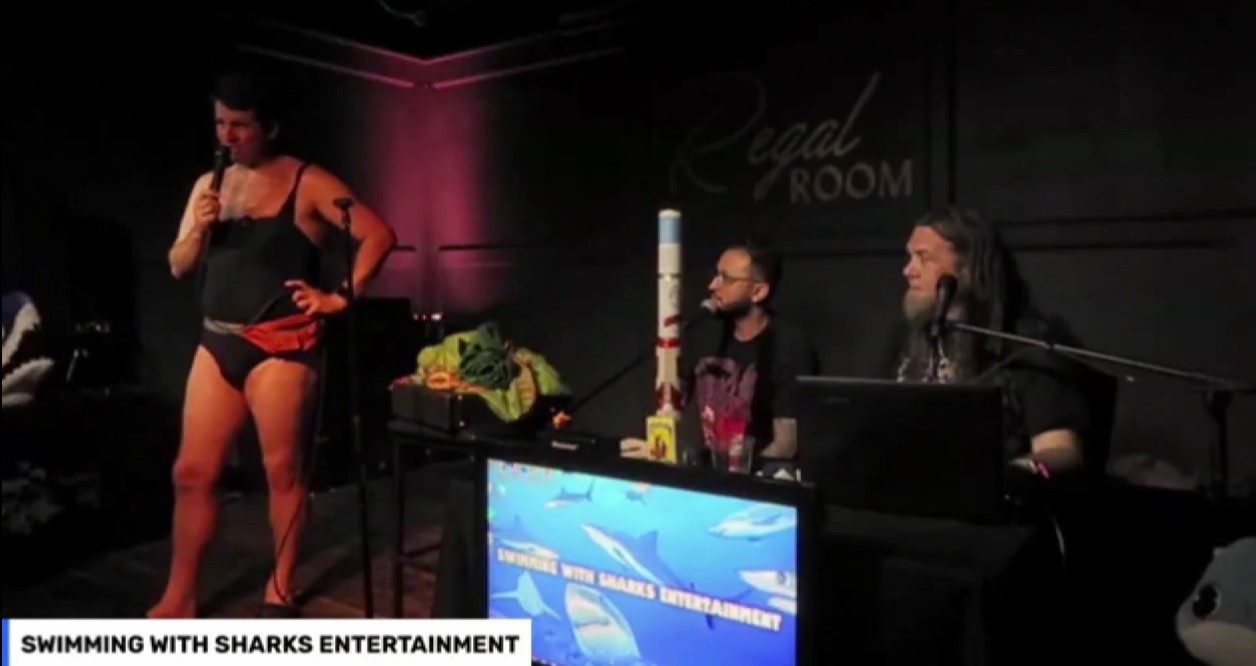 Screenshot from YouTube
A show booked by comedian Noah "Shark" Robertson, right, got a noticeable amount of backlash when Alex Stein was put on the bill.
Last week, comedian and show producer Noah "Shark" Robertson announced on his Facebook page that he had booked conservative comedian and self-described troll Alex Stein as part of a lineup for one of his Swimming with Sharks Entertainment stand-up showcases at the Dallas Comedy Club.

The comment section of the initial post and Robertson's subsequent posts prompted major discussion. Many comedy fans were outraged, while a group of commenters maintained that comedy shouldn't be afraid to offend and should give people like Stein a chance to perform.

"Comedy is suppose [sic] to be offensive and has been since the dawn of time," wrote Nick Truskowski in the comments of Robertson's post. "People need to stop being so fucking hurt by everything."

The other side thought comedians like Stein shouldn't be given a platform to make jokes about punching down on groups like transgender people and topics like COVID vaccines and precautions.

"You put Alex Stein on your show," wrote comedian Raye Maddox. "A man who uses his platform to spread hate and misinformation, which is info easily accessed. You don't need to do research on all your comics but that doesn't excuse your choice to book him."

There's good reason Stein evokes such polarizing reactions. He's built a career in comedy through a series of viral videos in which he speaks during the open comments portion of city council meetings. In a Plano meeting this year, he rapped about vaccines and Russia's unlawful invasion of the Ukraine. During a recent Denton City Council meeting, Stein stepped to the mic wearing a muumuu and a head wrap while screaming about having access to safe abortions because, he said "I want to kill the clump of cells in my uterus" and "I get raped all the time."

In June, Stein protested outside the Mr. Misster Lounge in Dallas during a weekend Pride show for families. He claimed in videos that he was being discriminated against when the owners wouldn't let him in for being a loud nuisance and followed one performer, haranguing her with questions about "exploiting little children" in a post on his Twitter page.

"I'm not really sure if I would book him again," Robertson says. "I like him. I think he's cool and a funny guy, but after all the controversy surrounding him, booking him seems like a bad idea. I want him to succeed like anyone else would succeed, but I don't want to be associated with nefarious characters."

The backlash to Stein's presence came just a few days after he went viral for filming himself catcalling U.S. Rep. Alexandria Ocasio-Cortez. Stein yelled that AOC was his "favorite big-booty Latina" on the steps of the U.S. Capitol.

"He says some stuff that's hard to get behind or laugh at or support sometimes," Robertson says. "I think at the end of the day, he has a good heart but he's going for shock and awe."

Robertson later announced that after talking with the club's operators he would move the show to another venue. The show ended up playing to a packed house at the Will Call Bar in Deep Ellum, just down the street from the Dallas Comedy Club. Representatives for the Dallas Comedy Club did not respond to our requests for comment.

Stein's set leans hard into the controversial topics he tackles in his trolling videos, which made him a right-wing comedy star. He stepped on the stage at Will Call in the same muumuu and hat he wore at the Denton City Council meeting to "protest" the Supreme Court and Gov. Greg Abbott's limitations on abortion, while claiming to be transgender.

"I cut my penis off for y'all," Stein said. "I'm willing to tuck this thing all day long just to come up here and perform, just to check the right boxes because in this day and age, if you're not trans, you're a bigot. You're a racist."  During the opening of his set, he evoked the name of transgender collegiate swimmer Lia Thomas and announced he's going to become a college swimmer. Stein then removed the muumuu to reveal that he was wearing a women's bathing suit underneath.

"They like to cancel me because I like to jam the most absurd parts of our culture into people's faces," Stein said in his set. "So they see how weird the world is."

Comedian and Stomping Ground Comedy Theatre producer David Parsons, who books a monthly showcase called Stand-Up Sampler and a variety show called Baudy Naughty Vaudeville that features local comics, says vetting is an important part of his booking process. He spends his time prepping by becoming "as aware of the local comedy scenes as possible" by going to open mics and showcases to perform and stick around to spot new talent that might be a good fit for his shows.

Parsons says he also examines a comedian's online presence to get a sense of the person and see more material that he can work with for his shows.

"It's not about discriminating viewpoints," Parsons says. "It's about choosing people who align with our values. I'm not a person who thinks comics should stay away from touchy subjects, but you have to handle them with a certain deftness and there are lines that should not be crossed. You have to be very diligent to make sure you don't get someone who's not of your value set."

Robertson says he met Stein in April when he booked Stein at the Dallas Comedy Club. He describes Stein as a nice, generous person off-stage who likes to push boundaries for his audiences. Robertson says he's not aware of Stein's politics outside of his shows.

Parsons says he wouldn't have booked Stein because beyond producing a funny show for the audience, bookers need to provide a safe place for comedians on and off the stage.

"If somebody told me you better book this Alex Stein and I looked around and just Googled the guy's name, there's no way," Parsons says. "It's pretty easy. Some people might be a closer call. The tricky part is not only do I want to know what content people are going to have, I want to know how they are to work with. I don't want anyone who comes into my organization to be abusive or mean to other people in the show."