Mango Mango Dessert in Carrollton is a franchise cafe that prides itself on offering healthy alternatives to fruit teas. But some say the franchise does not provide a healthy work environment.

@bakugousweatglandss Hi ! This place is called mango mangos in carrollton. I was previously an employee here and recently got sick which led me to ask for leave. Upon this they witheld my check. When I brought the ssn card they asked me to bring that day the guy in the video told me ‘ we need a copy ‘ though I was told to bring in the real card by jenny. Theyre just doing whatever they can to not pay me like they have done to several others. Pls help. Pls repost this video && report them for going against the child labor laws #greenscreenvideo #kpop #kpopfyp #kpopers #boba #Inverted #storytime #toxic #work #badmanagers #badbusiness #toxicjob #toxicjobcheck #storytimevideos #storytimestiktok #kpopfypシ #carrolltontx #carrolltontexas #dfwkpop #dfwkpopstan #kpopstore #bakery #badbussiness #blm #discrimination #discriminationawareness ♬ original sound - Qui(Kai) 🦋

The incident occurred July 14 when Perry attempted to collect her first and only paycheck for 63 hours of work from the eatery. She had been an employee since May 30. Perry says the job created financial strain.

“I was having people spend up to $80 a week to send me an Uber to get to a place that wasn't paying me,” Perry says. Her family helped her get to work when they weren't able to take her or pick her up.

Perry resigned on June 25. Since then, she had been in conversation with Mango Mango owner Jay Guan and manager Han about payment. She says Guan refused to pay Perry until she brought him a W-4 tax form and a copy of her Social Security number. 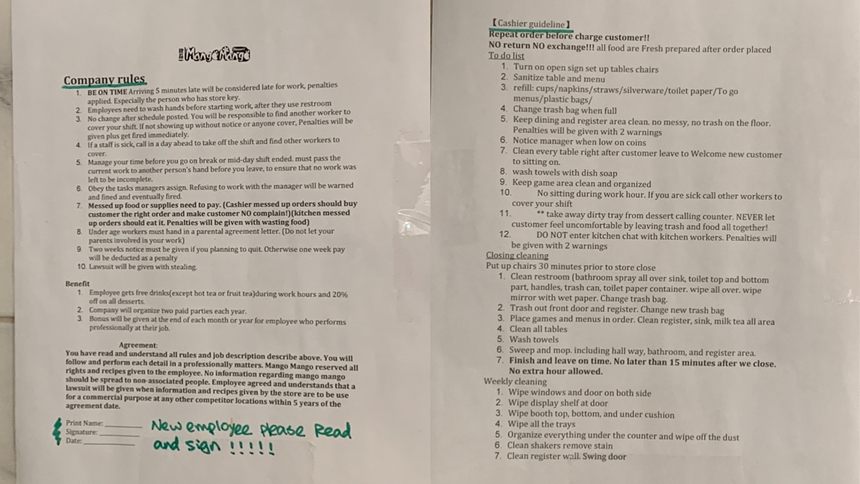 Mango Mango's "Company rules" as posted inside the store.
Qui Perry
Perry alleges that withholding pay or inaccurately paying minors is standard practice for the franchise, along with a list of "Company rules" full of warnings of fines and penalties, that employees are required to sign. According to these rules, underage workers must “not let their parents get involved in their work.”

Additionally, the company rules state that if an employee does not give a two weeks' notice when resigning, one week of pay will be withheld. Also, cashiers are not allowed to "enter kitchen chat with kitchen workers or penalties will be given."

“If you do get your parents involved, then they'll just call the police,” former Mango Mango employee Alondra Ramirez says. “I never wanted my parents to go through something like that so I never made it a big deal. I just kept everything to myself.”

Perry says an employment ad on Indeed stated the pay was $15 per hour, but both Ramirez and Perry say they never received a pay stub. They are unaware of how much was taken out for tax purposes.

On July 14, Han called the police after Perry showed up with her grandmother to collect her paycheck. She had brought her Social Security card, which Guan asked for only after Perry resigned and requested payment. Guan told her they didn't have a copy machine, so she would have to make a copy and bring it back. Perry says Guan also told her she had to get her own W-4 and bring it to them instead of providing one for her.

Negative Google reviews cite employees preparing the restaurant for closing 30 minutes prior to closing and a refusal to refund incorrect orders, which are both in alignment with company policy per documents shown in photos obtained by the Observer. Errors must be paid out of pocket by employees, which Ramirez has done.

Failure to adhere to these rules or anything assigned by the managers (Guan and Han) results in a warning, fine and eventual firing, according to company policy.

After the July 14 video went viral, Mango Mango apologized on July 20 via Instagram.

Through social media, eight other minors have come forward with similar experiences. In response, Perry organized a protest on July 23 outside of Mango Mango to raise awareness.

“I don’t know what they want from this,” Guan told the Observer during the protest. He refused to comment further. Follow-up questions to Guan were unanswered.

Carrollton mayor Steve Babick arrived at the protest in an effort to mediate between Perry and Mango Mango. Guan then paid Perry. Babick, who learned about the situation via social media, called it an “unfortunate series of events.”

However, Perry says she is not done. She plans to continue to protest. She aims to raise awareness about workplace difficulties minors face.

“We put our trust into adults, but we got hurt by the adults in the process,” Perry says. “I'm hoping that I can get adults to see that kids go through problems, too, especially in workplaces.”