Blink-182 Is the Tip of the Iceberg: Here Are the Most Expensive Concerts in History 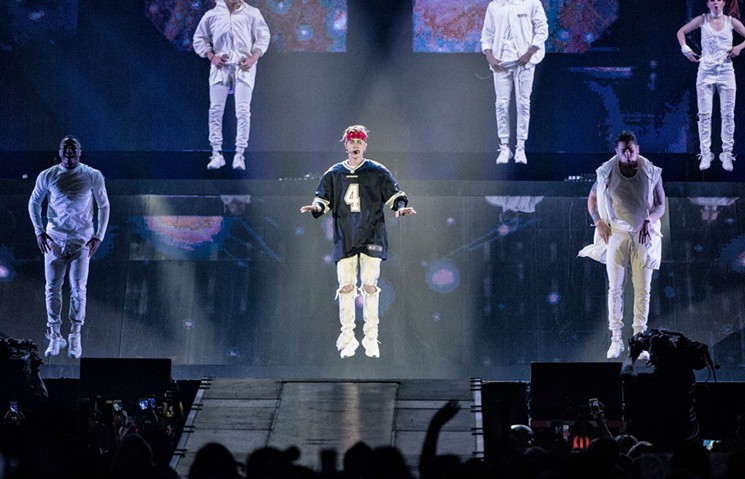 Mike Brooks
It's not just Blink: Justin Bieber also wants to take your entire rent payment.
Everyone has a dream concert for which they’d be willing to risk life and limb for some seats. Maybe you want to see Paul McCartney while he’s still touring, or perhaps you’d be first in line to see Childish Gambino or Adele should one of them happen to stop by your area. In the wake of COVID-19 shutdowns, eager concert-goers were reminded of the unique collective experience of being in a packed venue. There’s nothing quite like sweating, sobbing, bleeding and singing along with a massive crowd of strangers.

Of course, you’re generally required to pay a pretty hefty fee to get into some of the most in-demand concerts. Blink-182 fans went from ecstatic to outraged this week when they got the chance to look at the band’s upcoming world reunion tour scheduled for 2023–24. Following the release of the new track “Edging,” with old member Tom DeLonge, the band’s site listed tickets ranging from $200 for a floor seat to $600 for a pit ticket. How much are you willing to pay for your 1990s nostalgia?

Blink-182 aren’t the first artists in recent years who have asked for outrageous fees for a major tour. A recent My Chemical Romance tour had seats that started off around the $160 range and only grew larger if you wanted to get up close and personal. “Welcome to the Black Parade?” More like “Welcome to the Broke Parade.”

Outrageous ticket prices are nothing new. We looked back at some of the craziest concert ticket prices in history, and considered whether the inflated cost was even worth it.

Elton John, Farewell Yellow Brick Road Tour 2022
Elton John’s celebratory farewell tour was temporarily postponed due to COVID-19 and John's own health issues. However, the legendary icon decided to thrust himself into the spotlight once more for a world tour where you’d have to drop at least $150 to get into a broom closet at the back of the stadium. Those interested in a resale seat near the stage could find some seats listed at more than $2,000.

Justin Bieber, Purpose Tour 2022
The teen heartthrob of the 21st century stopped by India in 2017 for a packed concert following a series of public controversies. If you converted the Indian tickets at the highest tier to U.S. dollars, the price comes out to around $1,000. Alternatively, you could just watch Justin Bieber: Never Say Never on Amazon Prime for $5.99.

Lady Gaga, 2019 Tour
Lady Gaga’s tickets have always been outrageous, but it’s safe to say that she was at her peak in 2019 following the success of the Joanne World Tour and her Academy Award win for Best Original Song for “Shallow” from A Star Is Born. An average ticket (not a floor seat) was estimated to be north of $400. Anything closer? You’d probably have to mortgage your house.

Led Zeppelin, 2007 London Reunion
When Led Zeppelin announced their first reunion concert in 27 years, it was likely that tickets priced at $250 would sell out before the levee broke. Is Led Zeppelin the greatest band of all time? One fan certainly thought so, because he paid over $168,000 for a seat. We’ll let this one slide, because it was at least done in the spirit of charity.

Bruce Springsteen, Springsteen and E Street Band 2023 Tour
The latest world tour from “The Boss” courted some controversy after New Jersey Congressman Bill Pascrell Jr. made a public declaration about the monopoly on ticket prices. Pascrell called for an inquiry “to help fans better understand the frustratingly opaque process that leads to such high prices” after some concert ticket prices soared over $5,000.

The Rolling Stones, MGM Grand Garden Arena in Las Vegas 2013
It’s pretty incredible that after more than 50 years of nonstop performing, the Rolling Stones continue to top lists of the most expensive concert seats. An average Rolling Stones ticket is bound to cost over $600 in most secondary markets, but the band's 2013 Vegas visit was estimated at over $1,000 for some seats. Mick Jagger is still rocking out at 79 years old, perhaps proving that his flamboyant lifestyle is healthier than we thought.

The Eagles, 2018 North American Tour
“Take it easy?” According to Forbes, The Eagles took the title of 2018’s most in-demand ticket despite not having a No. 1 album in years. The average ticket price was $238, according to Forbes. So how did they manage to top younger artists like Harry Styles, Taylor Swift and Ed Sheeran? According to TickPick’s Jack Slingland, The Eagles generally inspired an older fanbase with more disposable income.

Adele, 21 Tour (2017)
Is there anything Adele can’t do? You’d have to be pretty wealthy to find out. Tickets for her shows following the highly acclaimed album 21 were known to have sold out in minutes, and TickPick estimated that her fans were willing to pay an average of $400. Cue the “Rolling in the Debt” parodies of “Rolling in the Deep.”

One Direction, Take Me Home Tour (2013)
Has Harry Styles been in the news at all lately? If you’re still wading through the Don’t Worry Darling controversy, you might be interested to know that Styles saw a healthy audience turn out for his participation in One Direction’s Take Me Home Tour. After tickets for the 25-city concert sold out quickly at prices averaging $450, some fans dropped $1,000 for VIP access. Was Olivia Wilde one of them? That’s a question to which we’d like to know the answer.

Beyoncé, Mrs. Carter Show World Tour (2013)
Here’s a bit of trivia for you: Beyonce is one of the rare performers who has enjoyed one of the highest-selling tours of all time (the 2013 Mrs. Carter Show) and one of the 10 highest-grossing films of all-time (2019’s remake of The Lion King). While you can check out The Lion King for free on Disney+, average ticket prices for the world tour reached almost $700. If you think that’s bad, just check out how much the VIP experience for Beyonce and Jay-Z’s tour cost. If you wanted to upgrade to the “Runway VIP experience,” you’d be almost $2,000 poorer.