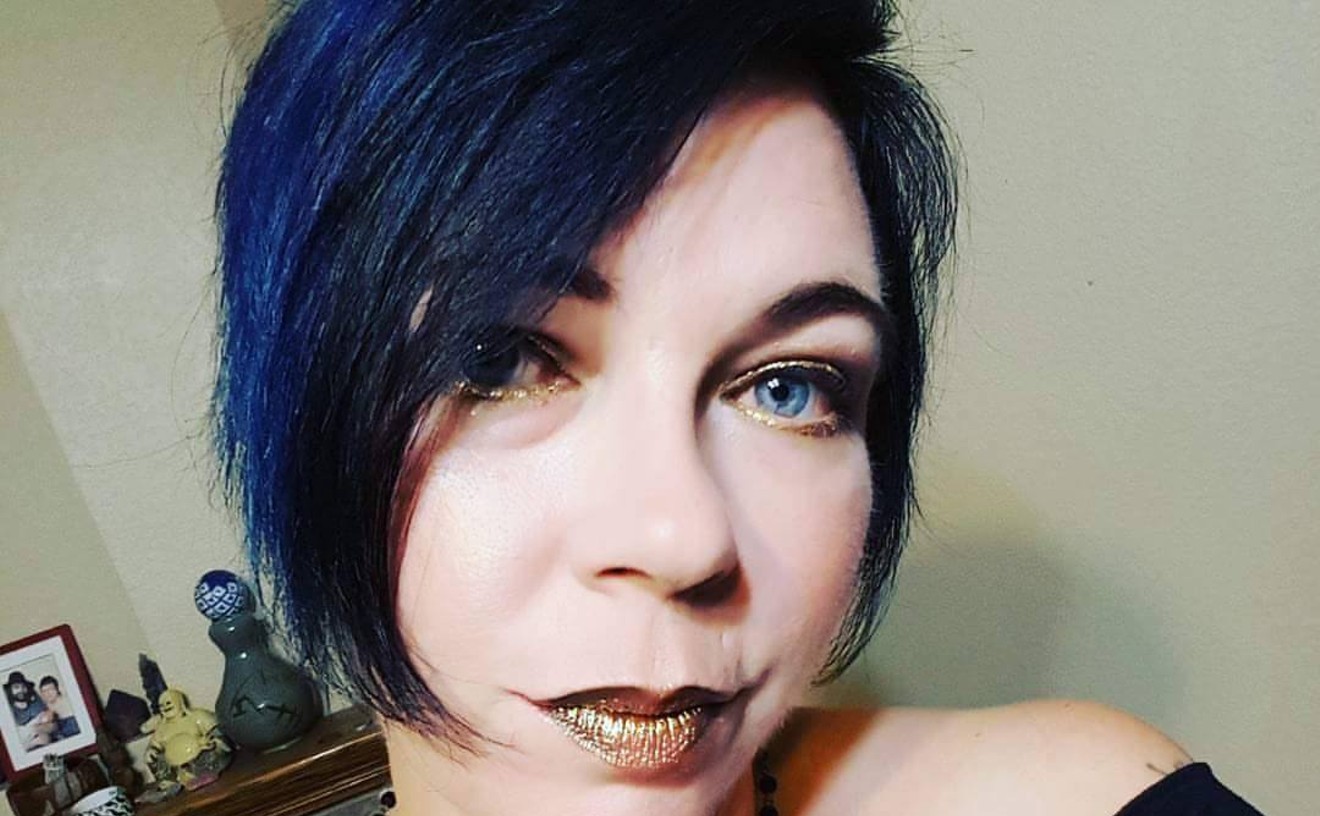 Cyberina Flux
Cyberina Flux invades the mixtape.
For 15 years Cyberina Flux was the reliable voice from the underground on KNON’s Rocket Radio show. There, she pushed the envelope for radio in Dallas and gave an on-air presence to some of the fringiest electronic music and rock. For this week’s mixtape she brings an eclectic mix ranging from Radiohead to Berlin techno queen Ellen Allien.


Dallas Observer: How did you get started deejaying?
Cyberina Flux: I was working as an editor for a long gone online goth music zine, and hanging out quite a bit in the rave scene, and people just started asking me to play. ... At first, I turned gigs down because I didn’t know how to mix, but people kept insisting anyway. ... Radio came to be the first gig I actually accepted.

DJ Stereotype, RIP, wrote me in response to a lengthy soapbox rant I made in a guitars vs. electronics debate on a message board in 1998. I spoke about how rare it is in human history for an entirely new class of instruments to be born. I went on about how exciting it is be alive in a time where an entirely new medium is being embraced worldwide, and how neat it is to see all of the creative inspiration that comes with new discovery. I said that just because we have a shiny, bleepy, spacey new toy, we shouldn’t abandon everything we’ve always loved. Make new friends, but keep the old ...

He asked me to visit his radio show on KNON, The Grey Zone, and he kept asking me back until he asked me to officially join the show. I still kept trying to turn down party gigs ... but DJ Stereotype encouraged me to go ahead and take them anyway, and loaned me a DJ mixer.

I played a couple of larger parties, but my first legitimate club gig was at Numbers Night Club in Houston for the goth night, Underworld. They were having a new music night, and I was booked to come down and play entirely unsigned artists on behalf of the music zine. The gigs just kept coming … I actually wound up learning how to mix live in clubs with dance floors full of people in that first year.

How was this mix made? Is there a particular theme for the track selection?
These days, I tend to build sets around a particular song, so the song came first.  I found myself recently playing and replaying “Ribbon on a Branch” by Younger Brother, and it just so happened to be the track I signed off of Rocket Radio with, so it seemed appropriate to start this mix with it.

I also had a good idea of a last track that I wanted to play: “Wrestler” by Does It Offend You, Yeah? It’s [completely] different in style from the opening track, and it just feels so appropriate to the times right now, in a darkly comedic way. ... I wanted to see if I could successfully make it from one end of the spectrum to the other in an hour.

From there, I flipped through my music to find things that matched tempo, key and much more loosely by style. I pulled four hours of music, and locked myself in a room with supernice Pioner CDJ-2000NXS2s, a DJM mixer, a Tascam digital recorder that I borrowed from Showtech Productions, my headphones, a pad of paper, a PA, someone else’s cat, a start point and an end point, and then I focused on the maze between.

What is your relationship with Dallas DJ Culture?
It’s definitely changed over time. I was all up in it, in every direction possible, as a diehard club kid in my early 20s. As I started to take on more responsibilities, I lessened the club life, but I still gigged a lot, and more importantly, I spent over 15 years regularly spending time in a quiet radio studio with just about every DJ and producer I could find.

There’s really something to be said about the conversations one can have about DJ culture and music when you’re talking to the people who make and mix the tunes, and you’re face to face, outside of the bangin’ loud club. Some I got to know well, some not so much ...

When I had my son, I took a good, long pause from club life in all senses, and the middle of the night radio slot was a bit much to manage with an early waking toddler, so there were a couple of years of total hiatus. He’s no longer a baby, and I make it out a once or twice a month again now.

All the way through, I would DJ at regional burn events as well, which really helped me quite a lot to keep fulfilling my passion for sharing music with people while my own personal lifestyle changed. ... Burn events not only kept me connected to people I’d worked with for over a decade, but gave me new connections with other DJs I might not have otherwise met in my new motherhood phase.

How has deejaying changed for you since leaving radio?
The new people that I meet have started asking me what genre I play. I never quite know how to answer that question anymore. This mix, for example, has as many genres as it does tracks. I used to just tell people how to tune into Rocket Radio. I don’t readily have examples anymore, and I’ve never really recorded many mixes.

I used to be able to walk into a club night and be able to tell you exactly the favorite song of at least 25 percent of the people there. I could fill an hour of radio with songs I knew people would request. I’d bring in a mass of music, and just wing it. These days, I tend to bring much less music to any given gig, and I build sets around a very specific track that I just absolutely want that audience to hear.


"I could fill an hour of radio with songs I knew people would request."

Every set I play is geared towards the audience I’m playing for. Doing fewer sets in general gives me a lot more time to consider what I’m putting into each one, and the more time passes without doing the radio show, the more I find specific subgenres to be restrictive and a little on the elitist leaning side. And I firmly believe that elitism is for followers.

What’s your favorite music experience of the past year?
I had an absolute blast playing a gig last May. It was probably one of my lifetime most fun sets. I was on an absolutely phenomenally equipped and aesthetically beautiful stage my friends had built at a regional burn.

A little known fact about me is that I have played classical and jazz upright bass for three quarters of my life. I wanted to build a dance set that was based on the jazz I most loved to play as a bassist, and remixes of my favorite standards, and I built my selections around an electroswing cover of They Might Be Giants’ “Istanbul Not Constantinople” by Milan and Phoenix. I had a huge crowd with literally three generations of people outside, yet on a technologically awe-inspiring floor, dancing their hearts out, hooting and hollering.

What gigs do you have coming up?
On Feb. 18, I’m hosting Karneval die Flux at The Nines, but I didn’t book myself to DJ. I’m celebrating my 40th birthday, and I filled the time with some of my own favorite DJs and producers I’ve worked with over the years, as well as some friends who do visual and performance art.

Music will come from DJ Per, Psyborg, Cygnus and Chris Rodriguez; Bijou de la Mer will be doing a burlesque performance; Tanja van Haasen and some of her friends will be doing some body painting; and Soliel Psychedelique and Naked Lens Photography will have a few visual pieces around.

Then on March 18, I’m deejaying a Tron-themed costume party called The Grid, also at The Nines. I’ve been pondering tracks about space and time, and have been looking for all of the fun analog synth sounds in my collection for that party. You can still hear me dropping in at KNON 89.3 FM every once in a blue moon, usually on Mansions of Madness, which is hosted by Heironymous Superfly in my old overnight Friday night midnight to 4 a.m. slot.