Nick Rallo
The Grand Mac at McDonald's with American cheese and tons of Special Sauce and pickles.
Imagine something with me for a moment: A 500-pound lobster, grown by some mad scientist, standing upright and wreaking havoc through downtown Dallas, snipping light poles and knocking down street signs with its massive claws.

That’s the image that popped in my head when I ate the Grand Mac. Why? Because there’s an unnatural, comic-book creature element to McDonald’s new big brother to the Big Mac. It reminded me of what would happen if you grossly enlarged the slightly terrifying features of a lobster: They already have claws and long, stabby antennae and protruding eyes and hairy flaps. An average-sized lobster is fine and superbly delicious, and dipping bolts of tail into melted butter is the gods’ gift to us. If you made a lobster ginormous, however, it’d look less like an appetizing delicacy and more like something that elbowed its way out of a murky swamp looking for human flesh.

This is what the Grand Mac feels like. It’s like a science experiment gone wrong. Before you unveil it, the box warns: “You’re gonna need two hands.” 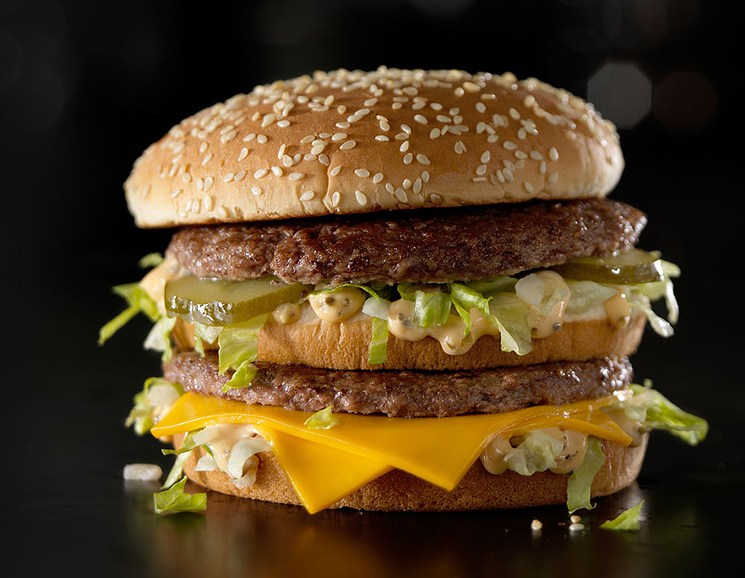 Here’s how McDonald’s envisions their Grand Mac; your results will, obviously, vary.
Courtesy of McDonald's
After testing the sandwiches in the North Texas market last spring, McDonald’s has added two new takes on the Big Mac to their menu nationwide: the Grand Mac and the Mac Jr. The Grand Mac’s specs: 1/3 pound of beef, two slices of American cheese, a super-sized sesame bun, lettuce, onion and pickle. It’s a behemoth. The Mac Jr., conversely, is a single-layer Big Mac that’s “easier to eat on the go,” McDonald’s says in a press release.

The joy in McDonald’s burgers (like, for example, White Castle’s burgers) is that they’re just small enough that you can fire them down like your arm is a T-shirt cannon at a Stars game. They weigh in just under the “I feel deep shame” burger size. The Big Mac, as a fast food icon, is modest too. It’s just large enough to be meaningful, and just small enough that you don’t notice the terrifying intricacies. You devour one, blissfully unaware of its ominous potential.

Increasing the size only exaggerates the horror. The larger bun was, somehow, drier than its average-sized sibling, as though Grand Mac’s buns are made of pressed and formed sand. And there was so much Special Sauce. Lakes of it. Lettuce was soaked like it’d been hit with a tidal wave.

Then, there are the burger patties. The classic McDonald’s burgers are sized just fine: They’re like smart, cool-headed bank robbers who don’t alert anyone to their presence. Classic McDonald’s cheeseburgers elegantly hop into their escape car and leave the scene awhile later. The Grand Mac’s patties are clumsy and floppy, as though there was no planning to the heist. They’re the bank robber who’s quaking so much the gun goes off, and the teller immediately drops the security bars.

I stopped in just as a giveaway was finishing up at the McDonald’s on Royal Lane and Central Expressway. The first customers at this McDonald’s got bottles of Special Sauce with their order. Long after eating the Grand Mac, I felt the weird unease that comes from eating McDonald’s. Usually it fades in a few minutes. This one lasted longer, like some sort of doom potion. Maybe that was from the 52 grams of fat, or the 62 grams of carbs. Devour this thing and you’ll take in 1,470 mg of sodium, 860 calories and 140 grams of cholesterol. Before you even touch your fries or shake, you’ll have taken in 91 percent of your daily recommended saturated fat intake.

Don’t get me wrong, I love a good fast-food burger. Give me a green chile-laden Whataburger or an animal-style Double-Double at In-N-Out any day, anytime. McDonald’s new burger, however, feels more like something Dr. Frankenstein created.

It’s alive — and it really shouldn’t be.