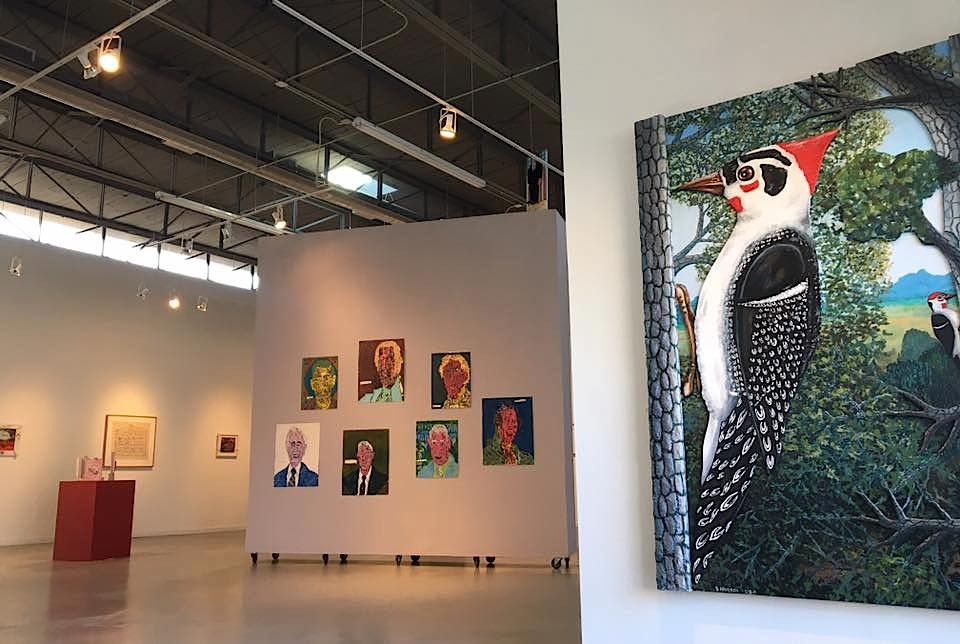 courtesy Kirk Hopper Fine Art
Margins Beyond closes Saturday at Kirk Hopper Fine Art.
Murray Smither went into the prison in Huntsville not knowing what to expect. But the art appraiser knew the surroundings well — he was born and raised in the city about an hour north of Houston — and he was in good company. His friends, faculty at Sam Houston State University, had been called in to judge a prison art competition and invited him to join. The year was 1964.

Frank Jones was one of the artists whose work was in the competition; except he didn’t know. He’d been making drawings on scraps of paper with nubs of red and blue pencils discarded from the administrative offices. The drawings depicted grid patterns filled with jagged edges and rudimentary, cartoonish faces smiled ghoulishly from inside the grids.

A prison guard entered the drawing as a joke, yet Jones won.

“I became very pushy and ordered the faculty to give him the first [place] prize,” Smither says, who bought the drawing on the spot. “It was totally unique; like nothing I had ever seen before.”

This chance meeting kicked off a fortuitous relationship between Smither and Jones. The art appraiser began collecting Jones’ work, eventually persuading his boss, Chapman Kelley, the owner of a prestigious Dallas gallery, to represent the incarcerated artist. On Jan. 14, more than 50 years later, Smither milled around Kirk Hopper Fine Art in Deep Ellum on opening night of Margins Beyond: Self Taught, a group exhibition that displayed several of Jones’ drawings.

Murray Smither (right), art appraiser, at work.
Courtesy Kirk Hopper Fine Art
The concept behind the group show is just as it sounds. Hopper and assistant director Giovanni Valderas brought in a handful of artists who operated on the margins of the “in crowd,” making art that perhaps wasn’t accepted by the mainstream art world. They were self-taught. They were the rebels.

Many dealt with mental illness, such Alessandra Michelangelo, who spent much of her adult life in mental institutions for schizophrenia, and Jones, who was never formally diagnosed but was also thought to be schizophrenic. He had often complained of the “devils” that plagued his thoughts and saturated his drawings.

“According to Frank Jones, his mother told him that he had been born with a ‘veil’ over his left eye, which would allow him to see into the spirit world,” writes author and art consultant Jay Wehnert, who contributed several of Jones’ pieces to the show. “This is an African American folk belief that a ‘caul’ [part of the fetal membrane left over the newborn’s eye at birth] will enable the child to see and communicate with spirits, often described as ‘second sight.’ Frank Jones grew up with this belief and expectation. ... He began to see spirits [from] about the age of nine. … They were an ominous presence in his daily life.”

Forrest Bess is another Texas artist who saw visions that he translated into his work. Bess was a mainstream artist repped by Betty Parsons in New York, who also repped Jackson Pollock, but he was an outcast. Bess performed genital surgery on himself because he believed hermaphroditism conferred mystical properties. Also much like Jones, he lived in isolation, except Bess’ isolation was self-imposed on a remote peninsula off the coast of Texas.

Other artists including Bill Haveron, the Reverend Johnnie Swearingen, Eddie Arning, Lee Godie, Bert L. Long and more round out a very complete show that’s closing this Saturday, Feb. 11, after a special panel discussion including Smither, Wehnert and Haveron at 4 p.m.

Murray Smither picked out Frank Jones’ drawings, made on scrap paper with nubs of red and blue pencils that been discarded, from a Huntsville prison art competition.
courtesy Kirk Hopper Fine Art
Jones was born in East Texas in 1900, a first-generation freeman whose parents had been slaves who came to Texas to work the cotton fields. He was implicated in a series of crimes — first a rape, then a robbery-murder and then another rape — that kept him in and out of prison for most of his adult life. According to Smither, he was framed in the robbery-murder by his own adult stepsons with whom he had a fractious relationship.

Jones was simple, naïve and maybe even mentally handicapped in addition to being schizophrenic. Wehnert speculates about Jones’ reduced mental capacities in a passage he wrote for his upcoming book on outsider artists. Smither is convinced Jones was an easy target and wrongfully convicted in each of the crimes.

“I took a filmmaker to his hometown of Gainesville, Texas, and we explored. We went to the city jail where he was incarcerated for some time; it was extremely primitive,” Smither says. “It was mostly white people. I’d never felt that any place was as prejudiced to black people as this town was.”

Despite Jones’ incarceration, his drawings took off with collectors in Dallas. One of his biggest patrons was Mildred Hawn, who Smither says owned at least 15 drawings. Hawn was the wife of William Russell “Fritz” Hawn, a founding partner of the Dallas Cowboys franchise. A longtime patron of the arts, she’s the namesake of the Mildred Hawn Exhibition Gallery in the Hamon Arts Library at SMU, and the Henry Moore sculpture in front of Dallas City Hall was donated in her memory.

“Wealthy people just loved [his drawings]. They were pretty and fanciful, and they’d never seen anything like it,” Smither says.

He remembers the gallery didn’t charge much for Jones’ work. Smither dug out his records during the interview and found that the selling prices were between $40 to $70 — not much for art even by 1960s standards. But it was a fortune to Jones, who went wild with the newfound money.

“Each time I went to visit him I noticed he had a new watch, or two or three rings on his fingers,” Smither says. “The other prisoners knew he had money, so they would sell him a ring or an ornament of some kind. At one point he had rings on all of his fingers.”

A resident of Oak Cliff, Smither would visit Jones in prison on his monthly trips to Huntsville to see family. He supplied Jones with paper and a variety of colored pencils, although Jones preferred to stick with his original color scheme of red and blue. On one occasion, Smither told Jones he wouldn’t be able to see him the next month because he would be traveling.

“He wasn’t at all happy about that. He told me I’d better be careful and look out for bad women, whiskey, and gamblers.” When Smither returned, Jones had made a drawing inspired by the trip.

“It was me on a train surrounded by devils. In a reference to firewater, or whiskey, there’s a figure with fire shooting out of its mouth. A lot of voluptuous women are all around me, and there’s a little man made out of dice.” The drawing is titled the “Murray Devil House” from 1968 and is currently hanging in Kirk Hopper’s gallery. This one isn’t for sale.

Forrest Bess was represented by the same person as Jackson Pollock.
courtesy Kirk Hopper Fine Art
Jones started making paintings late in life — he was in his 60s, and the drawings represented what he saw in both his tangible and supernatural worlds. By drawing the devils inside the grid system, which was reminiscent of a prison cell block, “he was able to contain their powers over him,” says Wehnert.

In a very meta relationship between what he was living and seeing and what he was drawing, Wehnert relates that Jones said, “I’m safe from them when they’re in the house.” Just like society felt they were safe from Jones and other “criminals” when they were confined.

Smither was working with a state representative to get Jones out of prison when Jones passed away from liver trouble in 1969. He was nearly 70 years old. “Frank liked being there. He was there for 25 years,” Smither says. He never learned to read or write. “He had no formal schooling. I think if he’d been out of prison his schizophrenia would have been worse. He could operate well in prison.”

Smither was named executor of Jones’ estate. He had parted ways with Chapman Kelley to start a gallery with a new partner, yet Kelley sued him for the rights to Jones’ work and won.

One of the three drawings shown at Kirk Hopper is from Smither’s private collection, a collection that includes art by other inmates like Bobby Dobbs and Henry Ray Clark. He ended up judging many more prison art shows after discovering Jones, eager to find more raw talent.

Jones’ work has multiplied in value many times over. Prices at Kirk Hopper hover around $10,000, and he’s been shown many times around the U.S.: in Cavin-Morris Gallery in New York, Fleisher/Ollman Gallery in Philadelphia and Carl Hammer Gallery in Chicago.

Not a bad legacy for someone who never meant to be an artist.