At $26, the Most Expensive Burger in Dallas Is a Cascading Series of Bummers 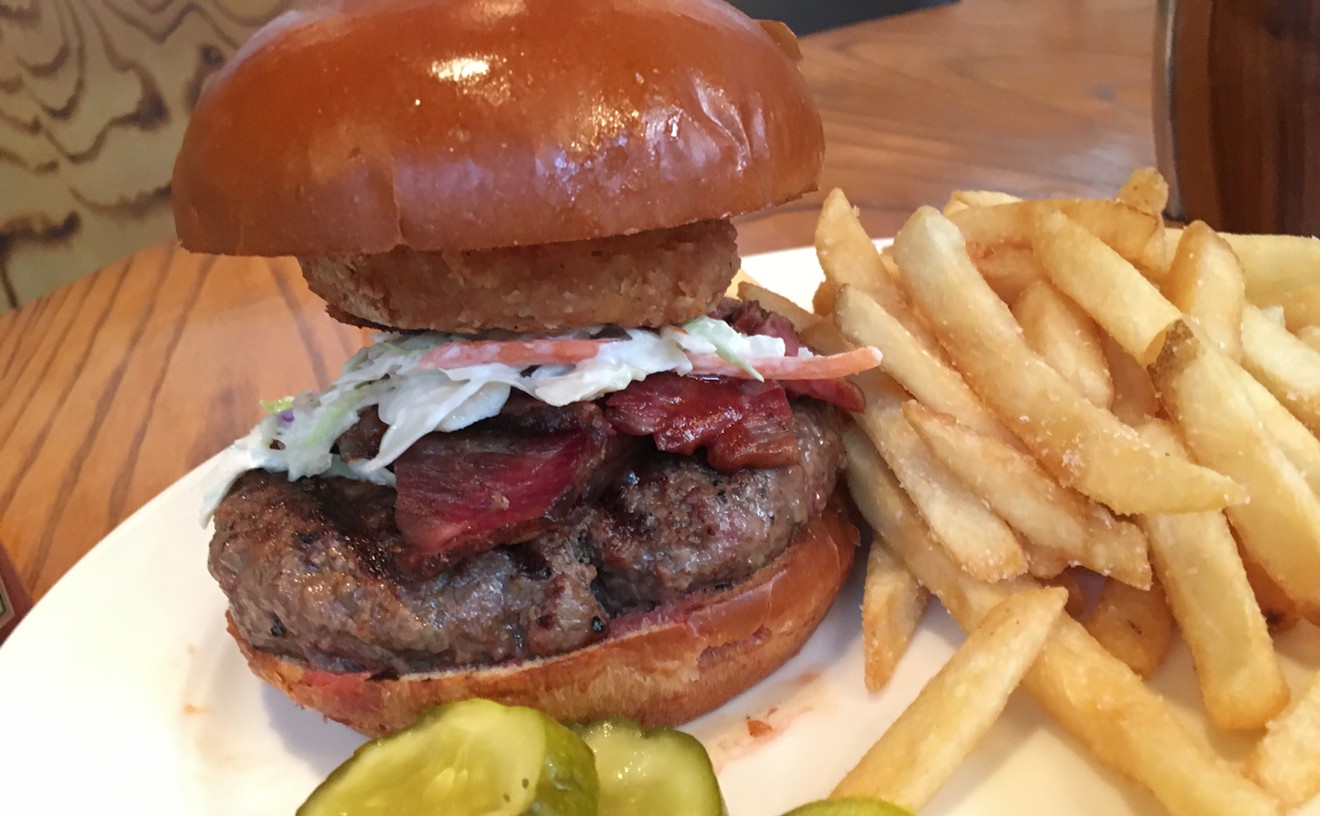 Nick Rallo
The strange construction of the burger at the Crescent’s Conservatory, with a side of fries and a couple of perfunctory pickles for $26.
Do you remember the little pulse of excitement you felt when the trailer for Suicide Squad was released? There was this poppy-electric feel to it as soon as Queen’s “Bohemian Rhapsody” burst into frame. It felt like something that’d be sharp and fun. Then, the movie was released, and it was actually just a cascade of dull bummers. Joker made a small appearance, the story was tired, and the villain was a boring wash. This is roughly the same letdown I felt as I made my way through the $26 burger on the new menu at the Crescent’s Conservatory. It lets you down the way Hollywood lets you down when it tries to reboot a classic from your childhood.

On the surface, the burger appears to be full of electricity and bold flavors: The menu promises “fried green tomatoes, barbecue brisket, caciotta cheese, pickled mustard seed slaw on a toasted brioche bun.” OK, yeah, that’s a lot on one burger, but imagining thin, shattering cornmeal-fried green tomatoes, a slab of melt-in-your-mouth brisket and the cooling, razor-sharp pickled slaw to balance it all out sounds pretty good, in theory. For 26 bucks, my expectations were running high.

And thus, the most expensive burger in Dallas arrives in front of me after a 30-plus minute wait and it’s got a confusing construction. The top bun balances precariously over a single fried hockey puck of a green tomato. Beneath that is the pickled slaw, which is pretty much just regular old coleslaw, shards of brisket, and a quiet slick of barbecue sauce. The cheese is nowhere to be found. Sitting with the nearly $30 burger is the sliced end of a boring house pickle and a pile fries too salty to enjoy.

I press my hand over the brioche bun to cut it in half (to check if it’s medium rare like I asked), and, as I slice, I realize my mistake as the dry top bun sent the fried green tomato puck, brisket and slaw shooting off the burger. The tomato, encased in a concrete-thick batter, made me feel like I tried to cut a bowling ball on top of a glass table. I nearly knocked over the tiny, airport-sized Heinz ketchup and Dijon mustard bottles they brought to the table still wrapped in that frustrating plastic. For a 26-buck burger, can you whip up a couple of house condiments at least? For that price, you should monogram the entire meal with my initials.

My beef patty is cooked medium rare but it’s nearly flavorless. Maybe the Crescent can add 10-or-so more bucks to the price to have Salt Bae crane some seasoning over this thing. There’s some juice to the patty, but little to no char or sear. Like the Joker in Suicide Squad, the brisket barely showed up and left only questions in its wake. Why add “BBQ brisket” to this burger? Is this purely Texas pandering? And where was the mustard seed in the slaw? I got mostly mayonnaise. The fried green tomato tasted mostly like tough, fried batter. I tried the burger without the toppings, and it was an unsalted bummer. The brisket, the little that was there, had better fat and flavor.

The $26 burger at the Conservatory is one of two new, expensive burgers in Dallas (the other is a 19-buck, house-ground brisket and shoulder at Nick Badovinus’ Town Hearth). I’m all for the occasional high-end version of the at-home foods that we love, but at the elevated price, they need to have a flavor and plating that's damn near extraordinary. I wasn’t feeling this with the Conservatory’s sandwich. With a beer or a cocktail, you’re easily pushing 40 bucks for a letdown with fries at the Crescent. In other words, this is the Suicide Squad of Dallas burgers.