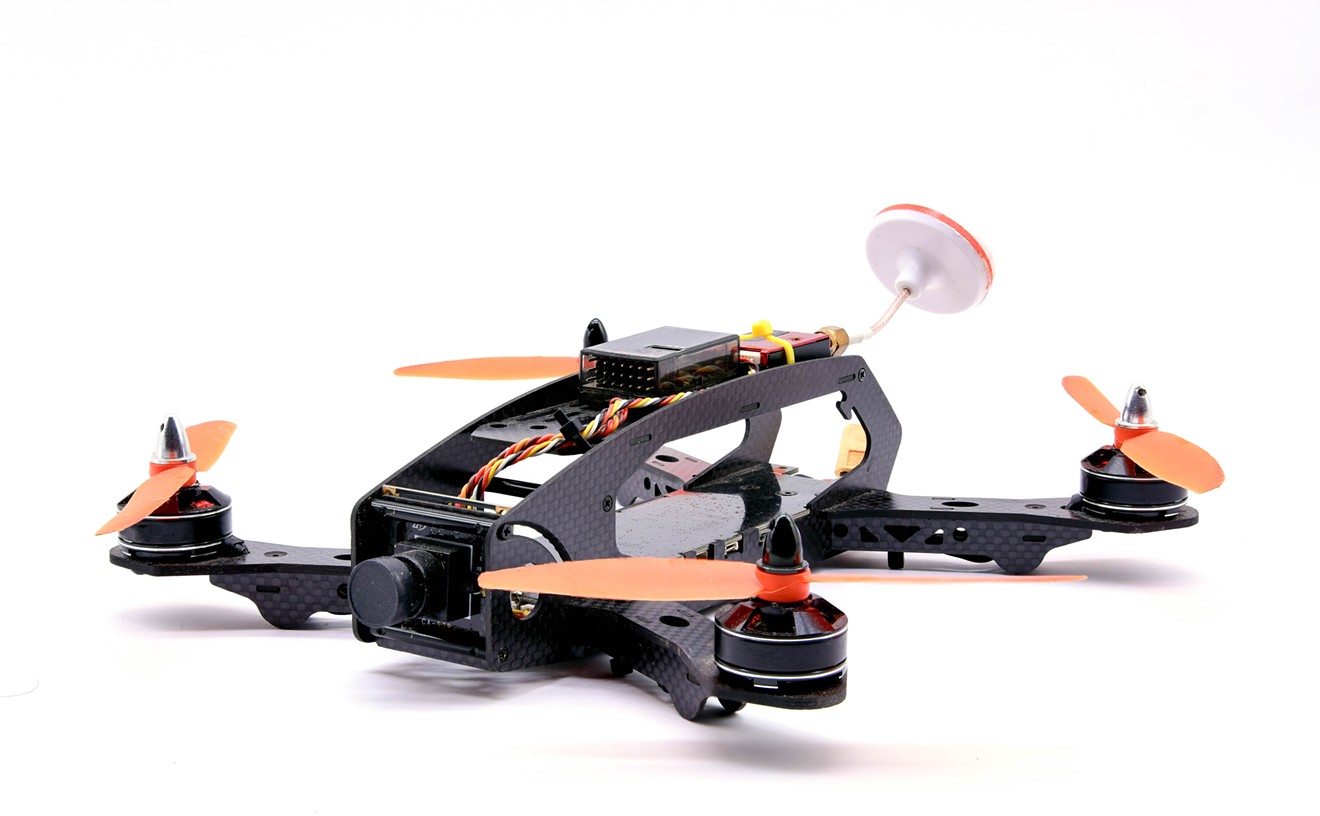 Tochanchai/Shutterstock
Race drones, or just watch them race, at the Cavanaugh Flight Museum in Addison Saturday.
Elle
Texas Theatre
231 W. Jefferson Blvd.
8:30 p.m. Friday, 6:30 p.m. Sunday
$10
It seems like writer/director Paul Verhoeven’s entire film career is dedicated to escaping from the long shadow of Showgirls. The psychological thriller Elle may be the movie that finally helps him shake it. The dark story behind this critically acclaimed French film is about a ruthless business woman who’s attacked in her home and tracks down her assailant in the kind of cat-and-mouse game that puts the “thrill” in “thriller.” See the film at 8:30 p.m. Friday or 6:30 p.m. Sunday at the Texas Theatre. Visit thetexastheatre.com to purchase tickets. — Danny Gallagher

Ticketstock
Irving Convention Center at Las Colinas
500 W. Las Colinas Blvd.
Gates open noon Friday and Saturday
Free
Fans of sports radio station 1310AM the Ticket have a lot to look forward to this weekend. On Friday and Saturday, on-air personalities and celebrities in the world of sports will descend on the Irving Convention Center for round-table discussions, autograph signing and even a game of Hollywood Squares. The Friday guests are Joel Klatt, Tyler Seguin, Cody Eakin and Barry Switzer. Saturday it’s David Irving, Lance Dunbar and Cal Ripken Jr. There will also be a craft beer garden courtesy of Deep Ellum Brewing Co., so this is prime time to mingle with other listeners.

Oscar-Nominated Shorts
Modern Art Museum of Fort Worth
3200 Darnell St.
Multiple showtimes Friday through Sunday
$6 to $9
It happens every year around Oscar time. You’ve seen every major movie that’s on the ballot at a theater near you. You’ve read every review from every major critic. You get all the way through the nominations and for once, you think you’re going to dominate the betting pool, until the evening gets to the shorts category. But this year, you’ve got an ace up your sleeves. The Magnolia at the Modern Art Museum of Fort Worth will screen all of the Oscar-nominated short films in both the live and animated categories. Screenings are scheduled at 6 and 8 p.m. Friday; 5 p.m. Saturday; and 12, 2 and 4 p.m. Sunday. Tickets ($9 per person, $7 for museum members and $6 for “Reel People” members) go on sale at the box office two hours before each scheduled screening. Visit themodern.org for more info. — Danny Gallagher

Drone Wars IV
Cavanaugh Flight Museum
4572 Claire Chennault St., Addison
1 p.m. Saturday
$10
Here at the Observer, we’ve been experimenting with the journalistic applications of drones. You can learn more about these remote-controlled aircraft and even fly one yourself at Cavanaugh Flight Museum’s next drone wars, where the main event will be races inside the 11,000-square-foot airplane hangar that the museum calls home. The races start at 1 p.m. and it’s $10 to spectate. If you’ve already got a drone and you’re an expert flyer, show up earlier at 9 a.m. and pay $25 to compete.

True South
Photographs Do Not Bend Gallery
154 Glass St., Suite 104
5 p.m. Saturday
Free
There are many sides to the Southern United States, and a group exhibition at PDNB Gallery, True South, will strive to show many of them. The exhibit features diverse works — landscapes and environmental and classic portraits — on subjects ranging from the Mississippi Delta to Texas. Artists include Keith Carter, Earlie Hudnall, Jr., Brandon Thibodeaux, Shelby Lee Adams and more. The show runs in conjunction with Jeanine Michna-Bales’ exhibition Through Darkness to Light: Seeking Freedom on the Underground Railroad, which covers approximately 1,400 miles of paths, crossings and sites used by abolitionists and slaves seeking freedom. Michna-Bales will sign books during the joint reception. True South runs through April 15. Visit pdnbgallery.com to learn more. — Merritt Martin

Midtown Art Walk
Valley View Center
13331 Preston Road
6 to 10 p.m. Saturday
Free
Valley View Center has been slated for demolition for over a year now, to make way for a new mixed-use development called Dallas Midtown. Now the walls are finally coming down, and that means all of the businesses who’ve called the mall home in its twilight years need to unload their merchandise. This includes a number of art galleries. So say goodbye to the ’70s relic and get prime deals on paintings, pottery, glass works and more during the final Midtown Art Walk, which doubles as a liquidation sale.

Gina Orlando — Accidental World: Party Island
Circuit 12 Contemporary
1811 E. Levee St.
Opening reception 6 to 9 p.m. Saturday
Sometimes works of art require a second (or third) look. Remember those trippy paintings that were popular in the ’90s? While not quite so abstract, Gina Orlando’s starburst-tinged exhibition opening at Circuit 12 Contemporary asks you stop, look and stay awhile. Orlando, a graduate Booker T. Washington High School for the Performing and Visual Arts, practices multidisciplinary techniques with the common denominators of time — past, present and future — and an almost limitless access to technology. — Rachel Williams

Matthew Posey Benefit Concert
Club Dada
2720 Elm St.
Noon Sunday
$10 donation
Can bad things stop happening to good people now? We’d like that. But in the interim, we’d be satisfied if enough good people did enough good things to overwhelm the bad. And therein lies the potential for the Matthew Posey Benefit Concert, kicking off at noon Sunday at Club Dada. The concert will raise funds for Posey, the prolific playwright, actor, director and progenitor of the Ochre House Theater in Expo Park, who was shot on Jan. 30. Posey had initially — and characteristically — asked for all donations to go straight to his theater, but now dental bills to repair the damage done by the gunshots are mounting. The lineup is yet to be announced, but expect an outpouring of music, art and love. — Jennifer Davis-Lamm

North Texas Craft Beer and Chili
LUCK
3011 Gulden Lane, Suite 112
Noon to 4 p.m. Sunday
$10
When beer and chili collide, beautiful things are bound to happen. Join North Texas breweries at LUCK for a chili cook-off where the secret ingredient isn't exactly secret: beer. Each participating brewery will craft their chili using one of their own beers. Does IPA marry well with ancho chile? Should beans and brews ever cross paths? Only you can decide. A $10 donation, which goes to the North Texas Food Bank, gets you 10 samples and a say in the vote. Following the knock-down drag-out competition, LUCK will also add the winning chili to their menu for a limited time. — Kathryn DeBruler