Kathy Tran
It is hard to blame The Pin Show organizers for wanting to show as much of DFW’s fashion talent as possible. The Pin Show is the highest profile platform that most of these young designers have had so far to show off their skills.

But sometimes too much of a good thing is a bad thing.

Last weekend, The Bomb Factory hosted the ninth Pin Show, a platform for independent fashion designers to showcase their work. This year’s event featured the work of six “established designers” that included University of North Texas alumni Dika Obiaju and Jiani Chen, and 19 up-and-comers in the “emerging designers” category. In addition to the 25 designers who presented collections, the event also included two separate Indiaspopup.com segments featuring the work of five designers from India.

Thirty designers and a 20-minute intermission made for quite a long night. The pacing seemed a bit haphazard and even with the long running time, it would have been nice to have each designer introduce the collection. A special app was created for the event that listed the presenting designers with links to their social media and website, but individual collection names were nowhere to be found. Perhaps future editions of the show would benefit from sacrificing the number of designers featured to make room for formal introductions and to allow each designer to shine more brightly and not get lost in the mass.

In an evening full of talent, here are some of the night’s standout emerging designers worth keeping an eye on.

Shira Artis — Shira Simone Designs
Like many of the night’s designers, Shira Artis is a graduate of UNT’s fashion design program. The Pin Show being her first fashion show, Artis wanted to focus on the basics, allowing the audience the opportunity to see what magic she could produce with an offering of sportswear essentials like jackets and pants. “I wanted to put a different spin on the basics by using different fabrics and cuts,” Artis says. Artis delivered a cohesive collection entitled “Vive” which utilized soft, delicate fabrics that give a feminine edge to contemporary sportswear.

Alcantar
via Carina Ortega on Facebook
Carina Ortega — Alcantar
Carina Ortega’s Alcatar 2017 collection offered up slick and modern pieces, all beautifully constructed. Strong geometric lines and cut-out details were made softer by Ortega’s choice of fabrics and pastel colors. The collection mixed fitted and oversized garments and was inspired by outfits worn by samurai, Ortega says. The Pin Show might have been Ortega’s third fashion show but she was just as thrilled to see her piece down the runaway as if it had been her first. “I felt relief and excitement that it was all finally out there for people to see what Alcantar is all about,” Ortega says.

Octavio Chavez — Ain’t No Lady
Octavio Chavez chose to use male models to present his “Ain’t No Lady” Volume I collection since not too many local designers work with menswear,  but Chavez doesn’t want his clothes to be constrained to a binary notion of gender. The name of his brand arose from an inside joke between him and his female friends. Chavez would wear a tunic. His female friends would jokingly say they were all wearing dresses, and Chavez would respond, “Yes, but I ain’t no lady.” “I’ve always said that clothing isn’t feminine or masculine. It’s how how the person wears it. The clothing is just an instrument to express yourself,” Chavez says. The collection included crop tops, tunic, leggings, coats and pants. The pieces, partly inspired by the art and illustrations of anime, incorporated mesh, neoprene, denim and free-hand embroidery with an easy-flowing, street art vibe. 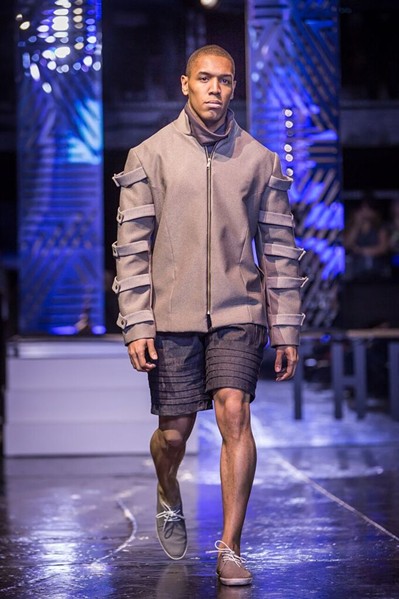 Radkeem Sims
courtesy Pin Show
Radkeem Sims — Do Not Hurt Me
UNT senior Radkeem Sims also brought often neglected menswear to The Pin Show runway. His collection “Do Not Hurt Me” contained pieces embellished with fur and belts, giving an edgy sophistication to both men’s and women’s wear. “I want people to embrace themselves, embrace their cool,” Sims says about his clothes. Sims’ post-graduation goals include interning for the big fashion labels of the world and eventually having his own successful brand. After participating in his first fashion show, Sims offered his nephew some advice. “I told him, 'Don’t let anyone strip you of your dreams. Do what you want to do.' He saw my struggles through school and I am about to graduate,” Sims says.

ZoMarquerite
Kathy Tran
Jeanette Goodlin — ZoMarquerite
A junior in high school, Jeanette Goodlin was the youngest designer at The Pin Show, but don’t let her youth fool you. Goodlin was able to expertly execute a collection with a clear vision and direction. Named after the neighborhood her mother grew up in, “Royal Oaks” offered up jackets, dresses and parkas with ’80s street chic vibes. Goodlin also incorporated quilted panels and prints reminiscent of Renaissance times. “I wanted to mix the popular with things that aren’t, like the Renaissance,” Goodlin says. “I really love the Renaissance and I feel like there are cool things that are forgotten about it because it was long ago.”

Molly Margret Designer
courtesy Pin Show
Molly Sydnor — Molly Margret Designer
Molly Sydnor is a multimedia artist who studies fiber art and textile design. Regardless of the medium, her work focuses on the body and explores race, identity and sexuality. “Soft Serve” is a collection that juxtaposes fabrics and colors that incorporate Sydnor’s vibrant and interact loom work. “I was listening to this podcast, and this woman was talking about her mixed children, how she hates when people ask her what they’re mixed with because she doesn’t think they’re an ice cream flavor,” Sydnor says. “It just kind of resonated with me and that was the inspiration behind Soft Serve. I’m working with dualities: duality of the materials, the duality of spandex knit fabric versus woven, the duality of dark versus light.” It’s a group of dichotomies that came together to create one of the night’s most distinctive collections.