Organized Democratic Activists? Not in This County. Not Organized, Anyway. Shutterstock
The origins of the Tea Party movement are well established by now, and the term "grassroots" is nowhere in the picture.
President Trump tweeted two days ago: “The so-called angry crowds in home districts of some Republicans are actually, in numerous cases, planned out by liberal activists. Sad!”

I got so excited when I read it. You mean liberal activists are actually going to do to Republicans what the Tea Party did to Democrats after Obama got elected? And we’ll get to see it here in Dallas County, after all, because we’re such a blue county?

So cool! At last, organized mobs of Dallas County Democrats are going to show up en masse and heckle the hell out of Republican stalwarts like Congressmen Pete Sessions, Jeb Hensarling, Kenny Marchant, Michael Burgess. What a fair turnabout that will be. From a strictly news business point of view, what great action!

The first Democratic mayor I covered in Dallas was the late Annette Strauss, elected in 1987, whom I liked and admired a lot. She was pro-art and anti-crime.

From 1995 to 2002 we had another Democratic mayor, Ron Kirk, who ran on a platform of ending the blame game. Nobody knew exactly what that meant, but it sounded right. As it turned out, blame game meant democracy.

Kirk said too much democracy had prevented Dallas from double-decking Central Expressway. And don’t we all just wish we had a big roaring smoke-spewing elevated expressway up the spine of the city right now! Kirk still says too much democracy has prevented us from building another smoke-spewing expressway on top of the Trinity River. That’s a Dallas County Democrat for you.

From 2002 to 2007 we had another Dallas Democrat for mayor, Laura Miller. Her big deal was too many beggars. She was hell on beggars. Wanted them out of sight now! What a cause: Dallas County Democrats Against Beggars.

We have a Democrat as mayor right now, Mike Rawlings. Two years ago he played his Democrat card to score a meeting with then brand-new, still wet-behind-the-ears, 35-year-old Democratic Secretary of HUD Julian Castro. Rawlings talked Castro into a deal to cut down on affordable housing in Dallas.

I wonder if Castro looks back on that deal now and thinks, “Oh, I should have noticed, his card said Dallas Democrat.”

The Dallas County Democratic organization itself has always been a puzzle. On the one hand, the local party has a great record in terms of getting Democrats elected to partisan local offices, mostly judgeships, obviously thanks to the overwhelmingly blue demographics of most of the county and to a heck of a lot of money from trial lawyers.

On the other hand, whenever the leadership of the county organization does speak its mind, one can’t help wondering if Democrats here win elections in spite of their local party leaders, not because of them.

“Just weeks ago,” Donovan said in a written statement, “our top law enforcement official was involuntarily committed after threatening to kill herself.” On that basis, Donovan said Hawk should step down. The head of our local Democratic Party beats up on somebody for mental illness.

Yes, I beat up on her for it, too. But I’m not the head of the local Democratic Party, am I? You don’t see big headlines, “JIM SCHUTZE FOUND TO BE ASSHOLE.” That’s not exactly a breakthrough.

The local Democratic Party has a quite different bar to meet. In the first place, the county Democratic Party wasn’t able to hold onto the DA’s job when even a blind dog could get elected to a Dallas County judgeship, assuming the dog’s a Democrat. Then, after a Republican snatched the most powerful post in the county away from them, their big strategy for getting even was to put her down for having thoughts of suicide. 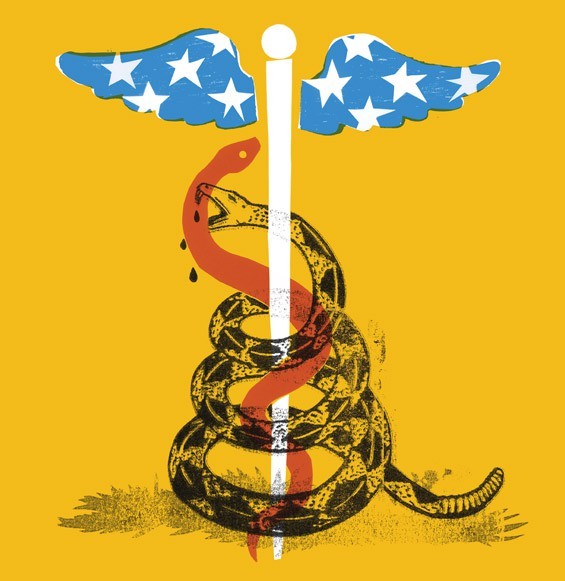 The Tea Party borrowed heavily on the tobacco industry's expertise in persuading people to vote against their own obvious self-interest.
Justin Renteria
These are Democrats! And I’m supposed to believe they’re going to out-Tea-Party the Tea Party? Not here. Not in Dallas. I don’t think so.

In the late ’90s we had sort of a ringside seat here to watch the creation and formation of the Tea Party, since one of the main henchpersons behind it, former Congressman Dick Armey, was from here. I can only laugh now when I hear Tea Party people talking about how their movement was “grassroots.” What kind of grass?

You may not remember the big blow-up five years ago when Armey, a former House majority leader, and his wife and a guy with a gun walked into the Capitol Hill offices of Freedom Works, the Koch-funded Tea Party Astroturf operation in Washington, and ousted five employees in an internecine purity war.

By the time the dust settled on that one, the five ousted persons were back; Armey, his wife and the guy with the gun were all out; but to get Armey out they had to promise him a payoff of $8 million, according to the Washington Post.

Eight million dollars just to go away. Does that sound like Astroturf to you? The story of the origins of the Tea Party — millions paid to Rush Limbaugh and Glenn Beck to do undeclared on-air advertorials, the whole thing conceived and bankrolled by far-right billionaires — is well-established history by now.

In his book published last year, Poison Tea: How Big Oil and Big Tobacco Invented the Tea Party and Captured the GOP, former insider Jeff Nesbit explained how important the pro-cancer lobby had been. The tobacco industry had developed deep expertise in fooling people into voting against their own obvious self-interest — “By God, I’ve got a right to my cancer!” — and was able to show the Astroturf Tea Party operation how to transfer those skills to general politics.

The great fact of our own times now is not that Democrats ever succeeded in defeating any of the Astroturf Tea Party that the billionaires had built. The big fact is that the monster is now out of control and threatening to wreck Dr. Frankenstein’s castle.

We could call that poetic justice if that didn’t seem like an inane thing to say about a situation that could kill us all. How much poetic justice is there in a mushroom cloud?

So here’s where it ends up for me. If I ever look up and see a bunch of screaming angry protesters mobbing Pete Sessions’ office to deride him about killing Obamacare, I may, indeed, be just like Trump and wonder if somebody paid them and bused them in from another state. Maybe from another country.

I may even wonder if they’re from another planet. But one thing I will know for sure. They won’t be from the Dallas County Democratic Party. You can’t get that kind of blood out of that kind of turnip.