The 10 Best Concerts of the Week: Green Day, the Lumineers, 1919 Benefit and More 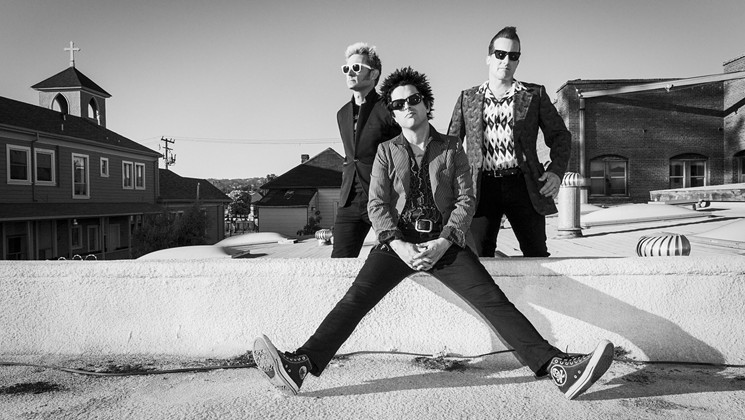 Raised in Jackson, Tennessee, Valerie June was exposed to gospel, R&B and soul music from an early age by her father. She breathes fresh air into the singer-songwriter scene, with a stage presence strong enough to draw in a crowd all on its own. The now Brooklyn-based June has released three albums since her career took off a decade ago, one of which includes collaborations with Black Keys' frontman Dan Auerbach. Her upcoming album, Order of Time, is set to release March 10. Diamond Victoria

The Lumineers got their start after Josh Fraites died of a drug overdose in 2002. Josh was the best friend of Lumineers vocalist and guitarist Wesley Schultz, and the brother of drummer and percussionist Jeremiah Fraites. It just goes to show that sometimes in the wake of tragedy, something really great can emerge. The indie-folk band have really made a name for themselves professionally the past few years and tonight the Denver-base band best known for their love song "Hey Ho" is playing Verizon Theatre at Grand Prairie. But what's perhaps most special about Tuesday's show is the band's donation of all sales to Planned Parenthood of Texas. So, maybe go ahead and skip the cheap seats for something better. After all, it's for a good cause. DV

English trio of sisters, the Staves, have been a fixture of the indie folk rock scene for almost a decade. They've toured with Bon Iver and released their second full-length album If I Was in 2015. An EP, Sleeping in a Car, was released a year ago. The band argues that "nothing is original. Steal from anywhere that resonates with inspiration or fuels your imagination. Devour old films, new films, music, books, paintings, photographs, poems, dreams, random conversations, architecture, bridges, street signs, trees, clouds, bodies of water, light and shadows." And, hey, it's 2017. They're probably right. But they pull it all off with the style and ease of a band that is pioneering an entirely new sound of a generation to come. DV

The Moody Blues' Justin Hayward knows a thing or two about selling 70 million records worldwide. Why? Because his band, the Moody Blues, have done just that. The classical-rock fusion group became widely popular in the '60s rock 'n' roll scene, and then took an unexpected turn into pop with hits such as "Wildest Dreams" and "I Know You're Out There Somewhere" in the '80s. Hayward, the band's singer and guitarist, is playing an intimate solo show tonight at Granada Theater. DV

When we saw him, McMurtry picked up guitar after guitar, alternating between electrics and acoustics, as he inspired a crowd of 200 people to move their legs while standing in place, although a few of the more wild attendees spun and danced in front of the stage. Similar to his father Larry McMurtry, who is an award-winning, best-selling author (Lonesome Dove, The Last Picture Show, and Terms of Endearment — this Texas songwriter's lyrics tell stories of everyday life. Songs like "Choctaw Bingo," one of his more popular tunes; "We Can't Make It Here," Americana Music Awards' Song of the Year; and "Too Long In the Wasteland," a tune off his debut album, proved to be crowd-pleasers. Christian McPhate

Despite the catchy name, Nightmares on Wax is neither an '80s horror movie inspired tribute band nor a recreational party drug. It is instead, the nom de plume of George Evelyn, a legendary English DJ and respected hip-hop innovator. With a wide-ranging discography of studio albums, DJ mixes and one-off singles, Evelyn has earned rave reviews and respected press for his laid-back groove approach to spinning. Shying away from a signature sound or formula, Nightmares on Wax tunes typically burn bright and eclectic, running the gamut of several genres, from R&B to modern jazz to acid house. In short, the music makes for a powerful and memorable conglomeration of styles and substance. His Friday night appearance at It'll Do would be an ideal way to wind down after a long week. Jeff Strowe

Even though the mainstream love Green Day received during the worst of the George W. Bush years has not reached the same level in 2017, the Bay Area trio remains highly relevant. The band's shows are part arena rock show and part tiny club show; even the people in the back of the place feel involved. American Idiot might be the band's biggest achievement, but they surely had an amazing run up to it, especially with Dookie and Nimrod, albums they hopefully will play some tunes from. And don't miss opening act Against Me! The four-piece will knock your socks off with their blend of tuneful, banged-up pop-punk. Eric Grubbs

Denton-based Sarah Jaffe is one of the biggest names to come out of her hometown the past decade or so. And although the singer-songwriter has written music for big time movie companies such as Pixar and Stardust Pictures, Jaffe remains rooted in North Texas, playing several shows here each year, including tonight's at Dan's Silverleaf. DV

The livelihood of DIY art spaces in Dallas came under question last year when several complaints about code compliance arose and some spaces were shut down. 1919 Hemphill is one of the most iconic and longest running DIY venues in North Texas, and found itself among these safe art spaces under scrutiny. Now the venue is slated to host their first show in almost two months on March 10. And tonight offers up a great opportunity to support 1919 as Three Links puts on a benefit for the venue with local bands iill, Obstruction and Vault Dwellers. DV

He's sung about having sex with dolphins. He's sung about sandwiches, and love-making and God all in one breath. He makes R&B that sounds like it's from 2050, but feels like it's from 1970. His ultralight-beaming mega single "I Believe I Can Fly" soundtracked a movie about Michael Jordan teaming up with the Looney Tune cartoon characters in an intergalactic basketball game played against mutated, extraterrestrial amusement park proprietors. His approach to songwriting is at once crass and myopic and gloriously — somehow gorgeously — tasteless. For all the beauty in R. Kelly's music there's just as much blandness counteracting it, just as much imagination as ignorance, as much emotion as some inferior substitute of it. But there’s never been an R. Kelly before R. Kelly and there certainly won't be another one after him. Pure individuality — is there a greater measure of artistic success than that? Jonathan Patrick