The question has always been why. Why did the city of Dallas carry out a decades-long manifestly illegal campaign of persecution against a Dallas author?

Now that author, a Kennedy assassination expert whose theories differ from what he says is an official city doctrine, has agreed to a modest out-of-court settlement. But a City Council member is still intent on finding out what was behind the campaign to make Robert Groden disappear.

In what may or may not be the long-awaited end of his legal horror story, Groden, 71 years old and weakened by two recent strokes, has accepted a $25,000 settlement from the city of Dallas in exchange for his agreement to drop a civil rights suit.

Over seven years, the city has arrested or ticketed Groden 82 times for selling books and videotapes from a table in Dealey Plaza where President John F. Kennedy was murdered in 1963.

Dallas kept ticketing and arresting Groden even though the city’s own municipal judges ruled all of those tickets and arrests were bogus. What he was doing was never against the law, and somewhere between the 20th and 30th defeats in court the city had to figure that out.

This week when news of the settlement became known, City Council member Philip Kingston vowed to continue fighting to find out who was behind all of it in the first place.

“The truth is that he was being targeted,” Kingston said. “It’s crystal clear. So I have asked [Dallas City Attorney Larry] Casto to go dig and find out who ordered all this crap. No cop did that on his own.”

Casto, a former city lobbyist named city attorney last October, appears to be sweeping his decks clear of some legacy litigation, of which this case may be part. He said the settlement with Groden is not an admission of wrongdoing by the city and is not a guarantee that Groden can’t be prosecuted for something else in the future.

But he did suggest that the worst of it — the tickets and arrests for doing things not against the law — probably is over: “As long as he doesn’t break any laws, he will not receive any additional citations.

“We obviously can’t promise in any kind of settlement to let someone off the hook if they break the law,” Casto said. “But probably to the degree that we could, the settlement addressed an understanding on past behavior.”

Two years ago when Groden sued the city in federal court for civil rights violations, the city argued that he didn’t have a case because he couldn’t name an official city policy or a specific city official or person responsible for launching a campaign against him. A federal appeals court threw all of that out last year, ruling basically that the city did it and the city was responsible for what it did, whether Groden could name anybody or not.

I have always believed the Groden case was the perfect window on how Dallas City Hall really operates. Somebody outside of City Hall, somebody high up, has the ability to call the city manager and basically order that something be done. So it’s done. The City Council and mayor don’t even know it’s happening.

As Kingston said to me yesterday, no city attorney would willingly and of his own free will have volunteered to prosecute the 82nd case against Robert Groden after losing the first 81. Something like this comes from outside City Hall. Somebody told the city manager and the city attorney to make Groden go away.

But Robert Groden is a guy who doesn’t go away. The first independent researcher to get his hands on a copy of the famous Zapruder film documenting the moment when a bullet entered the president’s head, Groden has spent almost a half century producing books, pamphlets and videos arguing Kennedy was killed by more than one shooter.

He goes to Dealey Plaza every fair weather weekend and works from a table by a banner that says, “Grassy Knoll.” He and his assistant are always a hit, drawing big crowds from among the tourists who throng the plaza most weekends.

Some of his books have been bestsellers. He has consulted on movies and documentaries including Oliver Stone’s 1991 movie, JFK. In 1976 he was the chief photo-optics consultant to the U.S. House Select Committee on Assassinations, whose findings included the suggestion that more than one assassin probably was involved in the killing of Kennedy. 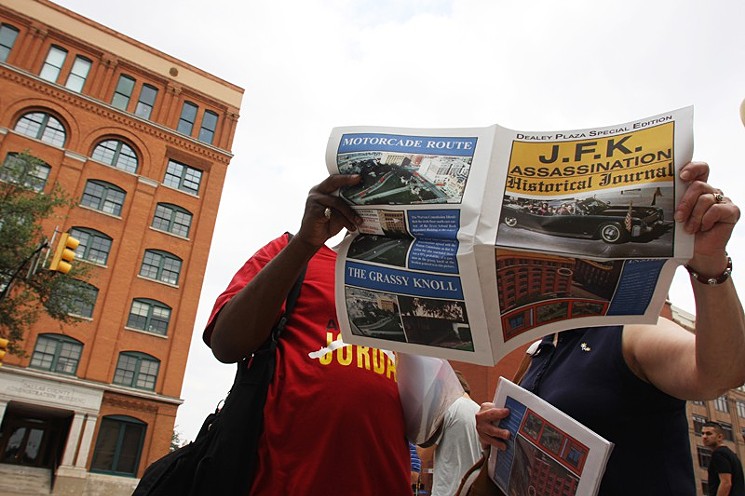 Dealey Plaza draws throngs of tourists, many of whom come to debate theories about the Kennedy assassination, which took place there in 1963.
Mark Graham
Another city might consider him a tourist attraction. The question has always been why this city tried so hard to run him off.

Groden still has an active lawsuit against the Sixth Floor, a Kennedy assassination museum at Dealey Plaza. Emails and other communications produced as evidence in Groden’s federal civil rights lawsuit show Sixth Floor executives negotiating with top Dallas police and park department officials to find ways to get rid of Groden.

It got ugly. On one occasion Groden, who has been in ill health for some years, was arrested and jailed overnight. In jail he was denied access to his medications.

Groden’s protector and champion throughout his legal travails, attorney D. Bradley Kizzia, said this week: “We do hope that this is a sign that the city will change their ways and stop harassing Robert out in Dealey Plaza even if they are requested to do so by outside interests.”

Kizzia said his hope is that Groden will “continue to perform the public service he performs in Dealey Plaza, providing information to people who are interested in the subject matter and his point of view, which may be different from the point of view primarily disseminated in close proximity.”

Groden told me earlier this week: “My feeling is that people have a right to know that there is an alternative to the official version. It is important to know that President Kennedy died for what he believed in. We owe it to him as a people to try to get the truth out.”