Namedropper: That Time I Played Guitar for Jimmy Page 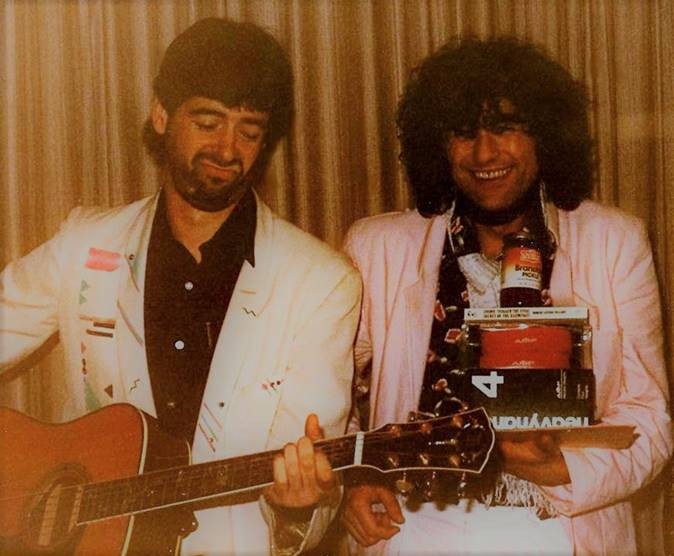 Mark Bowman
The photo that proves it happened. Jimmy Page is to the right, Bucks Burnett at left with guitar.

Bucks Burnett has met most of his music idols. In this monthly column he shares tales from the front lines and backstage.


When I saw Led Zeppelin in Dallas in early March 1975, during the Physical Graffiti tour, it started a chain of events that ended with the extremely unlikely photograph above. That’s me playing an acoustic guitar beside a snickering Jimmy Page, ten years later in Austin in March 1985. The song we’re playing is a Namedropper original called “Dirty Dog.”

If you’re asking just how the hell I ended up playing that song to a legendary artist, don’t feel bad. Jimmy is probably curious, too.

In 1982 I was on a road trip with my best friend since first grade, Eric “Spoonhead” Randolph. We took his legendary black van to California so he could check out UCLA. I was just along for the ride. Somewhere around Arizona, we made a visit to a rest stop. As we walked to the water fountain, two scrawny name tag shirt-wearing guys were taking turns sipping.

As one bent his head down to take a drink, he looked up at his friend and said, “I’ll tell ya one thing for sure. Their water sure turns brown when you flush the toilet!”

As he drank his friend laughed and said, “You are a dirty dog!” The guy sipping quickly replied, “I ain’t the dirty dog — you’re the danged ol’ dirty dog!”

Eric and I watched in awe as they walked back to their big truck, calling each other dirty dogs, each making the other out to be the dirtier dog, complete with growling and barking noises, their voices dimming into the distance.


If Mark hadn’t taken the picture, we would still be telling the story, but no one would believe us.

“Eric,” I asked, “what does that mean, about the water turning brown when they flush the toilet?” “I have no idea, but I’ll tell you one damn thing …” “What’s that?” I asked. “You’re a dirty dog!” “I ain’t no dirty dog, you’re the damn dirty dog!” We then growled and barked and dirty dogged it back to the van, just as the two men had done before us.

For the rest of that trip, and indeed our whole lives, it has been dirty dog this, dirty dog that. An overheard remark in 1982 that we never understood has shaped us ever since. We made a song, with predictable lyrics:

The way the melody is constructed allows for the words to be sung in a tape loop, for as long as one cares to. It is the world’s most pointless mantra.

Three years later, I sang the song to Ronnie Lane of the Small Faces. He cracked up and, in a very bad Southern accent, joined in. Ronnie really liked the song, so we would always sing it with each other in his apartment, where I was living, serving as his butler and personal assistant.

We sang it backstage for Eric Clapton one night, and his backup singer Shaun Murphy worked part of it into her solo number that evening, moaning about her dirty dog lover. 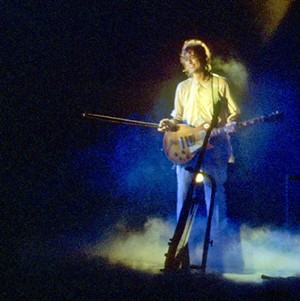 Jimmy on stage in Houston in 1985.
Bucks Burnett
Our great friend Mark Bowman, a Houston photographer, would sometimes sing it with us when he visited the apartment. On March 21, 1985, The Firm (Jimmy Page and Paul Rodgers) played Houston, and Jimmy gave Ronnie, Mark and me seats onstage near his playing spot. Mark and I took pictures.

The next night, Jimmy visited Ronnie at our apartment, and at one point in the conversation Ronnie looked at Jimmy and randomly said, “Jimmy Page, you are a dirty dog!” Jimmy, thinking he was being dissed, squinted his eyes and shot back, “I’m not the dirty dog, you’re the dirty dog. You’re the dirty rabid dog!” Game over.

But he did invite us to see The Firm the next night in Austin, and got us each a room in the band’s hotel, the fabled and belated Mansion Hotel. I had my own suite, courtesy of Mr. Page.


If Mark hadn’t taken the picture, we would still be telling the story, but no one would believe us.

After the concert, we had a small party in Ronnie’s room. Our friend Gloria Galasso had set up an acoustic guitar on a stand in the room in front of the curtains. At one point, Ronnie said, “Bucks, play the dirty dog song for Jimmy!” I nervously picked up the guitar, plunked out the melody in single notes, and sang to Jimmy, “You dirty dog, you’re a dirty dog, you dirty dog, you dirty dog.” I repeated it a couple of times and put the guitar back on the stand.

It was a short concert, about 30 seconds.

Mark Bowman managed to get a photo of it as it happened. Jimmy was holding a pile of gifts we had all given him, and was laughing the whole time I sang the song. After a few more minutes he wished us all farewell and the party lingered on.

That was 32 years ago this month, on March 23, 1985, the night I played and sang “Dirty Dog” for Jimmy Page in Austin. If Mark hadn’t taken the picture, we would still be telling the story, but no one would believe us.